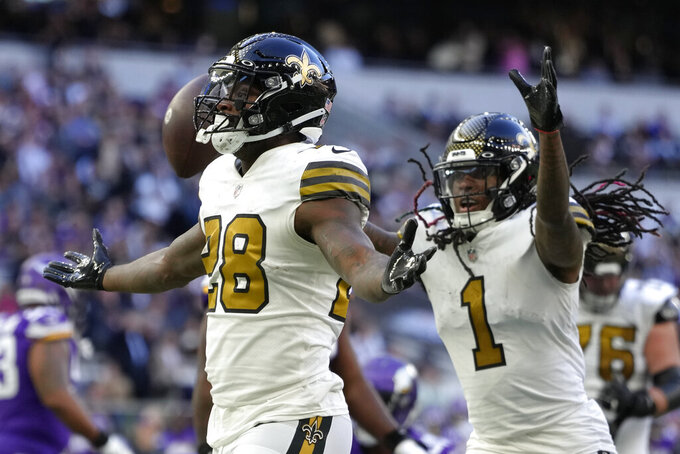 New Orleans Saints running back Latavius Murray (28) celebrates after scoring a touchdown during the third quarter of an NFL match between Minnesota Vikings and New Orleans Saints at the Tottenham Hotspur stadium in London, Sunday, Oct. 2, 2022. (AP Photo/Kirsty Wigglesworth)

The Broncs played Williams on season-ending IR with a torn ACL. They also put outside linebacker Randy Gregory on IR. He needs arthroscopic knee surgery and will miss at least a month, if not longer.

Both were hurt in the Broncos' loss at Las Vegas on Sunday.

Murray is a 10th-year pro who has appeared in 128 NFL games with the Raiders, Vikings, Ravens and Saints.

“Just having that guy, a guy that has done it for so long, has tons of experience, can pass protect and catch, is something that’s great for our team,” coach Nathaniel Hackett said after Murray’s first practice Tuesday. “Also as a person, as a leader. I’m very happy that he’s here.”

Hackett demurred when asked if Murray will play Thursday night when the Broncos (2-2) host the Colts (1-2-1),

“We’re still working through that, he just got here," Hackett said. "So we’re just going to get a feel for that, and we’ll see what’s best for him.”

Murray just played Sunday in London, where he ran for 57 yards and a touchdown on 11 carries in the Saints' 28-25 loss to the Vikings.

He reverted to New Orleans' practice squad Monday and was snared by the Broncos, who had a brutal game in their backfield against the Raiders.

Not only did Williams tear his right ACL and LCL on his first second-half carry in the Broncos' 32-23 loss, but Melvin Gordon had a fumble that was returned for a 68-yard touchdown and Mike Boone had multiple drops and missed a couple of blitz pickups.

Gordon has fumbled in five consecutive games and now has 25 fumbles, 18 of which have been recovered by the opponent.

“I just think it’s about finishing the play with the ball tucked up. It’s that simple, wrist above the elbow, all that kind of stuff," Hackett said Tuesday. "He just sometimes wants to get an extra yard and sometimes that’s not as important.

"But he’s running hard, he’s doing a great job. He came today with a vengeance. We had a great mental day with him, and so we’re ready to go with it.”

Hackett wouldn't say who will start at running back against Indianapolis, however.

“We’re still working through all that, too," he said. "It’s been a short week, so we’ve just been trying to get the game plan in, and we’ll see how all that works out.”

Offensive coordinator Justin Outten indicated, however, that Gordon will get the bulk of the carries in spite of his fumbling issues.

“We have to lean on him now,” Outten said, adding, ”He's going to carry the load obviously ... but we trust Melvin going forward here.”

QB Russell Wilson, who played at Wisconsin with Gordon, has been working to bolster his running back's spirits after his latest blunder.

“I told him the truth. The truth is that he’s one of the best running backs to play this game,” Gordon said. “He’s scored more touchdowns than most guys that are playing right now. He’s done an amazing job of getting into the end zone.

“I think if there’s one thing he’s got to do, that’s keep covering that thing up, which he was trying to in that game and he got hit pretty good,” Wilson added. “The reality is I have all of the confidence in the world in him and same with this football team. There’s no blink of an eye by him."

Wilson is dealing with a sore right (throwing) shoulder, but said he'll have no limitations in the game.

“I’m doing good, hanging in there. I think when you play a competitive game, you get banged up a couple of times here and there,” Wilson said. “I’m excited for Thursday night, what a special time, what an opportunity for us.”

NOTES: RT Billy Turner (knee) practiced for one of the few times since his signing six months ago. He was limited and there still is no indication he's ready to make his Denver debut.