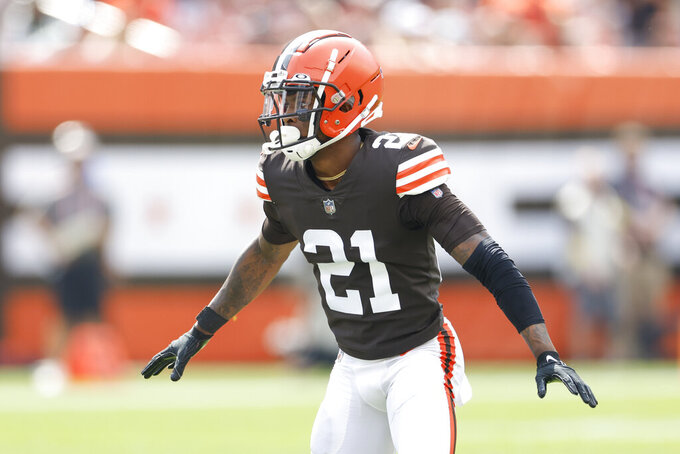 FILE - Cleveland Browns cornerback Denzel Ward (21) plays against the New York Jets during the first half of an NFL football game on Sept. 18, 2022, in Cleveland. The Browns Pro Bowl cornerback will play Sunday, Nov. 13, at Miami after missing Cleveland's past three games with a concussion sustained on Oct. 9. (AP Photo/Ron Schwane, File)

BEREA, Ohio (AP) — Sidelined three weeks by a concussion, Denzel Ward agonized during his absence over not being able to help the Browns.

That's about to change.

“Can't wait,” said Ward, who will play Sunday when Cleveland visits the Miami Dolphins to begin a critical three-game stretch that will determine whether the Browns (3-5) can make a playoff push when suspended quarterback Deshaun Watson returns.

A two-time Pro Bowler, Ward has been out since sustaining the head injury — his third known concussion in five seasons — on Oct. 9 against the Los Angeles Chargers. The 25-year-old was attempting to tackle running back Austin Ekeler at the end of a 17-yard run, when he banged his head hard on the turf.

Ward, who was cleared from concussion protocol and returned to practice Monday, said he grew frustrated as his symptoms lingered.

"It's tough,” he said. "Throughout that whole time, I was having headaches every day and then in the protocol. If you’re having any symptoms, you’re not able to really progress. So I was kind of concerned a little bit, just like: When are these headaches gonna go away?

“When am I gonna start feeling better? But I was able to overcome that and glad to be here now.”

Ward missed losses against New England and Baltimore, and a win over Cincinnati. The bye week gave him extra time to recover without having to miss any more time, and he'll be back against Miami.

Ward noted the league's concussion protocol was harder “in a good way” since he suffered two concussions as a rookie in 2018.

Interestingly, the more stringent requirements were the result of the backlash the league received in its mishandling of Dolphins quarterback Tua Tagovailoa, who suffered a scary head injury earlier this season.

Ward said he's not overly concerned about having multiple concussions during his career.

“It’s not affecting me right now, so I’m good,” he said. “My focus is on football, but I mean, I do want to take care of my health then make sure I’m good and try to do the things I can to prevent it from happening again and just to keep my health up.”

Ward's return comes at an ideal time for the Browns, who will have to slow speedy Dolphins receivers Tyreek Hill and Jaylen Waddle, arguably the league's most dynamic receiving duo, to have any chance.

Hill leads the NFL with 1,104 yards receiving, Waddle is fifth with 812 and the pair have combined for nine touchdowns along with making numerous breath-taking plays after catching Tagovailoa passes.

Ward is one of the league's fastest corners and will likely draw the primary assignment of covering Hill, no stranger to the Browns from his days with Kansas City. In last year's season opener, Hill scorched Cleveland for 11 catches for 197 yards.

Despite the numbers, Ward thought he had a “solid” game against Hill.

“But obviously not good enough to get a win,” said Ward, who signed a five-year, $100.5 million contract extension in April.

Browns defensive coordinator Joe Woods has been impressed with Hill's development. Once mainly a specialist with the Chiefs, he's become one of the game's most electrifying players.

“He's so fast, and he's so quick," Woods said. "Everybody talks about the vertical speed, but if you throw him something short and you miss the tackle, he might go 70 (yards). He is definitely a handful to deal with, but we are familiar with him, and there are a couple of different things we will try to do to slow him down.”

And that's why Ward's return is so vital.

While he may not have Hill's wheels, Ward's experience can help the Browns keep pace.

“It's definitely good to have him back,” Woods said. "I feel confident in all of the guys we had back there, but to add that element of speed and somebody who has played against Tyreek in the past, it definitely gives you confidence.

"There are certain things that I will be able to do coverage wise knowing that he can go match up at times.”

NOTES: LB Jeremiah Owusu-Koramoah and TE David Njoku didn't practice again due to knee injuries and their status for Sunday looks shaky. ... CB Martin Emerson Jr. returned after missing Wednesday with an unspecified illness. ... Watson will to return to practice next week and be eligible to play on Dec. 4. Offensive coordinator Alex Van Pelt said QB Jacoby Brissett has been “outstanding” while filling in for Watson, and appreciates it may be awkward to bench a player performing at a high level. “It's a good-bad decision,” he said. "It's tough, but it's good. We are going to have two really good players that we feel comfortable we can win a lot of games with.”