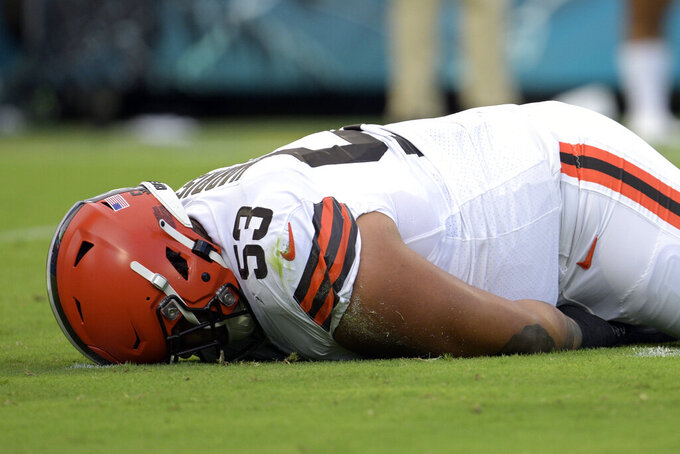 FILE - Cleveland Browns center Nick Harris (53) lays on the turf after he was injured during the first half of an NFL preseason football game, Friday, Aug. 12, 2022, in Jacksonville, Fla. (AP Photo/Phelan M. Ebenhack, File) 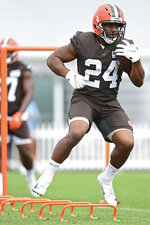 BEREA, Ohio (AP) — The Browns lost their new man in the middle.

Starting center Nick Harris was officially placed on injured reserve Tuesday and will miss the season with a knee injury suffered on the second snap of Cleveland's exhibition opener last week in Jacksonville.

Harris, who was slotted to replace JC Tretter after the Browns released the reliable veteran center after five seasons, got hurt while dropping back to protect quarterback Deshaun Watson when his knee gave out and he crumpled to the grass.

Browns coach Kevin Stefanski did not provide any specifics on Harris’ injury, and the team has not disclosed whether he’s undergone surgery. Harris was seeking a second opinion before opting for an operation.

“I've spoken to him every day,” Stefanski said before Tuesday's workout, the final training camp practice in front of fans. "It's hard when you are hurt. It's no fun. It's terrible. Everybody hates it. He's a positive person. He will get through this, and we will help him get through it.”

Harris' injury is the second significant one for the Browns in training camp. Last week, return specialist Jakeem Grant Sr. tore an Achilles tendon during practice and will miss the season. Cleveland signed the Pro Bowler in the offseason to jumpstart its dismal return game.

A fifth-round pick in 2020, Harris had bulked up during the offseason and was on track to replace Tretter, who remains a free agent. The Browns like Harris' mobility and viewed him as a younger upgrade for one of the league's best offensive lines.

With Harris out, the Browns have moved Ethan Pocic, signed as a free agent in March, into the starting lineup. Hjalte Froholdt, Michael Dunn and Brock Hoffman have gotten reps at center, but the Browns could still look outside the roster for help at the vital position.

Cleveland's interior depth took another hit Monday when rookie Dawson Deaton, a seventh-round pick from Texas Tech, tore his anterior cruciate ligament early in practice. Stefanski did not say how Deaton got injured.

Rookie kicker Cade York put on another show in practice, making 6 of 6 field goals, including a 54-yarder that might have been good from 70.

The fourth-round pick from LSU has only missed two kicks the entire camp. On Tuesday, local writers voted him the Maurice Bassett Award winner, an honor given to the team’s top rookie in camp. Bassett played for the Browns in the 1950s.

“He works hard at his craft,” Stefanski said. “That's really the big part for me with all these rookies, but Cade in particular was working hard every single day. There are days he does not kick where he's working on his body or he's watching the tape and those type of things.”

The Browns are off Wednesday. It's not known if Garrett will be back for practices against the Philadelphia Eagles on Thursday and Friday. The teams will play at FirstEnergy Stadium on Sunday.

NOTES: Starting RT Jack Conklin took part in some team drills for the first time since he tore his patellar in November and underwent season-ending surgery. Conklin had been limited to individual work in camp. ... WR Anthony Schwartz hauled in a long TD pass from Jacoby Brissett during two-minute drills. Schwartz is looking to bounce back after dropping two passes from Watson against the Jaguars. ... Rookie DE Isaiah Thomas is expected to miss several days with a hand injury suffered Monday. Thomas has a cast on his right arm. ... CB Greg Newsome II (hamstring), DE Chase Winovich (hamstring) and WR Michael Woods II (hamstring) also sat out.