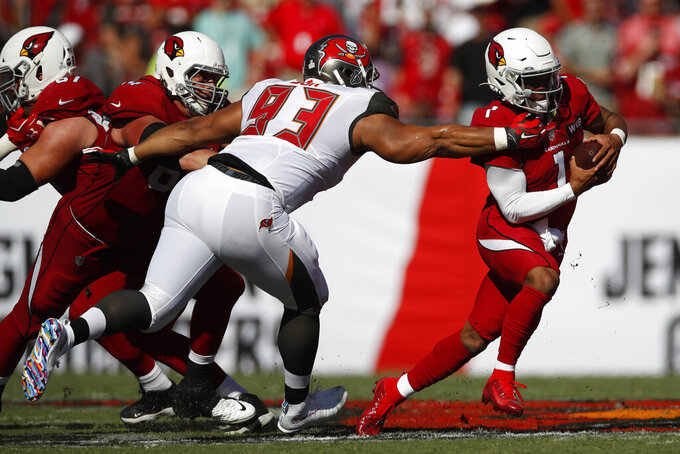 Keeping an improved defense together was one of the club’s top priorities in free agency. Re-signing tackle Ndamukong Suh to a one-year, $8 million contract on Friday ensures the entire front seven will remain intact for next season.

The move comes on the heels on placing the franchise tag on NFL sacks leader Shaquil Barrett, re-signing linebacker Jason Pierre-Paul to a two-year, $27 million deal, and luring Brady from New England with $50 million guaranteed and the chance to join some dynamic young offensive playmakers.

The Bucs led the NFL in run defense in 2019, with Suh starting all 16 games after helping the Los Angeles Rams reach the Super Bowl the previous season.

“The No. 1 goal for me coming out of last season was to continue to build on defense. The only way to build is to keep everyone in place and grow. It’s huge,” coach Bruce Arians said.

“They’ll be so far ahead of our offense, if and when we get back out on the field. I think our offense will catch up pretty fast,” Arians added. “We did some really nice things last year and we got better and better, especially those last six weeks of the season.’’

Suh, whose streak of 131 consecutive starts is the longest among NFL defensive linemen, had 41 tackles, 14 quarterback hits and 2½ sacks in his first year with the Bucs.

The 33-year-old returned two fumbles for touchdowns, matching the most in a single season since the 1970 NFL-AFL merger.

Tampa Bay, meanwhile, rallied from a slow start to go 4-2 down the stretch in 2019, largely because of a stout run defense anchored by Suh and Vita Vea; an improved pass rush featuring Barrett and Pierre-Paul; and a young, inexperienced secondary that steadily got better.

The Bucs limited opponents to just 73.8 yards per game rushing.

“I wanted the entire defense, if we could, to stay together. They played so well together; each piece of the puzzle knew each other,” Arians said. “Suh was a big, big part of it obviously – not as much in the sack game as much as his interior pressure and the great job he did against the run.”

The No. 2 overall pick in the 2010 draft has also played for the Detroit Lions and Miami Dolphins during a career that includes three All-Pro selections. He has 58½ career sacks, along with eight fumble recoveries, four forced fumbles, an interception and three defensive TDs.

In addition to placing the franchise tag on Barrett ($15.828 million) and re-signing Pierre-Paul and Suh, Tampa Bay has struck deals the past week to retain three of its other unrestricted free agents: linebacker Kevin Minter, safety Andrew Adams and defensive lineman Rakeem Nunez-Roches.

Barrett led the league with 19½ sacks last season. Pierre-Paul had 8½ in 10 games after sitting out the beginning of the year while recovering from a neck injury suffered in an automobile accident.