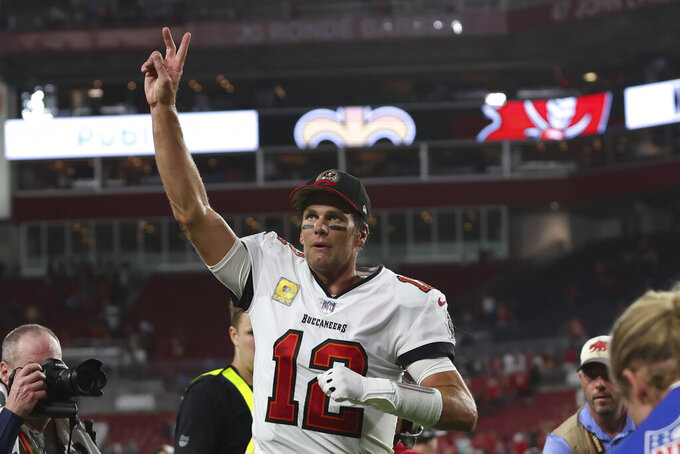 TURNOVER DIFFERENTIAL: Seahawks plus-3; Buccaneers plus-2

SEAHAWKS PLAYER TO WATCH: Rookie RB Kenneth Walker III is proving to be a young, burgeoning star. Walker had his second 100-yard rushing game of his first season last week against Arizona, rushing for 107 yards and two touchdowns. Walker has more than held his own since Rashaad Penny was lost for the season to injury, rushing for 424 yards in his four starts. Walker can become just the second rookie in the past 10 seasons and the fourth since 2000 to rush for a touchdown in six consecutive games with a TD run on Sunday.

BUCCANEERS PLAYER TO WATCH: With his start in Germany, Tom Brady becomes the first quarterback to start NFL regular-season games in three countries outside the United States. He’s 3-0 in international starts, leading the New England Patriots to victories in Mexico City (2017) and London twice (2009, 2012). His 125.2 passer rating in those games in the highest among QBs who have made multiple starts outside the U.S. He’s second in the NFL with 2,547 passing yards this season and hasn’t thrown an interception since Week 1, a career-best streak of 373 consecutive attempts without a pick. The longest such streak in league history is 402, set by Aaron Rodgers in 2018.

KEY MATCHUP: Bucs struggling offensive line against Seahawks defense, which ranks 27th against the run but also is tied for fourth in the NFL with 27 sacks. The Bucs are last in the league in rushing, averaging 3 yards per carry and 60.7 yards per game. But they’d like to run the ball more to take some of the burden off Brady, and figure to try it against the Seahawks with Leonard Fournette (405 yards, two touchdown) and rookie Rachaad White (117 yards, one TD) sharing the workload.

SERIES NOTES: The Seahawks and Buccaneers both began play as expansion franchises in 1976, but have only faced each 14 times. Seattle has won two of the past three meetings and leads the series 9-5 overall.

STATS AND STUFF: Coach Pete Carroll will tie Paul Brown for 17th on the career wins list with 170 — regular season and playoffs combined —with one more victory. ... The Seahawks have won four straight games, all by 10 or more points. It's the first time the Seahawks have accomplished that since the end of the 2014 season. ... QB Geno Smith leads the NFL in completion percentage and is third in passer rating. He’s the only QB in the league this season with seven games of at least two TD passes. ... Since Week 5, Walker has the most rushing touchdowns in the league with seven. ... WR Tyler Lockett needs one TD to move into second place in franchise history for touchdown catches with 50. ... Seattle ranks fourth in the league with 27 sacks, 19 of those coming in the past four games. Edge rusher Uchenna Nwosu has already set a career high with seven sacks this season. ... The Seahawks lead the NFL with 16 forced fumbles. Rookie CB Coby Bryant has a league-high four forced fumbles. ... LB Jordyn Brooks leads the league in solo tackles (64) and combined tackles (90). ... Buccaneers QB Tom Brady became the first player in NFL history with 100,000 passing yards during last week’s win over the defending Super Bowl champion Los Angeles Rams. ... The 45-year-old, seven-time Super Bowl champion has thrown for 1,270 yards in four starts against the Seahawks, including postseason. ... WR Mike Evans is 82 yards shy of becoming the first player to amass 10,000 yards receiving in a Tampa Bay uniform. He’ll be the 48th player in league history to reach the milestone and join Jerry Rice, Calvin Johnson, Marvin Harrison, Randy Moss and Larry Fitzgerald as the only receivers to have 10,000 yards and 75-plus TD catches within the first nine seasons of a career. ... DT Vita Vea leads the Bucs with a career-best 6½ sacks. ... Tampa Bay’s defense has not forced a turnover in five consecutive games. ... Since the start of the 2019 season, the Bucs have scored a league-high 361 points off takeaways.

FANTASY TIP: Evans has 20 receptions, averaged 142 yards receiving and scored three TDs in two games against the Seahawks. He had 12 catches for 180 yards and a TD the previous time he faced them, and is looking for his third straight against Seattle with at least eight catches, 100-plus yards and a TD.