Cardinals fail on late chances in 20-17 loss to Eagles 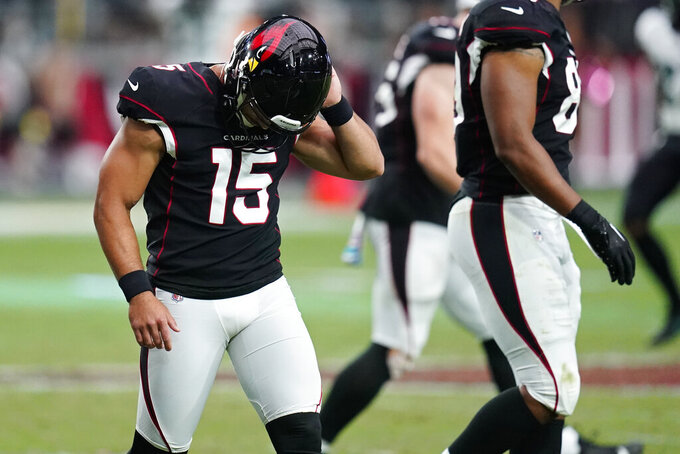 Arizona Cardinals' Matt Ammendola walks off the field after missing a field goal attempt against the Philadelphia Eagles during the second half an NFL football game, Sunday, Oct. 9, 2022, in Glendale, Ariz. (AP Photo/Ross D. Franklin)

GLENDALE, Ariz. (AP) — Kyler Murray found receivers on quick hitters and broke off chunk runs on designed keepers, setting up the Arizona Cardinals for a tying field goal, perhaps even the winning touchdown.

It all fell apart with a short slide, a third-down spike and a missed kick, pushing Arizona to its longest home losing streak in 64 years.

Forced to try a 43-yard field goal after spiking the ball on third down, the Cardinals lost 20-17 to the Philadelphia Eagles on Sunday when Matt Ammendola pushed his kick wide right with 17 seconds left.

“Everybody played hard, we just didn't get it done,” Cardinals coach Kliff Kingsbury said. “You hate to lose those.”

The Cardinals (2-3) got off to another slow start, falling into a 14-0 hole by early in the second quarter. They've been outscored 38-0 in the first quarter this season.

Arizona started to find a rhythm offensively to pull ton 14-10 at halftime and shut down the Eagles (5-0) most of the second half.

Led by Jalen Hurts in the fourth quarter, Philadelphia picked its way down the field to set up Jake Elliott's 23-yard field goal to cap a 17-play, 70-yard drive that lasted nearly eight minutes. Hurts, who scored on two 1-yard keepers in the first half, twice kept the drive alive following big pushes by the Eagles' offensive line on third-and-1.

Arizona started the final drive on its own 25 with 1:45 left — plenty of time for Murray to orchestrate another late drive.

The Cardinals got off to a good start. Murray twice took off on designed runs for a combined 24 yards and completed four passes — he missed an open Zach Ertz on another — and reached Philadelphia's 34 with 37 seconds left.

After spiking the ball to stop the clock, Murray took off up the middle, sliding for what appeared to be another first down. The officials saw it differently, marking him a yard short.

“At that moment, I was trying to get down as quick as possible to save as much time as possible,” Murray said. “Hindsight, I would have loved to get more yards or 1 yard — whatever it was.”

Kingsbury was standing right at the line to gain and, thinking Murray had slid past the first down marker, called for a spike to stop the clock with 22 seconds left. That would have been plenty of time to try a pass or two to get closer for Ammendola, but trying to run another play on fourth down was too risky.

“By that time, we committed to clocking it,” Kingsbury said. “Twenty-two seconds left, you ran it there, don't get it and we have a hurricane field goal with a new kicker. We were past the point of no return.”

That left Arizona's chances on the foot of Ammendola.

Ammendola went 3 for 4 in two games for Kansas City in place of injured starter Harrison Butker and signed with the Cardinals to replace Matt Prater, who was out with a hip injury.

Ammendola's kick looked good at the start, but veered hard right, sending the undefeated Eagles rushing out in celebration.

“It's like golf; sometimes you might slice the ball ever so slightly,” Ammendola said. “It felt good off my foot. It's something I'm not going to get back.”

Neither will the Cardinals. They have lost all three home games this season and eight straight over two seasons, longest since an eight-game losing streak from 1956-58.

“We've got to find a way to win at home,” Kingsbury said. “We play really good on the road and for whatever reason we haven’t gotten done here.”