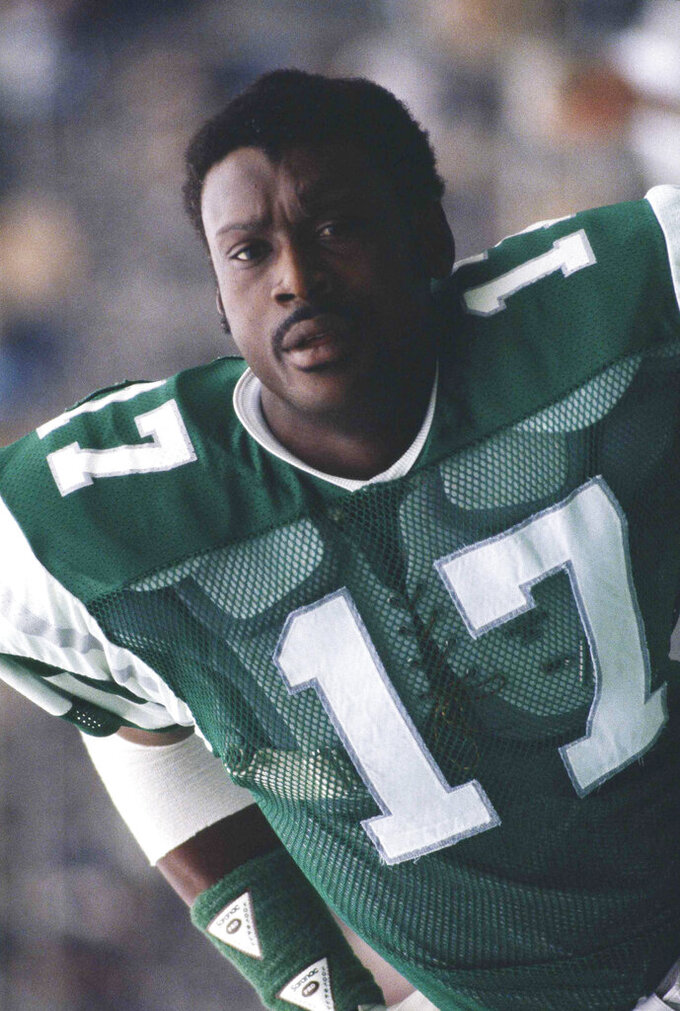 FILE - In this Dec. 14, 1980, file photo, Philadelphia Eagles' Harold Carmichael stands during the team's NFL football game against the St. Louis Cardinals in Philadelphia. Next month, Carmichael will use those longs arms to put on his gold jacket in Canton. “To be inducted, to get that gold jacket, and get that bust and get that ring is very exciting for me,” he said. (AP Photo/Clem Murray, File)

PHILADELPHIA (AP) — Built more like an NBA player at 6-foot-8, Harold Carmichael turned to football because he couldn’t perform basketball’s most basic skill.

“I loved basketball but I could never dribble,” Carmichael said. “If I could dribble, I would’ve never played football.”

It worked out for the best. Carmichael used his size to outjump and overpower defenders, catching more passes for more yards and touchdowns than any player in the history of the Philadelphia Eagles.

The gentle giant then waited patiently for three decades before he was elected to the Pro Football Hall of Fame as part of last year’s special centennial class.

“About 10 years ago, I was laying in bed just thinking about things, wondering why I’m not in the Hall of Fame, why this and why that,” Carmichael said. “And I stopped and said: ‘Harold, you’ve been blessed, man.’ I felt God was saying to me just wait, be patient. This is very special because God put me in this position to be in the centennial class. We’re in a special class and that’s very exciting, and the patience that I didn’t have, God put it in my life to be patient, be courageous and just believe, have the faith. And I kind of started believing that I’m going to get in here.”

It’s been a long journey for Carmichael, who grew up in Jacksonville, Florida, and attended William M. Raines High School. Carmichael briefly played the trombone in the school’s band until one day at practice he couldn’t figure out what to play.

“It was embarrassing,” he said. “I walked out and saw the basketball team practicing and went out for the team.”

Carmichael had skills on the court despite his dribbling issues. He tried out for football as a freshman and sophomore but couldn’t make the team.

“I couldn’t get past the calisthenics,” he said.

Carmichael eventually made the football team as a junior and played quarterback and safety as a senior.

“I got hit more than anybody because my offensive line was terrible,” he said. “I threw one touchdown pass and ran a broken play in for a touchdown. That was it.”

Carmichael also joined the baseball team his junior season and played third base. He said he had a tryout with the Pittsburgh Pirates as a senior but forgot to bring his cleats.

He walked-on at Southern University and played center on the basketball team, threw the javelin and discus for the track and field team, and moved to wide receiver on the football team.

“When I saw Harold, I figured he was a basketball player and what is he doing out here?” said Mel Blount, a teammate at Southern who became a Pro Football Hall of Fame safety with the Pittsburgh Steelers. “But then after you see him run routes and catch the football, you see he’s a tall receiver. The thing about Harold is he was different, he knew he was different, and if that ball was anywhere in his zone, he’s going to catch it.”

Carmichael never led his college team in receptions and didn’t think about playing in the NFL. He figured the 1971 NFL draft ended after the first six rounds because the rest of it wasn’t televised. Then he got the call from his agent that the Eagles had selected him in the seventh round with the 161st overall pick.

Carmichael caught 20 passes in each of his first two seasons. After the Eagles traded Pro Bowl wideout Harold Jackson to the Rams following the 1972 season, Carmichael got a chance to start. He had 67 receptions for 1,116 yards and nine TDs in 1973, making the first of four Pro Bowl appearances.

In 1979, Carmichael set a then-NFL record by catching at least one pass in 106 consecutive games. The game against the Cleveland Browns at Veterans Stadium was stopped to celebrate the accomplishment and Carmichael received a 12-foot trophy. The trophy was later loaned to the Hall of Fame and Carmichael hasn’t seen it again.

“I’ve been there a couple times and it’s not there anymore. I wonder if they used that as firewood,” Carmichael joked.

He extended the streak to 127 games the next season and helped the Eagles win the NFC championship that year. But they lost to the Raiders in the Super Bowl.

Carmichael finished his career with 590 catches for 8,985 yards and 79 TDs. All but one catch for 7 yards came with the Eagles. He played two games for the rival Dallas Cowboys in 1984.

“I wonder if I would’ve been drafted (now) because everybody is looking for those 4.2 guys, and I was nowhere near that,” he said. “I had to make good of my size, putting myself between the football and a defensive player. That’s how I kind of got around without that speed, trying to catch anything that came close to me — within 3 yards of me — with these long arms.”

Next month, Carmichael will use those longs arms to put on his gold jacket in Canton.