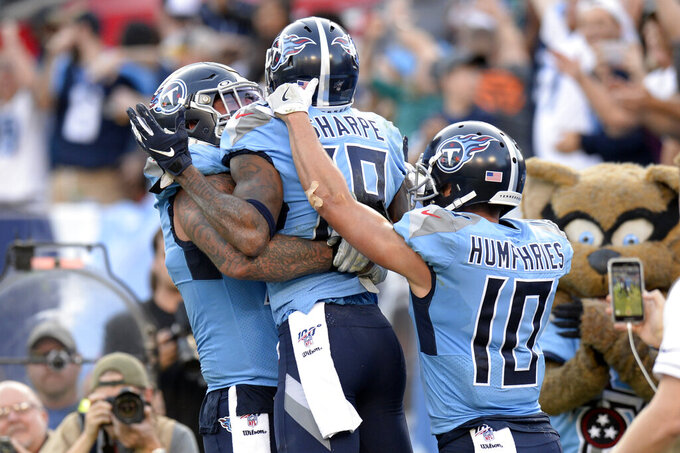 Not once, twice but thrice.

Each time, they needed the replay official to overturn the call on the field turning what the Chargers thought were a pair of go-ahead touchdowns and a final ruling that gave the ball — and the game — to the Titans.

Jurrell Casey recovered a fumble by Melvin Gordon at the goal line with 15 seconds left, and Tennessee pulled out a 23-20 victory Sunday over the Chargers after a frantic final minute.

Gordon initially was ruled down shy of the goal line at the 1. Casey came out of the pile with the ball, and the Titans started celebrating. The play was reviewed and overturned the on-field ruling that Gordon was short of the goal line.

The call was a fumble forced by Titans linebacker Wesley Woodyard that was recovered by Casey for a touchback. Ryan Tannehill knelt down to run out the clock as the Titans (3-4) snapped a two-game skid.

The Chargers thought they had scored the go-ahead touchdown not once but twice in the final 44 seconds only to lose both on review by the replay official. That official also overturned Gordon being stopped on the Chargers' final play.

"You don't get 1 yard, you don't deserve to win the damn game, and that's the way it is," Chargers coach Anthony Lynn said. "We had 1 yard to win this game, and we let it slip out of our hands."

First, Philip Rivers' pass that Austin Ekeler took 16 yards was ruled a touchdown only to be reversed by the replay official for not breaking the plane as he was tackled by Kenny Vaccaro and Logan Ryan at the 1. After a false start, Malcolm Butler then was flagged for defensive pass interference on Mike Williams in the end zone.

Then Gordon went over right tackle with 34 seconds left for what officials ruled a 1-yard TD, and the replay official then reversed the call for the second time in what became a run for no gain. That set up Gordon's final run with 19 seconds left.

"They obviously saw enough to overturn it," Rivers said. "I just didn't."

Titans coach Mike Vrabel said there has to be obvious visual evidence the ball had come out and a clear recovery.

"By the grace of God, we had both of those in that play for it to be able to be overturned," Vrabel said.

Tannehill threw for 312 yards and two touchdowns in his first start since the Titans benched Marcus Mariota looking for a spark on offense. Tannehill came through as the Titans not only won their first game at home this season but posted a season-high 403 yards. He was 23 of 29 to outduel Rivers on a day the 16-year veteran moved to sixth in career passing yards.

The Chargers (2-5) have lost three straight and five of their past six.

Rivers and the Chargers thought they had pulled off an amazing comeback after trailing 23-13 with 6:39 left. Rivers threw a 41-yard TD pass to Ekeler with 5:09 left.

The Chargers stopped Tannehill short on fourth-and-inches near midfield, and Rivers put the Chargers ahead with a 16-yard TD pass to Ekeler inside the final minute. But Ekeler was ruled down short of the goal line to set up an astounding final minute of the game.

"On the field, we won it twice," Chargers tight end Hunter Henry said.

Jeffery Simmons, the No. 19 pick overall in the April draft, also made his NFL debut with a sack and a tackle for loss.

Tannehill threw an 8-yard TD pass to Corey Davis just before halftime, and he hit Tajae Sharpe on a 5-yard TD pass with 13:11 left. Derrick Henry put Tennessee up 23-13 with 6:39 left with an 11-yard TD run.

The Titans held the Chargers to a pair of field goals by rookie Chase McLaughlin in the first half.

Rivers passed a pair of fellow 2004 draft picks in career passing yards during the second quarter. Rivers needed only 105 yards to pass Eli Manning (56,537) and Ben Roethlisberger (56,545), and he had 77 yards by the end of the first quarter and 158 by halftime to keep climbing that list. He finished throwing for 329 yards and two TDs.

The Chargers already were banged up on the offensive line with center Mike Pouncey out for the season and left tackle Russell Okung trying to work his way back from the non-football injury list with blood clots. Then left guard Forrest Lamp hurt an ankle midway through the second quarter and was carted from the sideline to the locker room. Dan Feeney moved from center to guard, and Scott Quessenberry came in at center.

The Titans lost right tackle Jack Conklin early to an injured right thigh early, and Dennis Kelly replaced him. Jamil Douglas started the third quarter at right guard with rookie Nate Davis hurting a rib. Linebacker Rashaan Evans left late in the first half only to return for the second half. Cornerback Adoree Jackson hurt a foot in the third quarter.

Chargers: Continue their two-game road swing at Chicago on Sunday.