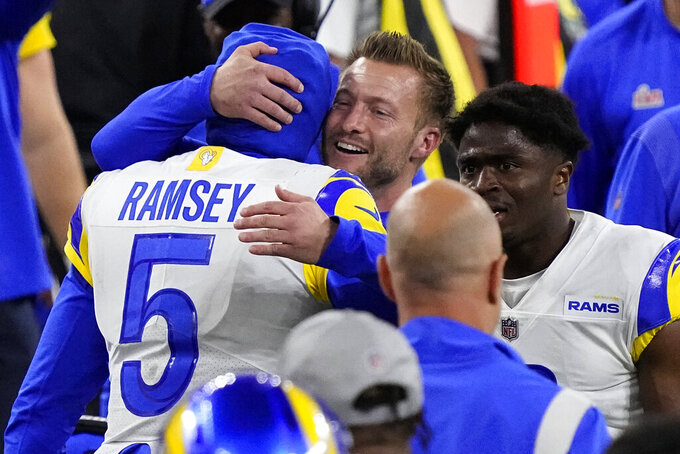 Going all-in paid off for the Los Angeles Rams. They have a shiny new Lombardi Trophy to show for all the money spent on big contracts and draft picks traded away.

While some teams may be tempted to follow a similar path for success - the Denver Broncos just agreed to send a massive haul to Seattle for Russell Wilson - even the Rams know it’s not a wave of the future in the NFL.

“Maybe that’s not for everybody, and maybe that’s not sustainable,” Rams chief operating officer Kevin Demoff said before the Rams beat Cincinnati to win the Super Bowl last month. “Maybe it doesn’t work long term, even though we seem to figure it out every year. But it’s working right now.”

The Rams haven’t had a first-round draft pick since selecting quarterback Jared Goff at No. 1 overall in 2016, and they don’t own another one until 2024. But using four of those first-rounders to acquire Jalen Ramsey and Matthew Stafford helped them become champions.

Despite having no first-round picks since Goff, the Rams have had the second-most draft picks of any franchise since 2017. Finding starters in middle and later rounds is essential.

The Baltimore Ravens prioritized adding compensation picks to give them more assets.

“Years ago, for instance, we felt like we had an opportunity to collect comp picks, and it took a long time for other teams to catch up. Now, everybody is doing it,” Ravens general manager Eric DeCosta said.

With free agency opening next week and the draft coming up next month, teams have opportunities to bolster their roster without dealing valuable picks for high-priced stars. Of course, spending freely has limitations in a salary cap sport. The Rams, Saints, Packers, Buccaneers and Vikings currently are more than $15 million over the threshold, according to figures compiled by Overthecap.com.

“So being patient and trying to develop your roster over time and taking a longer-term approach to it is something that we’re going to try to do. We know we have areas where we’ve got to address them at some point, whether that’s a front-line player or depth, but we’re no different than any other team at this point in time. We have players that we feel pretty good about and spots on our team that we have a little more depth and there’s other areas certainly of need that we need to address.”

The Broncos took a different approach after missing the playoffs the last six seasons.

They’re counting on Wilson, who led the Seahawks to the playoffs eight times in 10 years and started every game until a finger injury last season cost him three games, to make them contenders again. Denver already has a solid nucleus in place with dynamic wide receivers Jerry Jeudy, Courtland Sutton, Tim Patrick and K.J. Hamler, tight end Albert Okwuegbunam and running back Javonte Williams.

Wilson came within a yard of leading the Seahawks to consecutive Super Bowl victories in his first three seasons. He saw Tom Brady join the Buccaneers in 2020 and lead them to a Super Bowl title. Stafford did the same in his first year with the Rams. Wilson doesn’t have to win one in his first season in Denver for the trade to be worth the cost for the Broncos.