Chargers facing offensive line issues with Ravens up next 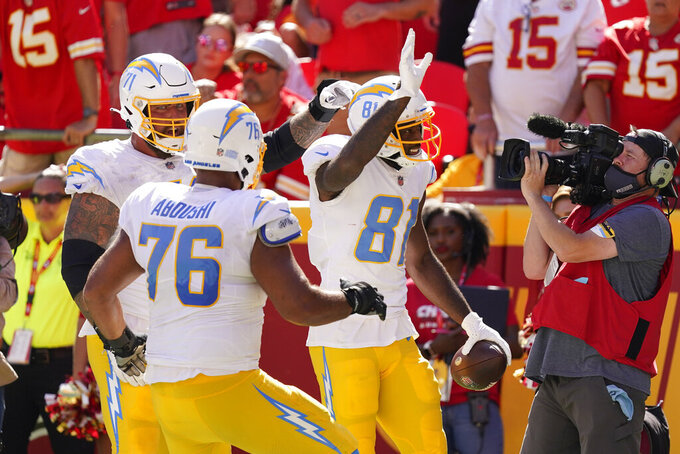 COSTA MESA, Calif. (AP) — It has not been a good start to the week for the Los Angeles Chargers offensive line.

The Chargers found out on Monday that right guard Oday Aboushi would miss the rest of the season after tearing the ACL in his left knee during Sunday's 47-42 win over Cleveland. On Wednesday, the team announced that right tackle Bryan Bulaga will miss more time after having core muscle surgery.

Michael Schofield stepped in after Aboushi was injured and will remain the starter. With Storm Norton filling in at right tackle, center Corey Linsley said that he expects everyone to continue to step up.

“We’ve taken the mentality from Day One in camp of next man up. We’re a cohesive unit. It works like this in every position room, we all rely on each other," Linsley said. “We’re going to keep rolling, it’s just what we have to do.”

Schofield, who played for the franchise from 2017-19, will make his 40th start for the Chargers on Sunday at the Baltimore Ravens in a matchup of 4-1 teams. Schofield started all 18 games at right guard in 2018, when the Chargers made the playoffs.

Lindsley said that Schofield stepped in during last week's game and didn't miss a beat.

“It was awesome. When he came in, I said, ‘Hey, do you need anything? Let me know.’ I don’t think he was ever confused on a single play, which is phenomenal," Linsley said. "He’s only been here a few weeks, but he’s a great add to our room. He’s a great guy, he’s been around a long time. He gets it and all the confidence in the world moving forward.”

Coach Brandon Staley said Aboushi's knee surgery has been scheduled, but did not have the date.

Bulaga played the first half of the Sept. 12 opener at Washington before suffering back tightness during the second half. He was placed on injured reserve five days later. Bulaga, who signed with the Chargers last season but played in only 10 games, also battled groin and back injuries during training camp.

Despite the injuries, Linsley, rookie left tackle Rashawn Slater and left guard Matt Feiler have given the Chargers stability on the line, something they were sorely lacking last season. Justin Herbert has been sacked on 4.1% of his drop-backs, which is seventh-least in the league.

Sunday's best matchup in the trenches will be between Slater and Ravens defensive end Calais Campbell, who has six quarterback hits, but has yet to get his first sack this year. Slater allowed his first sack last week to Browns All-Pro defensive lineman Myles Garrett.

“He’s a great player, you see it on the film. You saw it Monday night, he can disrupt a game. He’s enormous, too; he’s a big guy. That’s part of the reason he’s able to do what he does," Linsley said. "We have to bring it, and it’s going to be a challenge for us. It’s just something we have to work through this week and be ready.”

Notes: Staley also said that linebacker Drue Tranquill has a pectoral injury, but that there continues to be consultations to determine the severity. ... The Chargers held just a walkthrough on Wednesday. WR Mike Williams (knee) and Tranquill did not practice, while RB Justin Jackson (groin) and S Nasir Adderley (hip) were limited.