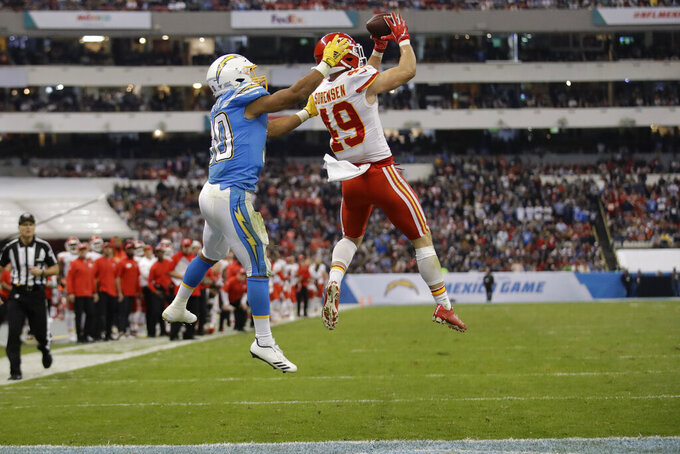 KANSAS CITY, Mo. (AP) — The collective groan could be heard across the Kansas City metro area when Chargers quarterback Philip Rivers drove his team deep into Chiefs territory in the waning minutes of Monday night’s game.

The Chiefs had struggled to put away teams all season, their defensive seemingly unable to come up with stops at critical junctures. It was just one week earlier that they melted down in the final minute in Tennessee, allowing the decisive touchdown with 23 seconds left in a 35-32 defeat.

So forgive all those Chiefs fans for a here-we-go-again mentality.

This time, the Chiefs rose to the challenge.

Daniel Sorensen picked off Rivers on a poorly thrown ball into the end zone, and that allowed the Chiefs offense to kneel the ball once and wrap up a crucial 24-17 victory in Mexico City.

A loss and the Chiefs would have fallen out of first place in the AFC West — all the way out of the playoff picture, in fact. But with a win, they remain firmly in control of the division race.

“I felt like we’ve been challenged a lot this season. We played a lot of good football teams, a lot of good quarterbacks,” Chiefs safety Tyrann Mathieu said. “We’ve been in that situation maybe four or five times this year. And so I think our defense is starting to get confidence. I think we’re starting to want to be in that situation, so we can make a play and we can get the ball back.”

The decisive stop also sent the Chiefs (7-4) into their long-awaited bye on a high note.

They managed to weather a litany of injuries, most notably the dislocated kneecap to quarterback Patrick Mahomes, to remain in the postseason picture. And now they have a week off late in the season to rest up, get a few injured guys back and prepare for the stretch run.

“We have been kind of on the rise, and then last week not-so good,” Chiefs coach Andy Reid said. “So we’re back in. Last week we gave up too many big plays. So this week we came back and made a lot of big plays and hung in there and kept battling.”

The Chiefs struggled to generate turnovers earlier this season, but they picked off Rivers four times and forced three fumbles — the Chargers recovered all them. Along with the clinching interception, Mathieu intercepted a pass that resulted in a short field and ultimately a touchdown.

The Chiefs’ run game remains hit or miss. Mahomes led the way with 59 yards on five carries, and one of them was an important scramble for a first down in the fourth quarter. But their trio of running backs — LeSean McCoy, Damien Williams and Darrel Williams — combined to run 22 times for 71 yards.

Mahomes only threw for 182 yards with a touchdown and an interception, which are pedestrian numbers by his standards. But his recovering knee looked fine on the questionable turf in Azteca Stadium, and now he gets another week off to ensure the league MVP is ready for the final stretch.

The Chiefs’ defensive backfield may have intercepted four passes, but it also allowed Rivers to throw for 353 yards and a touchdown. Veteran CBs Morris Claiborne and Bashaud Breeland need to offer more on the outside to help Mathieu and rookie safety Juan Thornhill on the back end.

The biggest injury was to WR Tyreek Hill, who left with a hamstring strain. Damien Williams hurt his ribs, SS Jordan Lucas hurt his shoulder and McCoy went through concussion testing. None of the injuries appear to be serious enough to keep anybody out long term.

The Chiefs are off until facing the Raiders on Dec. 1. Then comes a trip to New England before a closing stretch against the Broncos, Bears and Chargers. Three of their final five are at home.