Chiefs expect to have Toney, McDuffie on field vs Titans 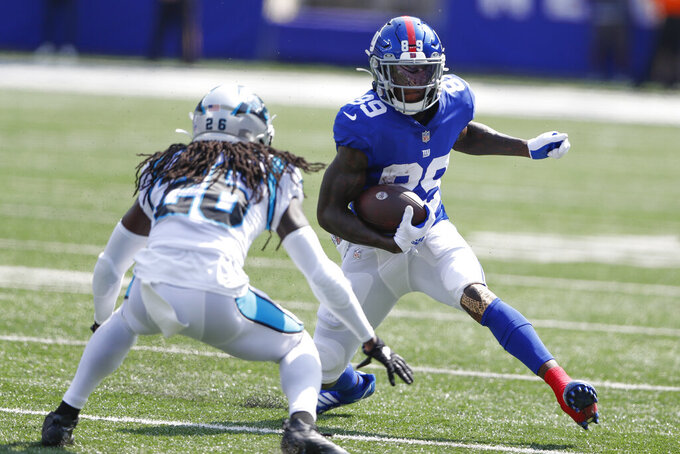 FILE - New York Giants' Kadarius Toney, right, runs with the ball during the first half an NFL football game against the Carolina Panthers, on Sept. 18, 2022, in East Rutherford, N.J. The Kansas City Chiefs acquired Giants wide receiver Kadarius Toney on Thursday, Oct. 27, 2022, for a pair of picks in next year's draft, a person familiar with the terms of the trade told The Associated Press. (AP Photo/Noah K. Murray, File)

KANSAS CITY, Mo. (AP) — The Kansas City Chiefs expect to have newly acquired wide receiver Kadarius Toney on the field Sunday night when they face the Tennessee Titans in what could become a pivotal game in the race for AFC playoff seeding.

They also plan to have first-round draft pick Trent McDuffie back at cornerback following his hamstring injury.

The Chiefs acquired Toney last week from the New York Giants for third- and sixth-round picks in next year's draft, hoping to upgrade a wide receiver room that has produced mixed results this season. They also wanted another wide receiver who will be under contract next season, when players such as JuJu Smith-Schuster and Mecole Hardman are free agents.

“Right now I haven't any expectations. I just want to come in and do what's asked of me,” Toney said Wednesday. “I've always been a smart player, but I feel like I'm grasping (the playbook) gradually, and whatever I pick up they give me more.”

Toney, who was drafted in the first round by the Giants last year, has struggled through injuries and appeared in just 12 of a possible 24 games. He hurt his right hamstring in training camp, tweaked the injury in Week 2 against Carolina, then he hurt his left hamstring earlier this month, which are a big reason he has two catches for no yards this season.

Toney professed himself healthy now, though, and the Chiefs (5-2) think his speed and elusiveness will fit seamlessly within an offense that was humming before his arrival. They're coming off a 44-23 rout of the 49ers before their bye week.

“It's about getting on the same page, at the end of the day,” Chiefs quarterback Patrick Mahomes said. “Our offense is a hard offense to learn. You don't want to overwhelm guys and get them in there where they can't function. But at the same time, you want to give them some chances. So we'll bring him in so he can go out there and be a factor for us on the field.”

The Chiefs were interested in Toney prior to the 2021 draft, but they didn't have a first-round pick and the Giants snapped him up 20th overall. And they tried to get Toney again this past offseason, when they signed Smith-Schuster and Marquez Valdes-Scantling in free agency in a bid to replace the production they traded away with Tyreek Hill.

General manager Brett Veach finally got him last Thursday, swinging the trade well before this week's deadline in the hopes that Toney could get up to speed during the Chiefs bye week in time to play against the Titans.

It helps that Giants offensive coordinator Mike Kafka was a longtime assistant in Kansas City.

“We'll try to work him in. He's a smart kid,” Chiefs coach Andy Reid said. “He's been with us a couple of days. We've had a chance to talk to him. He picks things up fairly easy. He was with Kafka, too, so a little bit of the plays, the terminology — a little bit is familiar with him. He has a foundation.”

Meanwhile, the Chiefs anticipate having McDuffie on the field for the first time since the season opener at Arizona. He's been eligible to come back the past two games, but the Chiefs decided to play it safe and wait until after the bye.

They traded cornerback Rashad Fenton to the Falcons for a conditional pick on Tuesday to create roster space for him.

“We try to keep open communication with these guys, see what they're feeling,” Reid said. “Their coaches know them; see what their coach sees, talk with the players, see how he feels, and obviously the medical staff and trainers. And when it was all said and done, we said,' You know what? He needs a little more time.' But we know he wants to play.”

McDuffie will finally get that opportunity again Sunday night against the Titans.

NOTES: TE Jody Fortson (bruised quad) did not practice Wednesday. ... RT Lucas Niang (knee surgery) began practicing after spending the first eight weeks on the PUP list. That begins a 21-day window in which Kansas City must active him or place him on season-ending injured reserve. ... DE Frank Clark began serving his two-game suspension this week for violating the NFL's personal conduct policy. “He'll do the right things,” Reid said. “He's a good player. You miss that. But it gives other players an opportunity to step up.”