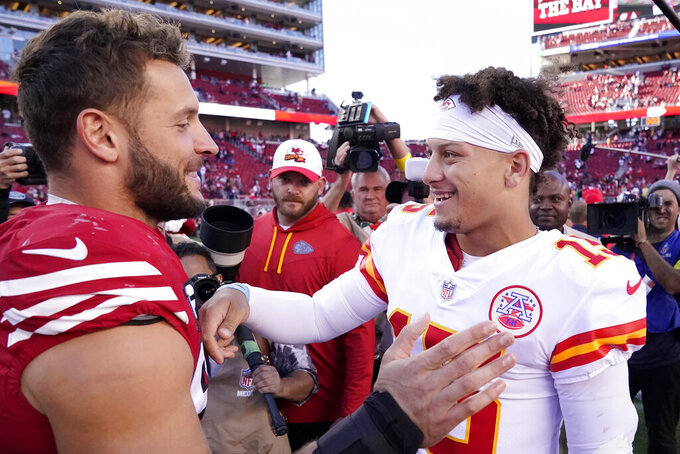 KANSAS CITY, Mo. (AP) — The timing of the Kansas City Chiefs' bye this week couldn't have come at a better time for Patrick Mahomes. And not just because the bumps and bruises from the first seven games of the NFL season will have a chance to heal.

There's the Kansas City Current, the women's professional soccer team owned in party by his wife Brittany, who will be playing the Portland Thorns for the NWSL championship on Saturday in Washington, D.C. And the Kansas City Royals, the Major League Baseball club in which he owns an interest, who are closing in on hiring a new manager.

Oh, and then there's “Call of Duty” with his buds.

It was playing that game with JuJu Smith-Schuster, Travis Kelce and Marquez Valdes-Scantling a week ago that Mahomes credited with improved communication in last week's win over San Francisco.

For the first time all season, Mahomes looked to be on the same page with his new wide receivers along with his venerable tight end, and the result was an offensive explosion against one of the NFL's best defenses. The 44-23 victory sent Kansas City into its week off 5-2 and atop the AFC West, rather than 4-3 and tied for the lead with the Chargers.

“I don’t play all the time,” Mahomes explained afterward. "I had a free night on Friday, so I told them, 'I’ll get on with y’all for a little while.’ It was me, Travis, Marquez and JuJu. Marquez and JuJu are really good. Me and Travis are just all right. We did our part and we went three-for-three with three wins in Warzone, which I don’t do often.

“So,” Mahomes said in a segue to facing the 49ers, "I felt pretty good about it going into the game.”

In truth, Mahomes should be feeling good about the way the first half of the season has gone.

The big question mark surrounding the Chiefs had to do with replacing Tyreek Hill, the speedy security blanket for Mahomes the past several years. But his numbers through the first seven games have been as good as ever: He leads the NFL in touchdown passes (20), yards passing (2,159) and passer rating (109.5) among true quarterbacks, all while facing three of the top 10 scoring defenses in the NFL over that time period.

Against the 49ers, when Mahomes threw for 423 yards and three scores, Valdes-Scantling caught three balls for 111 yards and Smith-Schuster caught seven for 124 and a score. It was the first time Mahomes had two players with at least 100 yards receiving in a game in which neither player was Kelce or Hill.

“And,” Miller said, "he's influenced his teammates to play at a higher level than they normally would.”

Speaking of Hall of Fame, the win over the 49ers was the 55th in Mahomes' first 70 starts, tying Hall of Famer Ken Stabler for the second most at that stage in an NFL career. Only Otto Graham, another member of the Hall of Fame, has started off better with 56 wins since the NFL began tracking such numbers in 1950.

He just passed Trent Green for the second most passes completed in a career with 1,726, and he needs 360 yards to pass Green (21,549) for second in yards passing. At his current rate, he could top Hall of Famer Len Dawson (28,507) for No. 1 at some point next season, along with breaking Lenny the Cool's record for TD passes (237).

“He’s too crazy fun,” said another Hall of Fame quarterback, Joe Montana. “He does everything you tell every quarterback you can’t do or don’t do. He does all of it and does it well. You don’t throw off your back foot, don’t go this way, don’t throw sidearm, don’t throw late down the middle. He is one of the most talented guys that you’ll see in that position.”

The result are plays that few other quarterbacks in the NFL can make.

“Some guys just have that innate ability to look down field and try to make a play,” Chiefs offensive coordinator Eric Bieniemy said. “He has that pilot vision eyes where he can see the entire field. Some guys don’t have that where they can basically see a flag being thrown from their left and also understand, ‘I have receivers potentially open down field,’ because the defensive slacked off. So, we’re encouraging that. We want him to try (to) make a play whenever possible.”

He won't have to make any plays this week, though. Mahomes will be busy watching the Current play for a title and perhaps fielding a phone call or two from Royals general manager J.J. Picollo, who'll be wrapping up their managerial search.

Even so, football probably won't be far from Mahomes' mind.