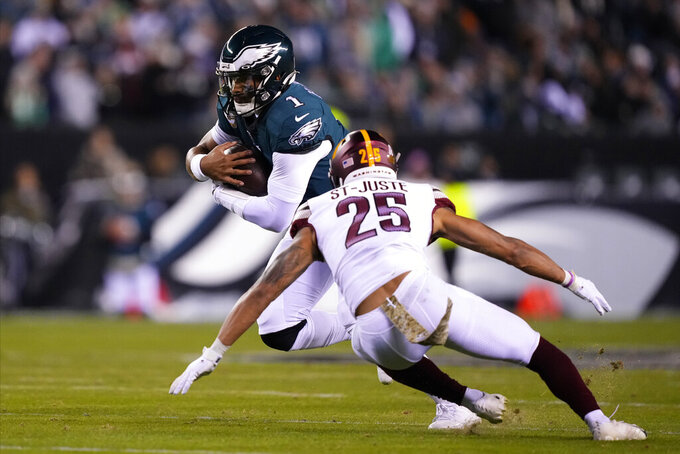 PHILADELPHIA (AP) — Brandon Graham took a knee at midfield as most of his Eagles teammates trudged off the field in stunned disbelief that their undefeated season had been wiped out.

An Eagles team that romped toward the first 8-0 start in franchise history played with uncharacteristic sloppiness, failed to hit on the game-breaking plays that had defined their season, and had every flaw exposed in quite an imperfect performance.

The Washington Commanders turned methodical drives into scores and took advantage of turnover-prone Philadelphia, stunning the Eagles 32-21 on Monday night and sending them to their first loss in nine games this season.

Behind Jalen Hurts, the Eagles were the last team in the NFL that could make a run at Miami’s 17-0 mark in 1972 and the lone perfect season. The 2007 New England Patriots came close, going 18-0 before a Super Bowl loss.

“We started 8-0 together, we lost this game together, we're going to move on together,” Eagles coach Nick Sirianni said.

The Eagles had their shot at perfection slip out of their hands.

Trailing at halftime for the first time this season, Hurts seemed to have one more big play left to pull out a victory. He connected on a deep ball to wide receiver Quez Watkins on a 51-yard reception late in the fourth quarter trailing 26-21. Watkins hit the ground, popped up and took off running, only to fumble the ball and give Washington possession.

“I was just trying to make a play. I know I didn’t get touched and I knew I had left him behind, so I just wanted to get up and get some extra yards,” Watkins said.

That was it for the Eagles and their four turnovers, a bloated number for a team that had only three in the first eight games.

“Flush it and move on,” Graham said.

The defensive end was flagged for a late unnecessary roughness call on QB Taylor Heinicke that extended Washington's drive.

“I was just trying to touch him down, because it just looked like he was going to get up. You just never know. But that’s on me. I own that one. That’s on me," Graham said

NFL referee Alex Kemp told a pool reporter Graham was penalized because Heinicke “had clearly given himself up.”

“Therefore, he is down and a defenseless player. The contact by Philadelphia No. 55 was not only late, but also to the head and neck area,” Kemp said.

Graham wasn't alone in making miscues that cost the Birds.

A.J Brown had a catch knock off his hands and turn into an interception. And, Dallas Goedert fumbled in the fourth quarter when linebacker Jamin Davis grabbed the tight end by the facemask — but no penalty was called.

Kemp told a pool reporter, “We didn’t see a face mask on the field."

Heinicke again started for injured QB Carson Wentz, the much-maligned former Eagles QB who did play a key role in helping them win a Super Bowl in the 2017 season. He wasn’t flashy, but efficient, going 17 for 29 and throwing 211 yards. Terry McLaurin had 128 yards receiving -- including a 41-yard haul that led to a field goal. Joey Slye kicked four field goals.

The Eagles were favored by 10 1/2 points, according to FanDuel Sportsbook, and the Commanders reveled in pulling off the upset.

“We had a marvelous time ruining everything,” the Commanders tweeted.

The Eagles tried to make the Commanders seem like just another bump in their bid for perfection, with the kind of early good fortune that they have enjoyed this season.

Take, for example, a roughing-the-kicker penalty that gave Washington a first down, and new life, on the game’s opening drive. Eagles defensive end Josh Sweat simply strip-sacked Heinicke on the next play and the Eagles recovered. Hurts rushed up the middle for a 1-yard TD and a 7-0 lead.

The Commanders then flashed their first clock-killing drive with a 16-play effort that chewed up more than seven minutes and ended with Antonio Gibson’s 1-yard rushing TD.

Hurts hit the highlight-reel with an ode to former Florida star Tim Tebow with a jump pass to Goedert for a 6-yard score, and the QB struck the Heisman pose in celebration.

The points off takeaways and Hurts scoring with his arms and legs had been the key ingredients in the team's flawless start, and the Eagles certainly seemed poised to make it an easy night against a team they routed 24-8 in September.

The Commanders showed a rare offensive spark of late and, after scoring 17 points in each of their last two games, took a 20-14 lead into halftime. Syle kicked field goals of 44 and 58 yards and Brian Robinson added a 1-yard rushing score.

Washington converted 9 of 12 third downs in the half -- it entered 26th in the NFL in third-down efficiency -- and crushed the Eagles in time of possession 23:49 to 6:11 -- the 17:38 TOP disparity was their best in a first half in franchise history.

Slye kicked 32 and 55 yard field goals in the second half.

The Eagles trailed at halftime for the first time since last season’s postseason loss at Tampa Bay, and Hurts could not rally them in their first true case of adversity.

Hurts, who didn’t help his MVP bid, connected with wideout DeVonta Smith for an 11-yard score early in the fourth that pulled the Eagles within 23-21.