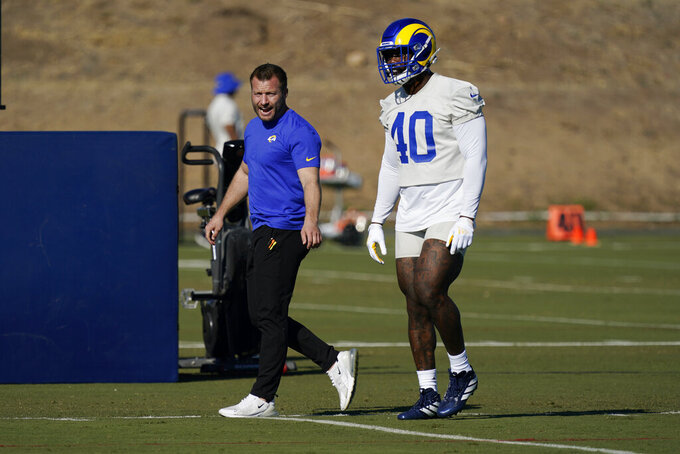 ENGLEWOOD, Colo. (AP) — Jonathon Cooper was just as shocked as anyone to learn — through social media — of the Von Miller trade.

Shock has now given way to this reality for the Denver Broncos rookie linebacker — he's stepping in for the team's all-time sacks leader. Good thing for all those pointers before Miller was dealt to the Los Angeles Rams. Cooper plans to put them to good use.

“Every time Von spoke to me, my ears perked up like a little kid,” said Cooper, a seventh-round pick out of Ohio State who's expected to start for Denver (4-4) on Sunday at Dallas (6-1). “Everything that he had to say, I was listening. I tried to take everything that he said and see how I can apply it to myself, even from the small things, day-to-day conversations, to big things like when it comes to being on the field.”

Cooper doesn't take anything for granted. Not after what he's been through. He discovered he had an irregular heartbeat as a high school freshman and had two cardiac ablations before finishing his football and basketball careers at Lincoln High in Gahanna, Ohio, a suburb of Columbus.

His stock slipped after an EKG raised red flags leading into the NFL draft. He missed the offseason program as doctors performed three heart procedures. Since his return, he's proven to be a quick learner.

Cooper has played in eight games this season and is searching for his first NFL sack. He had three QB hits at Cleveland.

“I can’t keep telling myself like, ‘Oh, I’m a rookie.' Or, ‘Oh, this is my first year. Let me get my feet under me,’” said Cooper, a two-year captain while with the Buckeyes. “I’ve played a couple of games and I’ve shown that I can go out there and play well. Now, I just feel like I need to take the next step and keep learning from guys like Malik (Reed) and (Bradley) Chubb, and really just see what I can do to take my game to the next level.”

Broncos defensive coordinator Ed Donatell was asked about the ceiling for a player such as Cooper. Donatell really didn't have a response, only that, “he's so tough and he works so hard. You put that combination together, and he could be pretty darn good.”

The Broncos are thin on the defensive front with Chubb (ankle) sidelined and Mike Purcell dealing with a thumb injury. Reed aggravated a hip this week and is questionable for Sunday. The Broncos do have rookie linebacker Baron Browning, along with recently acquired linebackers Stephen Weatherly and Kenny Young.

For an assist with that, he credits Miller, who remains just a phone call away for advice.

“If I reach out to him, he’ll reach back,” said Cooper, who started last weekend in a win over Washington when Miller was sidelined by an ankle injury. "Some of the conversations that we had were pretty deep, and I can’t thank him enough for all the things that he’s talked to me about, and all the things that he’s taught me. Even though our time was short, I enjoyed every moment of it.”

One tip from veteran safety Kareem Jackson: Just be himself.

“He’s here for a reason,” Jackson said. “He’s a great young player, and he plays with a lot of energy. I’ll just try to help him in different situations and try to point him in the right direction. We have a great group of guys up there with him on the front, so if he can watch those guys and learn from those guys, he’ll be just fine.”

NOTES: LT Garett Bolles has been ruled out Sunday with an ankle injury. Calvin Anderson will start in his place. “I know that position is sacred to him,” Anderson said. “I want to honor him by playing it well.” ... DB Nate Hairston could see time at the nickel spot, coach Vic Fangio said.