Defense figures to be focus as Cowboys miss playoffs again 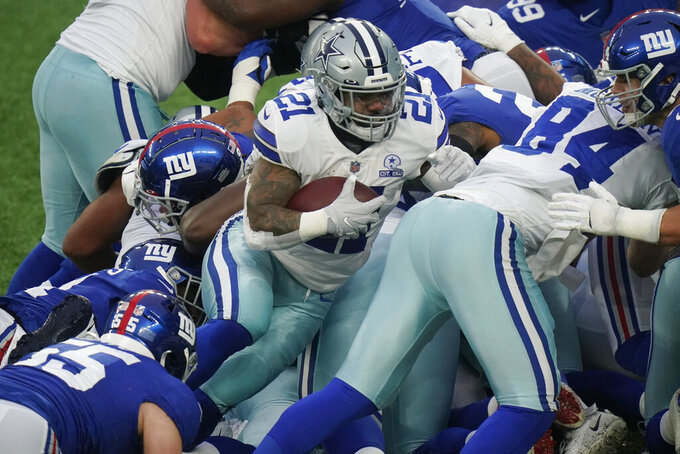 The answers on offense for the Dallas Cowboys going into coach Mike McCarthy's second season are in place, simply waiting to return from injury, most notably quarterback Dak Prescott.

The future of defensive coordinator Mike Nolan is the starting point after the Cowboys gave up a franchise-record 473 points (just shy of 30 per game) and finished 31st in the NFL in run defense, allowing 159 yards per game.

McCarthy didn't exactly endorse his most important hire after a 23-19 loss to the New York Giants eliminated Dallas (6-10) from the playoffs a few hours before Washington made that defeat moot by beating Philadelphia 20-14 to win the NFC East.

When they hired McCarthy, the Cowboys had the same Super Bowl aspirations that cost Jason Garrett his job when Dallas missed the playoffs in 2019. Although injuries were a factor, the Cowboys have now missed the postseason in consecutive years for the first time since losing three straight win-and-you're-in finales in Garrett's first three full seasons, from 2011-13. Dallas kept its slim hopes alive with three straight wins after falling to 3-9.

“Everything we faced this year seems like not really anything went our way, but somehow, we kept grinding,” running back Ezekiel Elliott said. “We kept going and we kept fighting. And I am proud of this group of men for that.”

Prescott's season-ending ankle injury in Week 5 was the biggest blow for an offense that also lost tight end Blake Jarwin in the opener and got just two games from seven-time Pro Bowl left tackle Tyron Smith because of a neck issue.

Right tackle La'el Collins didn't play at all before season-ending hip surgery, and four-time All-Pro right guard Zack Martin missed the last five games with a calf injury sustained after he had moved to right tackle to bolster the injury-plagued line.

With all those players rejoining the promising receiving trio of Amari Cooper, Michael Gallup and CeeDee Lamb — and with play caller Kellen Moore returning on a three-year contract — the offense is rolling compared to a defense that improved after a poor start but still faces many questions.

The core of defensive end DeMarcus Lawrence and linebackers Leighton Vander Esch and Jaylon Smith isn't likely to change, with Vander Esch needing to prove he can stay healthy after again struggling with injuries. Beyond promising rookie Trevon Diggs, the secondary could be looking at an overhaul — with or without Nolan in charge.

“We got to pop it off sooner — can’t wait till the end of the season,” Smith said. “We grew a lot. But we’re not satisfied because we’re not where we want to be.”

It's time for another offseason of talk about Prescott's contract after he played on the franchise tag and could do it again. The sides have until March 9 before Dallas has to tag him again, then until July to get a deal done.

This will be the third offseason of trying to get a long-term contract. It's been seven years since the Cowboys signed a quarterback to a nine-figure deal. That contract with Tony Romo came three years before Prescott took his job with a spectacular rookie season.

After nine seasons as the starter in Cincinnati, Dalton signed a one-year deal as Prescott's backup and ended up starting nine games, officially going 4-4 to bring his career record to 74-65-2.

Dalton said when he signed he considered himself a starter, and the 33-year-old's tune didn't change after the season. He played close to home with the Cowboys, who remain Prescott's team.

The worst year of the 2016 All-Pro's career was cemented with a 42-yard showing against the Giants, putting Elliott at 979 yards rushing for the season when he didn't finish with fewer than 1,357 yards in the previous three seasons he played at least 15 games.

The 25-year-old is just now getting into the $90 million, six-year extension that ended his preseason-long holdout in 2019, but the Cowboys can walk away with minimal damage under the salary cap in three years, two with a slightly bigger hit.

Besides Nolan, the Cowboys have some personnel decisions with pending free agents. Defensive lineman Tyrone Crawford and linebacker Sean Lee, with 20 seasons combined while spending their entire careers with the Cowboys, may not be back.

Defensive end Aldon Smith, who started fast but faded a bit after almost five years out of the game, is a free agent again. So are cornerbacks Chidobe Awuzie and Jourdan Lewis and safety Xavier Woods.