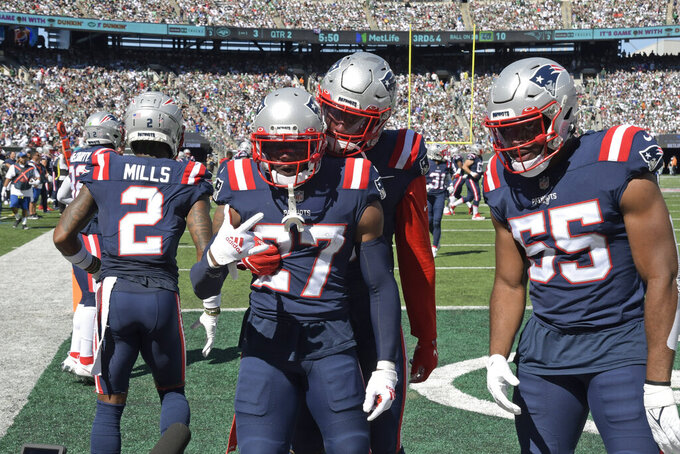 FOXBOROUGH, Mass. (AP) — The New England Patriots struggled on both sides of the ball in their season-opening loss to Miami.

Led by their defense, they took a big step toward finding some consistency in Week 2 against the Jets.

The Patriots intercepted rookie Zach Wilson four times in Sunday’s 25-6 win at New York, their most in a game since 2019. It helped New England extend its streak without a 0-2 start to an NFL-best 20 consecutive seasons.

It’s a great sign for the Patriots as their offense continues to progress behind rookie Mac Jones.

A lot of the opportunities the secondary had came as a result of pressure by the defensive line. Wilson was sacked four times and hit another seven.

It's a positive sign for New England, which shared the league lead for interceptions last season with 18.

The Patriots have a plus-three turnover margin through two games and through Sunday’s games were tied for second in the NFL, allowing 11.5 points per game.

They may need that cushion after Jones took some steps backward in his second NFL start.

“I can push the ball down the field more,” Jones said. “(The Jets) obviously have a good defensive line ... and I can definitely just hold the ball in a good way, and maybe just move and try to make a better throw down the field on a lot of plays.”

A week after his costly fumble in the fourth quarter helped cement the Patriots’ loss to the Dolphins, running back Damien Harris responded with a team-high 62 yards rushing and a touchdown against the Jets.

His score came via a 26-yard run in the third quarter in which he appeared to elude seven different tackle attempts.

“Everybody was blocking their butts off,” Harris said. “I got a lot of help from a lot of guys. Apparently, I got some help from Mac Jones, too. I’ll have to watch the film to see that. It was a great play. It was just great to have that moment with the team.”

Right tackle Trent Brown was sidelined by a calf injury after he got hurt in the season opener. His status for this week is uncertain, but coach Bill Belichick said he’s comfortable with the team’s depth at the position.

Yasir Durant (31 snaps) and Justin Herron (30 snaps) shared the spot against the Jets, though Durant allowed all three Jets sacks.

“I think we’re all right here,” Belichick said. “We planned to play Justin and Yasir both, and we did, and they both got some good experience, and they both had a lot of good plays. So, we’ll see where we are this week and go from there.”

Linebacker Josh Uche had his first career NFL game with multiple sacks, getting to Wilson twice. He leads the team with three sacks on the season.

The Patriots’ offense continues to struggle in the red zone. It was just 1 for 3 on Sunday after going 1 for 4 in Week 1. That success rate of 28.6% ranks 31st in the NFL.

19 — The number of interceptions for Jackson since 2018, tied with Xavien Howard for the most in the NFL over that time period.

The Patriots return home to host New Orleans on Sunday. It's their final tune-up before their highly anticipated matchup with Tom Brady and the Tampa Bay Buccaneers.