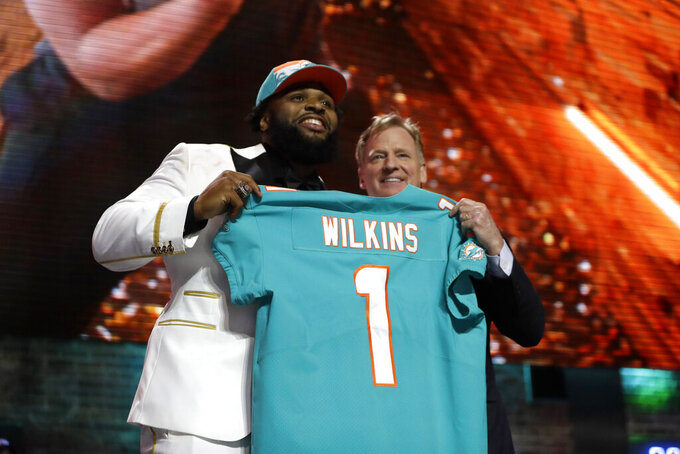 Wilkins gleefully leaped into the commissioner on the draft stage in Nashville, Tennessee. The Dolphins hope it was the first of many NFL celebrations by Wilkins, a 315-pound lineman from Clemson with an outsize personality to match.

"Very charismatic," Miami general manager Chris Grier said with a chuckle. "He told us it was the best decision we ever made when we picked him."

A rebuilding project has left the Dolphins perceived as the league's lightweights, and to help change that, they used the 13th overall pick on the bulky Wilkins.

The Dolphins went 7-9 in 2018, and after shedding numerous veterans from the roster this offseason, they're widely expected to be worse this year under new coach Brian Flores. Their odds for winning the Super Bowl are 250 to 1, longest in the NFL.

Even so, Wilkins was thrilled to be Miami-bound, as Goodell could attest after being targeted with a flying shoulder bump.

"He wasn't too upset about it," Wilkins said with a laugh. "He wished me good luck. I'm surprised he didn't hit back or anything. I did get him kind of hard. My shoulder is actually hurting a little bit from how hard I bumped him, but I was just so excited."

Miami passed on Ohio State quarterback Dwayne Haskins, and instead attempted to shore up a defense that last year allowed 6,257 yards, most in franchise history.

The draft was deep in defensive linemen, and some projected Wilkins as a top-10 pick. Last year the first-team All-American had 15 tackles for a loss and six sacks.

The Dolphins had an extensive scouting report on Wilkins because their new defensive line coach, Marion Hobby, was his position coach at Clemson.

"A very smart, versatile player," Grier said. "Highly productive. I love the size, the athletic ability. For us it was an easy decision."

Wilkins helped the Tigers win two national titles, and became their first scholarship player to earn a degree in 2 1/2 years. He's optimistic he can excel with the Dolphins.

"I know about the history — guys like Dan Marino and Jason Taylor who put on that uniform," he said. "I want to work hard so I can get to the point where I can be considered great like those guys."

While Wilkins was in a celebratory mood, he turned reflective when asked about his grandfather, killed in 2011 when a SWAT team rifle accidentally discharged during a raid.

"My grandfather meant everything to me," Wilkins said. "He was the most influential person in my life."

In opting for a lineman, Miami has still used a first-round pick on a quarterback only once since 1983. Well-traveled veteran Ryan Fitzpatrick signed with the Dolphins in March, and they've acknowledged he's merely a caretaker, but the draft wasn't deep at the position.

The Dolphins might pursue Arizona quarterback Josh Rosen, who is on the trade market after the Cardinals used the No. 1 overall pick to take quarterback Kyler Murray of Oklahoma. Arizona took Rosen with the 10th overall pick last year, and the former UCLA star had a rocky rookie season.

With a multitude of needs still to be addressed, the Dolphins have one pick in the second round and another in the third round Friday. They'll be in the market for an edge rusher and right tackle, among other positions.

"Where we are, we've got to build the roster up and create depth and competition everywhere," Grier said.