Dolphins give Rosen another chance to be franchise QB 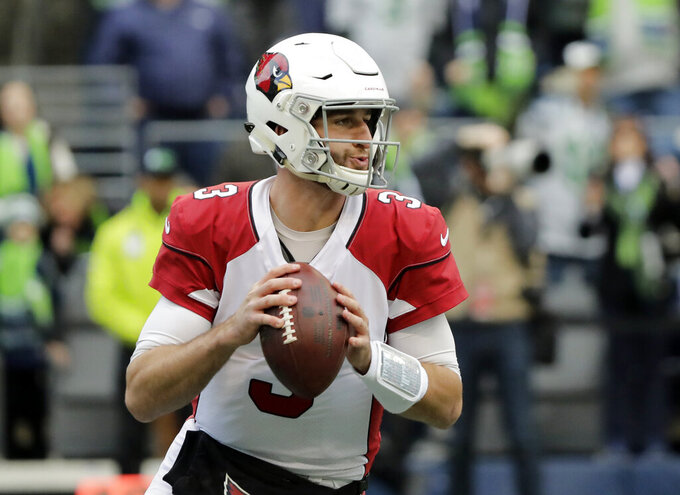 FILE - In this Dec. 30, 2018, file photo, Arizona Cardinals quarterback Josh Rosen drops back to pass against the Seattle Seahawks during the first half of an NFL football game in Seattle. Rosen, supplanted by Kyler Murray as the Cardinals’ quarterback of the future after only one season, has been traded to the Miami Dolphins in a deal that also involved two draft picks. (AP Photo/Ted S. Warren, File)

DAVIE, Fla. (AP) — Going into the draft, the Miami Dolphins' plan was to win later.

Josh Rosen will try to change that.

If the Arizona Cardinals' castoff quarterback shows the Dolphins this year that he can be a franchise QB, they'll be ahead of schedule in their rebuilding project under first-year coach Brian Flores.

And if Rosen is a bust for the second time in as many NFL seasons, the Dolphins will likely have a lousy 2019 record, which means they'll be well-positioned to draft their quarterback of the future a year from now.

The Dolphins traded a 2019 second-round draft pick and a 2020 fifth-round selection to Arizona for Rosen, a modest investment considering the potential payoff. Rosen was the No. 10 overall pick last year and had a rough rookie season for a team that went 3-13.

He'll likely beat out veteran newcomer Ryan Fitzpatrick for the Dolphins' starting job this year, in part because they need to find out whether he's a keeper.

Here are things to know about other moves by the Dolphins during the draft:

The Dolphins landed two players likely to start as rookies — Clemson defensive tackle Christian Wilkins in the first round, and versatile Wisconsin offensive lineman Michael Deiter in the third round. Their third-day picks were Wisconsin linebacker Andrew Van Ginkel in the fifth round, Ohio State right tackle Isaiah Prince in the sixth round, and Auburn fullback Chandler Cox and Washington running back Myles Gaskin in the seventh round.

"We've made some progress," general manager Chris Grier said. "We feel better, but there's still work to do. We're not where we want to be, but we're happy where we are."

The Dolphins weren't expected to use a high pick on a quarterback, because the crop of prospects in 2020 is more promising.

The Dolphins began the draft in the market for an edge rusher, and they're still shopping for one. There's a significant need at the position because the Dolphins parted with three veteran defensive ends this offseason, including five-time Pro Bowl end Cameron Wake, while adding no marquee free agents.

They're also in the market for help at right tackle and cornerback, and depth is thin at most positions.

The Dolphins may plug some holes in post-draft free agency, but some long-term solutions will have to wait until 2020. That's when Grier and Flores are expected to make a big splash, with a favorable salary cap situation next year and 10 picks in the draft, not including two possible compensatory choices.

They could have seven picks in the first four rounds.

"The plan was to get as many picks as we could going forward, to build this thing right," Grier said. "We'll see where it goes."