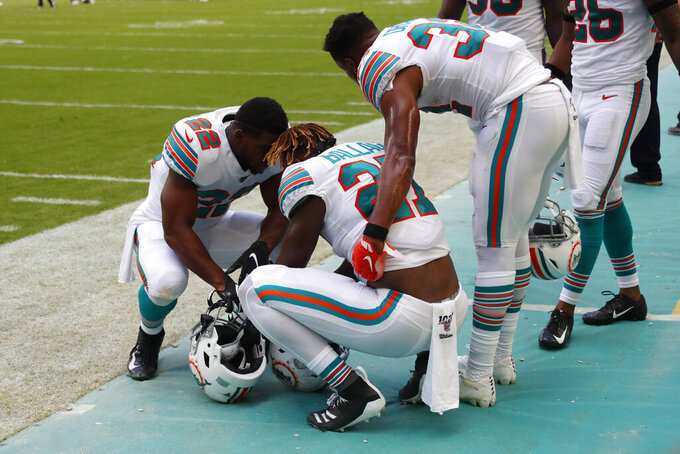 DAVIE, Fla. (AP) — Miami Dolphins general manager Chris Grier says this year's roster dismantling has been more drastic than he expected, but a turnaround can come quickly because the team will be aggressive in free agency in 2020.

In the wake of the deal that sent disgruntled defensive back Minkah Fitzpatrick to the Pittsburgh Steelers, no remaining player has asked to be traded, Grier said Tuesday. He said players and team officials are unified in their belief in the Dolphins' rebuilding project, even though they have been outscored 102-10 in the first two games.

Team officials tried unsuccessfully to talk Fitzpatrick out of his desire to play elsewhere, Grier said, and the 2018 first-round pick was traded late Monday for a first-round pick in 2020. The Dolphins and Steelers also swapped lower picks.

The Dolphins now have three first-round choices next year, and are projected to have more than $110 million in salary cap space.

"Whether it's free agency or the draft, we've positioned ourselves where we think we can do anything and get whatever player we feel will help us," Grier said. "We'll be aggressive in free agency. We're not going to sit back and not do anything. We're going to be very proactive and try and get this turned quickly."

The roster purge included trading left tackle Laremy Tunsil and receiver Kenny Stills to the Houston Texans for two first-round picks and one second-rounder. Grier said that while the Dolphins hadn't planned to trade Tunsil, the Texans offered an "historic haul" that was too good to turn down.

"I called Laremy about the trade, and Laremy walked in my office and saw it on the board and said, 'I would trade me for that,'" Grier said. "We were not trying to do it."

Regarding Fitzpatrick, coach Brian Flores, owner Stephen Ross and Grier had multiple conversations with him urging him to stay in Miami, Grier said.

"We tried to make it work," Grier said, "saying we wanted him here and viewed him as a core piece. The kid just felt it was time for him to move."

Grier said he, Flores and Ross are in agreement about the team's directions and moves made. And Grier said that while the roster has been depleted, the team has a core to build around that includes Pro Bowl cornerback Xavien Howard and receiver Jakeem Grant, both of whom recently signed contract extensions.

Meanwhile, short-term pain may be unavoidable. No team since 1961 had a worse point differential after two games.

"We know that as the team was built right now," Grier said, "it wasn't going to win a Super Bowl."