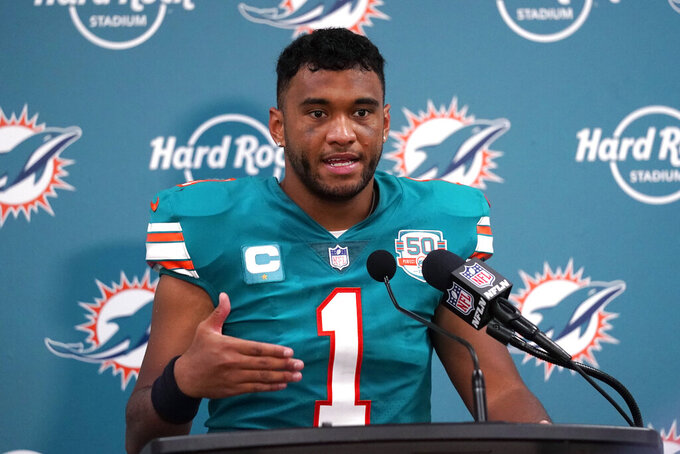 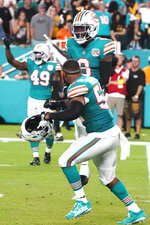 OPENING LINE: Dolphins by 3 1/2, according to FanDuel Sportsbook.

TURNOVER DIFFERENTIAL: Dolphins minus-2; Lions minus-6.

DOLPHINS PLAYER TO WATCH: WR Jaylen Waddle. The second-year receiver has proven his big-play ability as one of the centerpieces of Miami’s offense. Waddle had three receptions for 63 yards in the first quarter last week against Pittsburgh. His 621 receiving yards are the fourth most in the NFL, and he is the only player in the league with at least 600 receiving yards on fewer than 40 catches.

LIONS PLAYER TO WATCH: QB Jared Goff. For the first four weeks of the season, Goff looked like the quarterback who took the Los Angeles Rams to a Super Bowl, throwing 11 touchdown passes and only turning the ball over three times. In the past two games, he’s turned the ball over six times while leading the Lions to six points. He must be better against Miami's secondary.

KEY MATCHUP: Miami’s running game against Detroit’s defense. The Dolphins need to find ways to move the ball on the ground to take some pressure off Tua Tagovailoa — they’ve only scored four rushing touchdowns and are 29th in the league at 85.4 yards per game. If it is going to happen, it should be this week against a Lions run defense that has allowed 977 yards and 12 touchdowns in six games.

KEY INJURIES: Dolphins: S Brandon Jones, who was placed on injured reserve this Tuesday, will miss the rest of the season with an ACL injury. ... CBs Keion Crossen (knee) and Kader Kohou (oblique) could return after sitting out last week. Lions: WR Amon-Ra St. Brown (ankle/head) and RB D’Andre Swift (ankle/shoulder) could play on Sunday. Swift, who is averaging 102.7 yards from scrimmage at 8.8 yards per touch, has missed the past three games, while St. Brown averaged 107 yards in the first three games before only playing 32 of 199 offensive snaps in the next three.

SERIES NOTES: There’s not much history — the Dolphins joined the NFL in the 1970 merger with the AFL, but only played the Lions three times in their first 21 seasons. Miami won seven of the first nine meetings, including the infamous “Piano Man” game on Thanksgiving Day in 2006. The Ford Field DJ mocked former Lions quarterback Joey Harrington’s musical ability by playing the Billy Joel hit during pregame warmups, only to see Harrington throw for three touchdowns in a 27-10 win. Detroit’s only touchdown was a 2-yard pass from Jon Kitna to current head coach Dan Campbell. The Lions have won the past three games, though, including a 32-21 win that improved Matt Patricia’s record to 3-3 in his first year as Lions coach. That was the last time he would see .500 — he won 10 of the next 37 games before being fired in 2020.

STATS AND STUFF: The Dolphins and Lions rank fifth and sixth respectively in yards per play at 6.1. ... The Lions have three players with a 50-yard rush this season — Swift, St. Brown and Jamaal Williams, but only one with a 50-yard reception — TE T.J. Hockenson. ... If the Dolphins win and improve to 5-3, it would tie the 2014 and 2020 seasons for the best eight-game start in the past 10 years. ... Miami is the only team in the league with two of the top 10 receivers as Tyreek Hill (57 receptions, 773 yards) and Waddle (34 receptions, 621 yards) are first and fourth, respectively, in receiving yards.

FANTASY TIP: Hill, Waddle and Tagovailoa are obvious choices, but the Lions defense has been better in the past two weeks. The Dolphins secondary, though, is struggling and St. Brown should get plenty of targets.