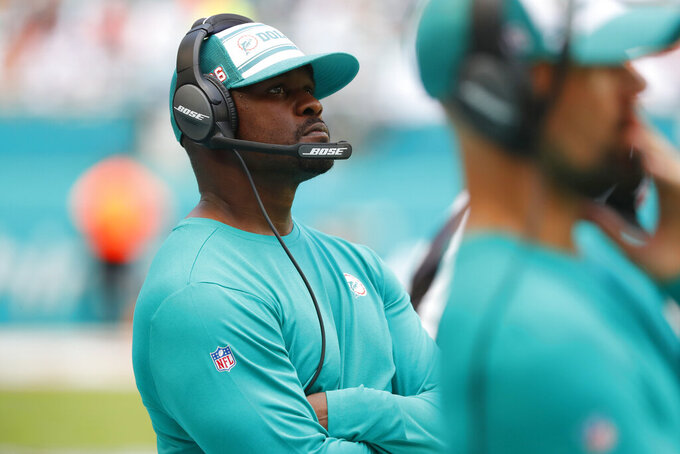 Miami Dolphins head coach Brian Flores looks up at the scoreboard, during the first half at an NFL football game against the New England Patriots, Sunday, Sept. 15, 2019, in Miami Gardens, Fla. (AP Photo/Wilfredo Lee)

MIAMI (AP) — The Miami Dolphins had forced a punt for once, and Jakeem Grant was about to field the kick when teammate Johnson Bademosi ran into him and sent him sprawling, so the ball was downed at the 8-yard line.

This team literally cannot get out of its own way.

Here are things to know about the team that's winning the race to the bottom in 2019:

Miami's defense was better in Sunday's 43-0 loss to New England, if only because the bar was set so low in the season-opening 59-10 loss to Baltimore.

The Dolphins gave up 16 points on the Patriots' first nine drives before the defense collapsed from the toll of carrying Miami's punchless offense on a hot day.

"We played together, we communicated, we played hard," linebacker Jerome Baker said. "That's the little light that we had. Ultimately we didn't get the job done."

The defense lost a starter Monday night when the Dolphins traded disgruntled defensive back Minkah Fitzpatrick to the Pittsburgh Steelers for a first-round draft pick in 2020.

The Dolphins were shut out at home for the first time since 2010 and netted 38 yards in the first three quarters. An awful offensive line might make it impossible to quarterback the Dolphins, but rookie coach Brian Flores is weighing whether to switch from Ryan Fitzpatrick to Josh Rosen as the starter Sunday at Dallas.

"After a couple of weeks like that, we're evaluating all positions," Flores said. "We haven't made any final decisions yet. Right now, it's Fitz."

Fitzpatrick's passer rating after two games is 39.9. Rosen played in the fourth quarter Sunday and went 7 for 18 for 97 yards with an interception and two dropped throws.

Baker (12 tackles) and cornerback Xavien Howard were excellent, and tackle John Jenkins had the best push of the season on a sack of Tom Brady.

Fitzpatrick passed for only 89 yards and threw two pick-sixes in less than two minutes. The second one came on a pass that deflected off the hands of running back Kalen Ballage, who had another drop earlier. Aside from his embarrassing collision with Bademosi, Grant dropped a long pass, as did DeVante Parker and Preston Williams. Left tackle Jesse Davis and cornerback Eric Rowe also struggled.

Meanwhile, Flores' head coaching career is off to a start like no other.

"We make the corrections and we move on," he said. "We don't point fingers. We don't make excuses. There's a room full of guys who aren't doing that. That's how you do it. We'll try to turn things around as quickly as possible."

Receiver Albert Wilson (hip/calf) and safety Reshad Jones (ankle) were inactive, and their status for the game against the Cowboys is uncertain.

As the Dolphins moved one week closer to the 2020 draft, Alabama's Tua Tagovailoa threw for a career-best 444 yards in a 47-23 victory over South Carolina.

Flores must sort out a shaky secondary scrambled by the loss of Minkah Fitzpatrick. Meanwhile, the coach can count the days until the 2020 draft, when Miami now has three first-round picks.