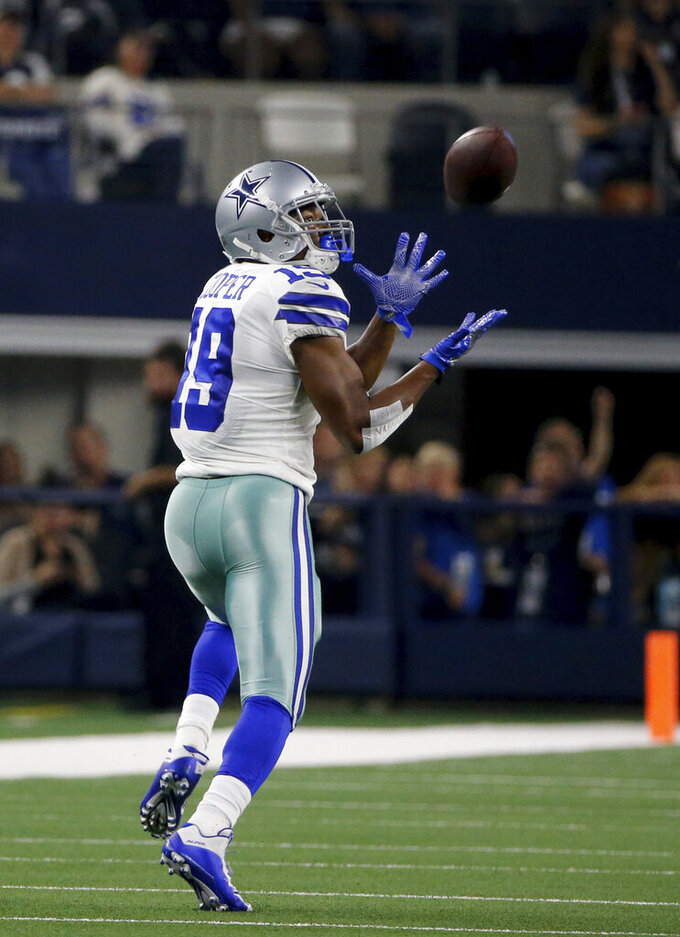 Dallas Cowboys wide receiver Amari Cooper (19) reaches up to catch a pass for a long gain agains the Philadelphia Eagles in the first half of an NFL football game in Arlington, Texas, Sunday, Oct. 20, 2019. (AP Photo/Michael Ainsworth)

ARLINGTON, Texas (AP) — Receiver Tavon Austin scooted 20 yards for a touchdown on an option pitch from Dak Prescott, who had an 8-yard quarterback sneak before breaking Roger Staubach's franchise record for rushing TDs at that position.

Oh, and two-time rushing champion Ezekiel Elliott did his usual thing — with a little emphasis on his punishing style.

The Dallas run game was dominant and diverse in a 37-10 dismantling of Philadelphia for sole possession of the NFC East lead, a victory that stopped a three-game losing streak. Now the Cowboys (4-3) get a break before trying to start another winning streak after the promising three-game run to start the season fizzled.

Elliott had 111 yards on 22 carries, scoring early on a 1-yard run a play after running over safety Malcolm Jenkins and getting credit for a touchdown before replay showed his knee down before the ball crossed the goal line.

Austin's TD and Prescott's 30 yards on a season high-tying five attempts didn't account for all the wrinkles in the first game in franchise history with touchdowns from a quarterback, running back and receiver.

Elliott's backup, Tony Pollard, was used early — starting with a winding 11-yard run when he somehow kept his knee off the ground after getting tripped in the backfield.

"I don't know if I was more excited about any part of the game as I was on that play," Prescott said after the rookie finished with 28 yards on eight carries.

The Cowboys rolled up 189 yards rushing — 116 more than Philadelphia's No. 2-ranked run defense had been allowing.

"A lot works when Zeke can physically run the ball," owner Jerry Jones said. "I thought Zeke just appeared to be at an extra strength, or extra physical tonight."

Under the circumstances, Prescott may have had his best game of the season. Besides the tone-setting sneak when he kept his legs churning and powered through the line of scrimmage in the first quarter, he was 21 of 27 for 239 yards passing with a touchdown. His 8-yard scoring run for the final points broke Staubach's club record of 20 TDs rushing by a quarterback.

The 2016 NFL Offensive Rookie of the Year acknowledged being too aggressive on an interception in the Philadelphia end zone with a 30-10 lead early in the fourth quarter. "I thought he played an outstanding game," coach Jason Garrett said. "He was really in command of everything and played really well in situational football."

The Cowboys have had issues with penalties that were either poorly timed or involved bad judgment. Linebacker Jaylon Smith hit Carson Wentz in the helmet on a third-down incompletion, drawing a roughing-the-passer penalty that kept a drive alive. Two plays later, Xavier Woods was flagged for unnecessary roughness on a hit after Alshon Jeffery dropped a pass when the safety easily could have pulled up. The Eagles scored their only touchdown on that possession.

Athletic trainers. The Cowboys had all their starting offensive linemen and top three receivers together for the first time since Week 2. There was a chance four of them would miss the game because of injuries. Six-time Pro Bowl left tackle Tyron Smith returned after missing two games with a sprained ankle, and right tackle La'el Collins was back after missing one week with a knee injury.

No. 1 receiver Amari Cooper had five catches for 106 yards after leaving early the week before in a loss to the previously winless New York Jets because of a thigh injury. Slot man Randall Cobb returned after not playing against the Jets because of a back injury and just missed a touchdown catch when his stretch at the goal line came up short.

Receiver Michael Gallup finished the day tied for the league lead with five dropped passes. It's probably a coincidence for now because Prescott still trusts him, but the second-year player was targeted a season-low four times against Philadelphia, with three catches for 38 yards. Both of those were season lows as well.

Linebacker Leighton Vander Esch didn't return after leaving in the first half with a neck injury but said after the game it was a "minor stinger." Defensive end Robert Quinn was sidelined by a rib injury. Executive vice president of personnel Stephen Jones said Monday the club expected both to be available following the open week.

4 — The Dallas defense forced four turnovers after having just five for the season coming into the game. Brett Maher now has the four longest field goals in club history in just his second season after making a 63-yarder against the Eagles. The only kicker in NFL history with three from at least 60 yards has two from 62 and one from 59.

The Cowboys get an extra day off with their open week. They return at the New York Giants on Monday, November 4.