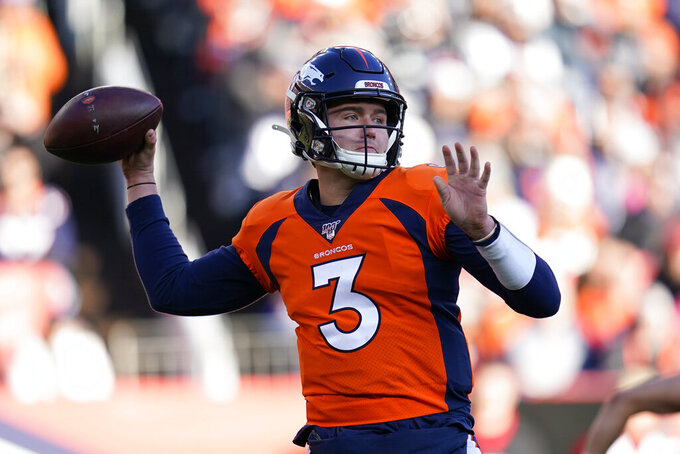 FILE - In this Dec. 29, 2019, file photo, Denver Broncos quarterback Drew Lock throws a pass during the first half of an NFL football game against the Oakland Raiders in Denver. John Elway says expectations for Lock this season are "definitely tempered" by the effects of the coronavirus that scuttled the regular offseason and all preseason games(AP Photo/Jack Dempsey, File)

“Not being able to be with the guys as much as you normally would is not going to change how I feel going into the season,” Lock said Friday. “I still want to do the things ... I thought we could do this year.”

The first offseason after a quarterback’s rookie year usually is crucial to his development and his chances for long-term success because it’s the first time he’s immersed in the pro game and can absorb advanced concepts that build on the crash course from his rookie year.

Lock and three other members of last year’s rookie QB class -- the Jaguars’ Gardner Minshew, the Giants’ Daniel Jones and Washington’s Dwayne Haskins -- not only missed out on that in-person progress but also were left to navigate a catch-up training camp while operating out of a new system.

After Lock went 4-1 last December, Elway spent his offseason building around him, signing free agents Graham Glasgow and Melvin Gordon and drafting Jerry Jeudy, K.J. Hamler, Lloyd Cushenberry III and Albert Okwuegbunam, all of whom could be starting come September.

Given all the changes, Elway was asked this week if expectations for Lock in Year 2 should be tempered.

“The expectations of Drew — I mean, he did play well for five games, but that was only five games last year. He didn’t have the offseason this year, which for young football players is always very, very important. I know he spent a lot of time throwing to the receivers and getting the timing and doing what they could do away from the facility. We’re very young on the offensive side.”

Because Lock spent three months on IR last year with an injured thumb on his throwing hand, he’s essentially still a rookie, and Elway said back in 1983 “I always remember as a rookie it was important for me to see other helmets and not just Bronco helmets.”

The NFL scuttled the entire four-week preseason at the players’ request to allow them to slowly ramp up their football fitness, something that's both beneficial and detrimental as the roster gets built.

“I was hoping for a couple preseason games just because we are so young on the offensive side to get to see somebody else," Elway said. "We’re going to have to deal with it.

"Today’s world is adjusting, so we’ll adjust to that. The mature kids will come in and do everything they can to get up to speed, but again, they’re going to be young guys without an offseason program. We definitely have to give them some rope and temper it a little bit and take it one practice at a time.”

While Lock remains defiant in the face of these obstacles, he said he’s also a realist.

“The real factor of it is yes, we didn’t get enough time with each other. We’re going to get a shortened period of time to pick up a lot of things extremely quick and it may not be the prettiest at first,” Lock said. “But our job is to make the mistake, learn from it and try not to make that mistake more than once because we really don’t have time to make the same mistakes."

A third-round pick in 2015, Heuerman spent his rookie year on IR after blowing out his left ACL covering a kickoff at the team’s rookie minicamp.

He totaled 63 catches for 678 yards and five touchdowns in 51 career games.

Heuerman faced long odds of making the roster this year with a tight end corps that features Noah Fant and newcomers Okwuegbunam and Nick Vannett along with Troy Fumagalli, Andrew Beck, Jake Butt and Austin Fort.