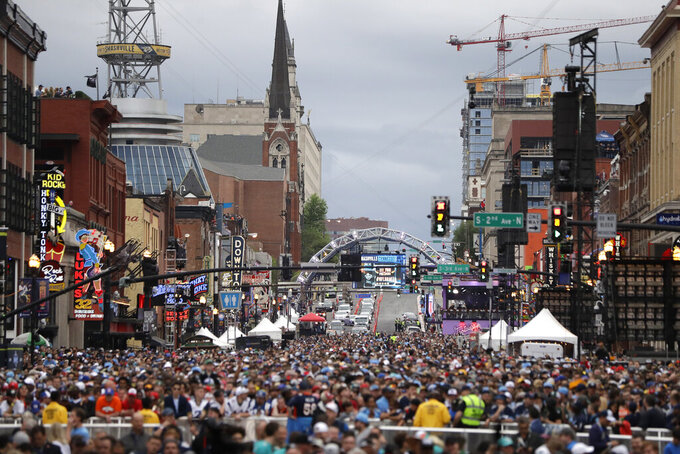 Fans watch the main stage ahead of the first round at the NFL football draft, Thursday, April 25, 2019, in Nashville, Tenn. (AP Photo/Mark Humphrey)

PHILADELPHIA (AP) — The Philadelphia Eagles loaded up on offense in a draft filled with defensive talent.

Hoping to bolster a unit that was 18th in scoring last season, the Eagles selected Penn State running back Miles Sanders with the No. 53 overall pick and Stanford wide receiver JJ Arcega-Whiteside at No. 57 in the second round of the NFL draft on Friday night.

"We have an affinity for scoring points," personnel boss Howie Roseman said.

Sanders had 1,274 yards rushing, an average of 5.8 yards per carry and nine touchdowns as a junior last year after replacing Saquon Barkley. He helps replace Jay Ajayi, who wasn't re-signed after tearing an ACL last season.

The Eagles hadn't selected a running back this high since choosing LeSean McCoy also with the 53rd pick in 2009. McCoy became the franchise's all-time leading rusher before Chip Kelly traded him to Buffalo in 2015.

"Miles was a coaching staff favorite, a scouting favorite, a front office favorite," Roseman said. "We think he's a special talent and a perfect fit for our offense."

Sanders had issues with ball security, fumbling five times, and needs improvement as a pass protector.

"Those are things we talked about it and addressed it with him and we have one of the best running backs coaches in the NFL in Duce (Staley)," Douglas said.

Ajayi was acquired midway through the 2017 season and teamed with LeGarrette Blount in a formidable backfield during Philadelphia's run to a Super Bowl title. Both are gone now. Sanders joins Corey Clement and Jordan Howard, who was acquired in a trade with Chicago. Wendell Smallwood and Boston Scott are also on the roster.

"He creates separation and he showed his athleticism at his pro day," Roseman said.

Both of Arcega-Whiteside's parents were professional basketball players in Europe. Several draft projections had him going in the third round and the Eagles passed up Ohio State's Parris Campbell (No. 59 to Colts) and D.K. Metcalf (No. 64 to Seattle).

"West Coast guys who play late get a little underrated because people aren't watching those West Coast games," Roseman said. "But this guy is a baller. When our fans get to know him, they're going to love him. He symbolizes Eagles football."

"Having this amount of depth and talent is something we're going to need to get us through hopefully a 19-week season," Roseman said.

The Eagles traded up three spots to select Washington State left tackle Andre Dillard with the 22nd pick in the first round, sending Baltimore the 25th pick, a fourth-rounder (No. 127) and a sixth (No. 197) to move up. Dillard isn't expected to contribute right away, barring injuries. He'll learn behind nine-time Pro Bowl left tackle Jason Peters, who is 37 years old.

Philadelphia has only two picks remaining, No. 138 in the fourth round and No. 163 in the fifth.

Roseman said the team will be aggressive pursuing undrafted rookies.