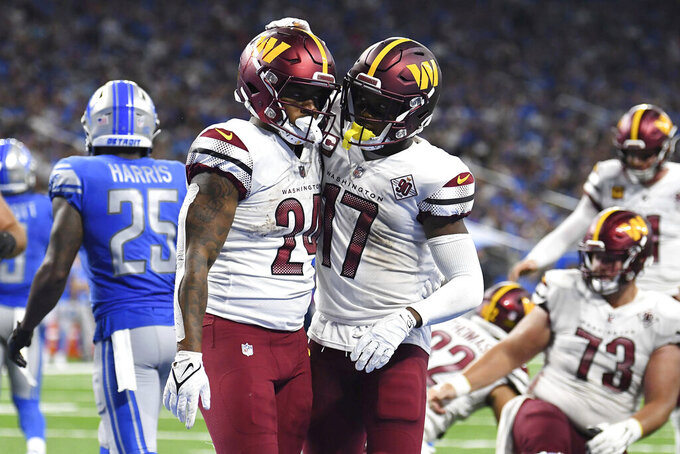 Washington Commanders running back Antonio Gibson (24) celebrates his touchdown run with wide receiver Terry McLaurin (17) during the second half of an NFL football game against the Detroit Lions Sunday, Sept. 18, 2022, in Detroit. (AP Photo/Lon Horwedel)

BETTING LINE: Eagles by 6½ according to FanDuel Sportsbook

AGAINST THE SPREAD: Philadelphia 1-1; Washington 1-1

TURNOVER DIFFERENTIAL: Eagles plus-3; Commanders minus-3

EAGLES PLAYER TO WATCH: QB Jalen Hurts has shown the ability to carve up defenses with his throwing arm and his legs. The running part is dangerous against a Washington defense that has not been able to stop much on the ground and could get caught wondering which way Hurts will turn next.

COMMANDERS PLAYER TO WATCH: DT Daron Payne played with Hurts at Alabama and has been one of Washington's best defenders so far this season. With pass rusher Chase Young out at least the first four weeks and Jonathan Allen playing through a sore hamstring, Payne creating pressure along with Montez Sweat is how the Commanders defense can start to be effective.

KEY MATCHUP: Commanders QB Carson Wentz against Eagles CB Darius Slay. After intercepting former Washington quarterback Kirk Cousins twice on Monday night, Slay could be all over top opposing receiver Terry McLaurin and is looking to pick off Wentz, whose mistakes in certain situations paved his way out of Philadelphia a couple of years ago. It's crucial Wentz picks his spots and doesn't force throws in Slay's direction.

KEY INJURIES: Eagles LB Haason Reddick is dealing with a knee injury. ... CB Avonte Maddox has a back injury. ... With Commanders starting C Chase Roullier on injured reserve, Wes Schweitzer is expected to take his place despite missing Week 2 with a hamstring injury. ... DE Casey Toohill may not play after going into concussion protocol. ... S Kam Curl is expected to make his season debut after missing the first two games with a right thumb injury.

SERIES NOTES: Philadelphia and Washington are facing off for the third time in each team's past seven regular-season games going back to December. ... Wentz is facing the Eagles for the first time since they traded him following the 2020 season. They picked Wentz with the second pick in the 2016 draft, and he played five seasons for them. ... The Eagles have won four of their past five games at Washington and eight of 10 overall in the series.

STATS AND STUFF: Philadelphia put up 450-plus yards in back-to-back games for the first time since 2014. ... Hurts' 723 yards combing passing and rushing are second among QBs in the NFL, trailing only Tua Tagovailoa. ... Against the Vikings, Hurts became the first player in league history to throw for 300-plus yards, complete more than 80% of his passes and have two or more rushing touchdowns. ... WR A.J. Brown ranks fifth in the league with 15 catches. He has 224 yards receiving in his first two games with the Eagles. ... WR DeVonta Smith had a career-high seven catches against Minnesota. ... Philadelphia's defense has forced 10 three-and-out drives this season, ranking third in the league. ... DT Fletcher Cox has has at least a half sack in three consecutive games going back to last season. He has 15 in 19 career games vs. Washington. ... Slay's five passes defensed against Minnesota were a career high. ... Washington hasn't been 2-1 through three games since 2018. ... Wentz is the first QB since at least 1950 to throw for three-plus TDs and 300-plus yards in each of his first two starts with a team. ... WR Terry McLaurin's 468 yards receiving against the Eagles since making his debut in 2019 are the most they've given up to any player in that time. ... WR Curtis Samuel had a team-high seven catches and 99 yards from scrimmage in Week 2. ... WR Jahan Dotson is one of two rookies with a TD catch in each of the first two games of the season. ... Payne has had a sack in each of Washington's first two games. ... LB Cole Holcomb has 10-plus tackles in five of his past six games going back to last season. ... CB Kendall Fuller had three passes defensed against the Lions.

FANTASY TIP: Given the Commanders' struggles defending against the run, Philadelphia's Miles Sanders, Boston Scott and Kenneth Gainwell are all strong candidates to start. Sanders is expected to get the bulk of the carries, but all three have a rushing touchdown this season. The Eagles also lead the league with 28 explosive plays (completions of 16-plus yards and runs of 10-plus), an area Washington struggled in at Detroit.