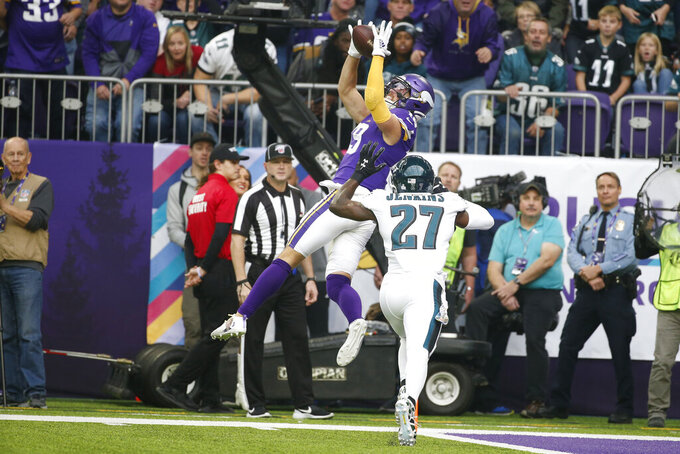 Minnesota Vikings wide receiver Adam Thielen, left, tries to catch a pass over Philadelphia Eagles strong safety Malcolm Jenkins (27) during the first half of an NFL football game, Sunday, Oct. 13, 2019, in Minneapolis. Thielen was ruled out of bounds on the play. (AP Photo/Bruce Kluckhohn)

MINNEAPOLIS (AP) — Philadelphia cornerback Rasul Douglas settled in near the sideline after his initial backpedal, playing zone coverage while Minnesota's Stefon Diggs kept on speeding down the field midway through the second quarter.

That safety help over the top never came.

Diggs hauled in the 51-yard completion from Kirk Cousins for his second too-easy score in a span of less than three minutes, giving the Vikings a three-touchdown lead on their way to a 38-20 victory over the Eagles on Sunday.

Pass defense has definitely not been Philly's thing so far this year. The Eagles gave up 300-plus yards passing for the fourth time in six games, as Diggs racked up a career-best three scores with 167 yards and Cousins found the end zone four times. Cousins went 22 for 29 and topped the 300-yard mark against the Eagles for the second game in as many years. For the fifth time in six games, the Eagles were scored on during the first drive against them, with four touchdowns and one field goal allowed.

"We're a confident group," said Douglas, who had penalties for holding and pass interference. "We know what we can do. You're not about to play in the league and not have a bad game. Everybody has bad games."

With starters Ronald Darby (hamstring) and Avonte Maddox (neck/concussion) out again with injuries, Douglas and Sidney Jones were in the lineup. Jones was beaten by Adam Thielen with a slick double move for Minnesota's first touchdown and also had penalties for holding and pass interference.

Douglas and Jones were just the most noticeable culprits, though. Veteran safety Malcolm Jenkins took the blame for leaving Douglas out to dry on the second touchdown by Diggs. After their 10-sack game against the New York Jets last week, the Eagles took Cousins down behind the line of scrimmage just once. Middle linebacker Nigel Bradham hurt his ankle and sat out the second half, and the Eagles were biting hard on the run fakes by Cousins.

"They do a good job of balancing run and play action," Jenkins said. "We knew that coming in."

Outside linebacker Zach Brown, who played with Cousins in Washington, had the zinger of the week when he told reporters in Philadelphia that Cousins was "the weakest part" of the offense and welcomed him to throw the ball. Brown refused to answer questions after the game about his trash talk gone wrong.

Cousins has responded to one of the roughest games of his career, two weeks ago in defeat at Chicago, with a pair of demonstrative performances.

"Maybe that linebacker who popped off ticked him off," Vikings coach Mike Zimmer said.

Now the Eagles (3-3) are one defeat down in a make-or-break six-game stretch of their schedule, with trips to Dallas and Buffalo on deck. Then they return home to play Chicago, take their week off, and come out of the bye with consecutive home games against New England and Seattle. The combined record of those six opponents entering the week was 22-8.

"We're all in this together," coach Doug Pederson said. "It's an ownership, and it starts with me."