EXPLAINER: Was Devon Allen too fast for his own good? 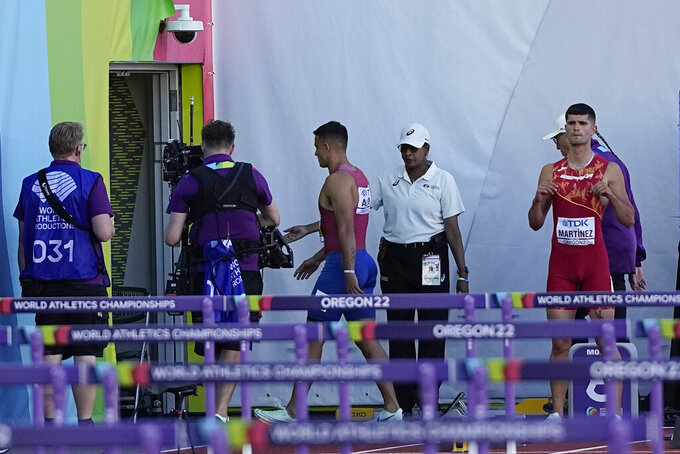 Devon Allen, of the United States, leaves the track after getting disqualify in the 110 mens hurdles final at the World Athletics Championships on Sunday, July 17, 2022, in Eugene, Ore. (AP Photo/David J. Phillip)

EUGENE, Ore. (AP) — Hurdler Devon Allen did not jump before the starting gun. He got disqualified for a false start anyway. That sent parts of the track and field world — and also the NFL world that he will be part of soon — into a frenzy.

Allen's DQ for a false start in the 110-meter hurdles came Sunday night and put a slight damper on an otherwise otherworldly performance by the United States at world championships in Eugene, Oregon. The Americans won nine medals — a record for one day. It could've been 10 had Allen been allowed to run the race.

A rundown of what happened:

Q: Did Allen really leave the starting blocks too early?

A: Depends on the definition of early. The sensors in the starting blocks measure what's called “reaction time,” which is the amount of time it takes for a runner's foot to leave the block after the starting gun goes off. Obviously, if a runner leaves the starting block before the gun goes off, it's an easy call. But there is also a rule that says it's a false start if a runner leaves within 0.1 seconds AFTER the gun sounds — the idea being that nobody could possibly react that quickly to the gun.

Q: What happened with Allen?

A: His reaction time was measured at 0.099 seconds. That's one-thousandth of a second too fast. He lingered near the starting line after receiving his red card, and looked at the replay in a monitor in the infield. Ultimately, though, rules are rules, and Allen went back underneath the stadium to watch Grant Holloway win the gold medal.

Q: Is this rule fair?

A: There was a flurry of activity on social media saying it wasn't. One element that stands out: In the semifinals, Allen's reaction time was 0.101 seconds — an indication that either he got very lucky that time. Or, given what happened a few hours later in the final, that quite possibly, an athlete who starred as a wide receiver at Oregon and is getting a tryout with the Philadelphia Eagles, has some otherworldly reflexes that even those who line up next to him on the track don't often match.

Q: What about those starting blocks?

A: In an almost comical episode last year at Olympic trials in the same stadium, nine restarts were needed on a single day — five in the 110 hurdles and four in the women's 400 hurdles — because of malfunctions in the starting blocks. No one was disqualified. There was no word on whether the same technology was in place at worlds.

Q: Why didn't Allen get a warning?

A: A first false start used to result in a warning for the entire field, then the next false start resulted in a DQ. But officials changed that rule in 2010, largely because false starts ran rampant and slowed down the pace of the meets. One of the most high-profile victims of the new rule was none other than Usain Bolt, whose false start at the 2011 world championships cost him a chance at the 100-meter title.

Q: What's next for Allen?

A: Training camp with the Philadelphia Eagles, which begins July 26.