Fans arrive in droves to honor Bowlen at public tribute 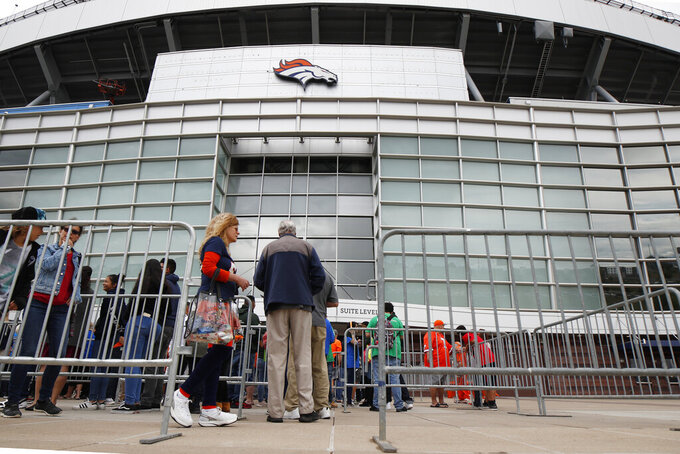 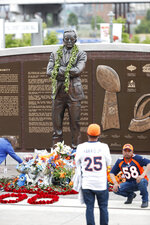 DENVER (AP) — Some wore full costumes and others sported jerseys, including one Denver Broncos supporter with "P. Bowlen" on the back. Quite a few devotees stood in the rain for about an hour before making their way inside the stadium.

The fans arrived in droves Tuesday to pay respect to owner Pat Bowlen, who died last week at 75 after a long battle with Alzheimer's, and just two months shy of his enshrinement into the Pro Football Hall of Fame.

The public tribute to Bowlen at Broncos Stadium at Mile High featured all sorts of memorabilia, including his famous fur coat , Super Bowl trophies , vintage photos, videos and numerous footballs marking big moments. Then there was his desk, which was noteworthy for a piece of paper resting in his in-box . It was a to-do list containing three items: be No. 1 in everything; beat the Raiders; win the Super Bowl.

Of course, all three boxes were checked.

"He'd be incredibly overwhelmed by all this support and love," said Brittany Bowlen, who along with her siblings stood in line for hours greeting fans as they made their way through the exhibit. "It's pretty astonishing, to see all these artifacts and things that were important to him in life. He'd be incredibly overwhelmed by the support. It would be moving for him."

Super fan Jesse Esquibel wore some of his game-day outfit for the occasion, including a mask. He's known as "Bronco Reaper," a name he selected after experiencing a few near-death encounters throughout his life. Another supporter wore an orange Darth Vader helmet.

"I wanted to show," Esquibel said, "that Broncos fans are fans through and through."

Peyton Manning was in attendance. So was John Elway. Longtime receiver Rod Smith recounted a golf game when he partnered with Bowlen and they took on coach Mike Shanahan and quarterback Brian Griese.

"We ended up winning. You should've seen his face — he was fired up," Smith said. "In the weight room, didn't matter where he was, on the treadmill, Pat was competitive."

"There's not a person in this community who's had a more profound impact on Denver and the state of Colorado and really the Rocky Mountain region than Pat Bowlen," Denver Mayor Michael Hancock said. "I wanted to make sure I came and paid my respects to the family and the memory of a great man who's done a lot for all of us."

A private funeral service will be held Monday, with Bowlen's good friend John Finney delivering the eulogy. Finney, who lives in Honolulu, has so many rich stories from their longtime friendship. Like how they used to paddle a canoe through giant waves in Hawaii, or how they opened a business together, or their trips on Bowlen's jet.

"He had a lot of friends from all walks of life here, from beach boys to bankers," Finney said in a phone conversation. "He was devoted to the Broncos and devoted to winning."

Finney recalled the time Bowlen came back to Hawaii soon after the Broncos were beaten 55-10 by the San Francisco 49ers in Super Bowl 24. Bowlen steered clear of their beach club for about a month, knowing he would be razzed.

"So Pat finally shows up after a long absence and (someone) says, 'Great game, brah,'" Finney cracked. "We're always teasing one another."

A competitor with class, that was Bowlen's reputation.

"There was not a dishonest bone in his body," Finney said. "He was so respected in the NFL, because the other owners could trust him. He wanted to be part of the betterment of the NFL, and it worked."

And on Tuesday, Beth Bowlen Wallace paid respect to the legion of Broncos fans that showed up by saying: "This one is definitely for you all."