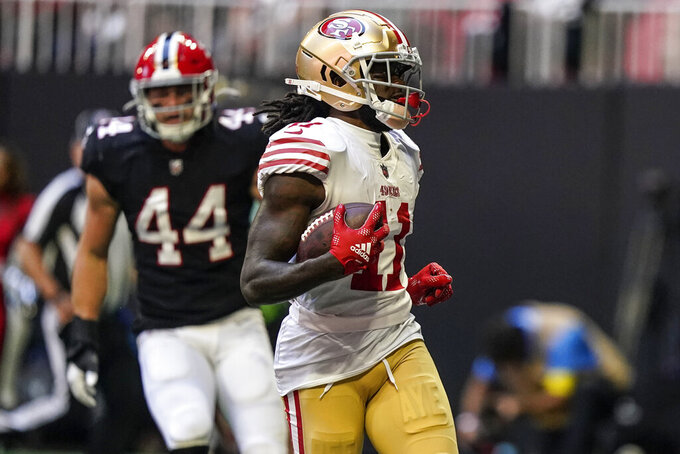 San Francisco 49ers wide receiver Brandon Aiyuk (11) runs into the end zone for a touchdown against the Atlanta Falcons during the first half of an NFL football game, Sunday, Oct. 16, 2022, in Atlanta. (AP Photo/Brynn Anderson)

Russell Wilson has an initial partial projection because of a hamstring injury. If he is projected as a full-go, then he is rating out as 45% likely for a top-12 week.

If Mac Jones does not play, Bailey Zappe is rating as a 29% play.

Even at a full projection, Jameis Winston is a preferred sit candidate; the same would apply to Andy Dalton.

Kenny Pickett and Mitch Trubisky are initially projected for a workload split. They’re not QB1 options in shallow leagues either way.

The bye week quarterbacks — Josh Allen, Jalen Hurts, Matthew Stafford, and Kirk Cousins — are particularly impactful for Week 7. That’s two stars and two quality starters. There are still a handful of surefire options even without them, but that does leave Tier 2 looking pretty long — and a bit shaky. That said, we still have nearly a dozen quarterbacks in the confident start tier, so you likely have one of them rostered and can avoid the drop-off.

The model still likes Aaron Rodgers well enough. He has had a tough schedule so far, and according to our Passing Net Expected Points (NEP) metric, which is numberFire’s expected points model, Rodgers has played just below expectation once accounting for opponents faced. Only one of the defenses he’s squared off with thus far has ranked outside the top 20 in adjusted pass defense (per our numbers). The Washington Commanders, his Week 7 opponent, are 23rd. In the lone game with a comparable matchup to this one, Rodgers still had only 195 yards and no touchdowns against the Minnesota Vikings. Consider looking elsewhere if you have the option to do so this week, but don’t go too far down the list to avoid Rodgers.

Although Trevor Lawrence hasn’t been consistently fantasy-friendly, he is shaping up as a potential streamer for needy teams. He faces a New York Giants defense that ranks 18th in adjusted pass defense, a tier in which Lawrence’s opponents have lived in 2022.

Excluding a single matchup against a top-five defense, Lawrence has played five games against teams ranked 16th through 23rd in adjusted pass defense. In them, he’s averaged 18.7 fantasy points while putting up a 52.5% passing success rate and 0.17 Passing NEP per drop-back. The NFL average this season is only 0.06, so there are still reasons to be interested in Lawrence as a high-end QB2 in fantasy formats.

We might be eager to want to rush back to this offense, but take a look at some other names above him if possible.

Jonathan Taylor was limited in practice on Thursday and Friday for Week 6, but was ruled out before last Sunday. At a half workload, he is projected for a 40% top-24 rate. At a full workload, he is at 80%.

With the Detroit Lions on a bye in Week 6, we didn’t learn much about the status of D’Andre Swift. He is initially projected at half of his usual workload, but bumps up to 60% if projected fully.

The snap rate for Raheem Mostert scaled back to 62.5% last week, but he was on the injury report last week, so that might have had something to do with it. We’ll see how he progresses this week. Still, we’re not in a position to scoff at a majority snap rate from any running back, and Mostert has played on at least half of the Miami Dolphins’ snaps in five straight games and on at least 60.0% in three consecutive. In that three-game stretch as a more involved piece in the Miami offense, Mostert is averaging 15.7 carries, 2.7 targets, and 83.7 yards from scrimmage for 11.0 half-PPR points.

We should be cautious with Jeff Wilson if possible. In Week 5, Wilson had 132 scrimmage yards on 22 carries and two targets while playing 57.4% of the San Francisco 49ers’ offensive snaps. In Week 6, the Niners trailed, and his role scaled back to a 50.9% snap rate, a workload that yielded seven carries and one target for just 25 total yards. This week, the rushing matchup against the Kansas City Chiefs is enviable (they’re 24th in rushing success rate allowed to opposing backs). However, the likelihood of playing from behind means that we could see more of a Week 6 role for Wilson than what he had in Week 5. Just think before locking him in.

Can we finally start Tony Pollard? Maybe. It depends on the expectations. Pollard feels very involved in the Dallas Cowboys’ offense, and that offense should be getting Dak Prescott back under center this week.

Pollard is yet to play on more than 54.7% of the team’s snaps, and his high-water mark since Week 2 is just 42.6% while Ezekiel Elliott maintains a majority-back role. On a positive note, Pollard’s snaps are more productive than most: he gets a carry or target on 45.8% of his snaps (compared to 45.1% for Elliott and 38.8% as a position-wide average). The matchup with the Detroit Lions is very promising as well. They’re allowing 0.99 rushing yards over expectation to opposing backs as well as a 51.3% rushing success rate, each of those ranking 29th in the NFL. Both Elliott and Pollard are flex-worthy plays in this spot, and the model loves Elliott even more than that.

Keenan Allen is projected at a half workload. With a full return, his top-24 odds are 49%.

Brandon Aiyuk and the rest of the 49ers had some increased passing volume their way in a negative game script in Week 6. Aiyuk handled 11 targets for 83 yards and two touchdowns against the Atlanta Falcons. The 49ers are underdogs this week against the Chiefs, and that should lead to more volume for the pass-catchers again. San Francisco has a 53.1% pass rate so far this season, ranking them 25th in the league. When trailing by seven or fewer (and excluding two-minute drill possessions), their pass rate is up to 65.6%, and their pass rate over expectation is +3.3%. It may not be point-chasing to go after Aiyuk again this week.

On the other side of that game, we have a few options with the Chiefs’ pass-catchers who are borderline plays once again. Last week saw JuJu Smith-Schuster rack up 113 yards and a touchdown on his five targets. He did that by having a perfect catch rate and accruing 81 yards after the catch. He entered last week with only 136 yards after the catch (27.2 per game) on the year.

Marquez Valdes-Scantling, meanwhile, didn’t catch any of his three targets a week after setting season highs in catches (six), targets (eight), and yards (90).

Collectively, their matchup isn’t ideal, as the 49ers are 10th in adjusted fantasy points per target allowed to receivers. However, they are allowing a catch rate over expectation of +2.0% and may have had some early touchdown luck. Don’t rule them out just because of a tough on-paper matchup.

I’m still seeing the Washington Commanders’ pass-catchers ranked well most places, but the simulations are noticeably lower on them. Terry McLaurin and Curtis Samuel will see downgraded efficiency with Taylor Heinicke under center in Week 7 and beyond.

Heinicke’s 2021 season featured more than 500 drop-backs, but just 0.01 Passing NEP per drop-back and a 45.0% passing success rate, marks that were 0.09 and 2.1 points below the position average, respectively.

In 2021, Washington ranked 25th in pass rate, as well. They’ve been a bit pass-heavier to start 2022 with Carson Wentz, but we could see that volume change again now that Heinicke is back under center. Even a matchup against the Green Bay Packers (31st in adjusted fantasy points per target allowed to receivers) isn’t enough to make them priority starts over a lot of their peers.

Darren Waller was limited in Week 5 with a hamstring injury; there has been no update since then given the Las Vegas Raiders’ bye.

Pat Freiermuth could to be cleared for Sunday.

Despite a full practice on Friday entering Week 6, Dalton Schultz did not play on Sunday night.

A larger role existed for Robert Tonyan in Week 6 after Randall Cobb’s injury. Tonyan finished Week 6 with 12 targets for 90 yards. That equated to a 27.3% target share. We can’t simply extrapolate that rate out for the rest of the way, but the context around it is elite: it would rank him behind just Mark Andrews (33.1%) on the season among the position.

The Seattle Seahawks’ receivers were limited in Week 6, and that funneled targets to the rest of the team, but Noah Fant has had an uptick in market share for the past two games (20.8% and 23.3%). In that span, he’s averaging 6.0 targets and 47.0 yards. On paper, the Los Angeles Chargers pose a difficult matchup (they’re tops in adjusted fantasy points per target allowed to tight ends), but have also allowed a catch rate over expectation of +6.0% to the position.