Flying again: Mims to be active, Crowder returning for Jets 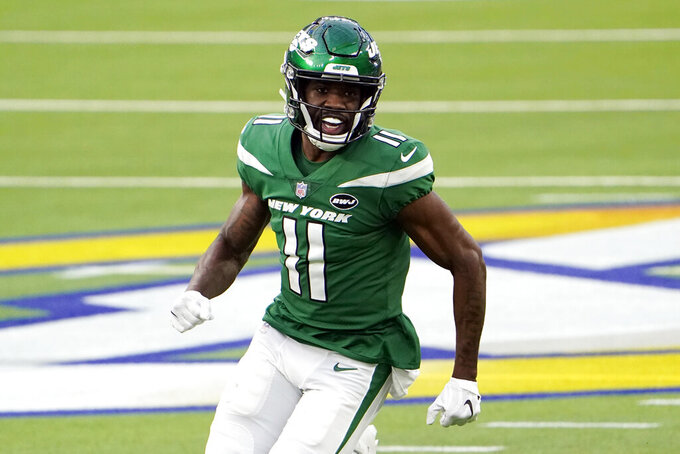 FILE - New York Jets wide receiver Denzel Mims runs against the Los Angeles Rams during an NFL football game in Inglewood, Calif., in this Sunday, Dec. 20, 2020, file photo. New York Jets fans have been clamoring the last few weeks for Denzel Mims to see the field again. The second-year wide receiver will get that opportunity Sunday against Tennessee. Coach Robert Saleh announced Friday, Oct. 1, 2021, that Mims will be active for the game after the second-round pick from last year was a healthy scratch the past two weeks.(AP Photo/Jae C. Hong, File)

The second-year wide receiver will get that chance Sunday against Tennessee.

Coach Robert Saleh announced Friday that Mims will be active for the game after the second-round pick from last year was a healthy scratch the past two weeks.

“He’s going to get an opportunity,” Saleh said. “Hopefully he takes advantage of it, and we’re expecting him to. He’s stacked up a third consecutive week of great, deliberate practice. He’s really getting comfortable within the offense. We’re excited to see him get his op.”

Mims' situation has been one of the biggest topics of conversation during the Jets' 0-3 start. He was active in the season opener at Carolina, but didn't play until late in the game — when he had a 40-yard reception down the sideline.

But it has been his only reception so far as he was inactive the past two weeks.

While some fans and media have wondered how a second-round pick from a year ago could fail to crack an offense that has scored just 20 points in three games, both Saleh and offensive coordinator Mike LaFleur have explained it has been a numbers game.

The Jets' top wide receivers are Corey Davis, Jamison Crowder, Elijah Moore and Keelan Cole. Beyond that, versatility is key. Braxton Berrios — who actually leads the team with 14 catches and 150 yards receiving — is New York's primary punt and kick returner. Jeff Smith is also considered one of the team's top gunners on punts. Mims doesn't play special teams, so he has been the odd man out, even with Crowder missing the first three games, first with COVID-19 and then a groin injury.

That all changes this weekend, though.

Although Crowder, listed as questionable, is set to make his season debut after being limited for two days, both Moore and Smith have been ruled out with concussions. Moore was injured last Sunday during the 26-0 loss at Denver, while Smith was hurt in a car accident on the way to the team's facility on Wednesday.

That presents Mims, who declined to speak to reporters Friday, with an opportunity to get back into a game.

“You see all the potential he has — he has the size and he can go up and make plays,” Crowder said. “Just as I'm excited to get back out there, I'm excited for him to get out there and get opportunities.”

Mims had 23 catches for 357 yards in nine games, including eight starts, last season after dealing with hamstring injuries in training camp. The former Baylor star flashed some deep-threat speed in then-coach Adam Gase's offense, but a new system came in with the hirings of Saleh and LaFleur, who runs a Shanahan-style offense in which it's crucial receivers run precise routes.

But Mims missed time in the spring after a tough bout with food poisoning which caused him to lose 20 pounds. It put him behind in finding a role on the field, something he's still trying to do.

“Like I’ve said the last couple weeks, he’s getting better and better,” LaFleur said Thursday. “We’ll see what the situation happens with the two guys that were out (Wednesday), but if he’s up, we feel more confident that he’s going to go out there and make plays.”

Either way, the return of Crowder is expected to give the Jets an immediate boost.

The 28-year-old veteran has led New York in receptions the last two seasons and established himself as one of the league's top slot receivers. He's eager to help the struggling offense. New York is ranked last in the NFL in scoring, 30th in overall offense and passing, and 29th in rushing.

“I'm excited to get back out there and contribute to the team,” Crowder said. “It just took me a little while to get my body going, so I'm ready to go for Sunday.”

NOTES: S Ashtyn Davis will make his season debut Sunday after starting the year on injured reserve while working his way back from a foot injury suffered last December. With starters Marcus Maye (ankle) and Lamarcus Joyner (elbow) out, Davis will help Adrian Colbert, Jarrod Wilson and Sharrod Neasman fill the void. “Obviously, we can’t get him a full game in there because he hasn’t played football in a year,” Saleh said, “but we do plan on getting him part of the rotation.” ... The initial prognosis on Maye was he'd likely miss three to four weeks, but Saleh was optimistic about a faster return. “Thankfully for the bye week (in Week 6), he’ll only miss a couple of games rather than three or four. We’re hoping he’ll be back for New England (on Oct. 24).”