Free-agent pickups have made a difference for some champions 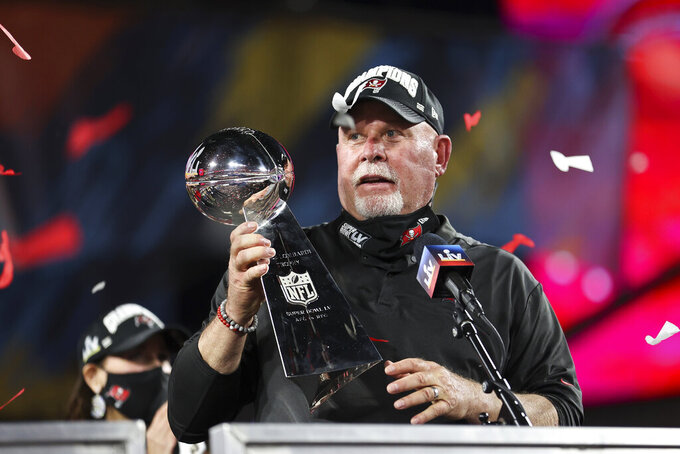 Long-term success is built through the draft, though teams can gain an edge toward winning a championship by supplementing their roster in free agency.

Look no further than the Tampa Bay Buccaneers, who, of course, signed Tom Brady last year. Brady led the Bucs to their second Super Bowl title and his seventh.

Tampa Bay coach Bruce Arians called Brady the “missing piece” for a team that had won seven games in 2019 and hadn’t reached the playoffs since 2007.

“I knew how good of a football team we had and what we were missing,” Arians said days before Brady led the Buccaneers to a 31-9 victory over Kansas City. “We were missing that belief that we were good enough.”

Brady immediately instilled a winning mentality in his teammates upon his arrival in Tampa following 20 seasons with the New England Patriots.

“I think the great quarterbacks all have it. They have the ability to will themselves on other people to make sure that everybody has bought in to the cause,” Arians said. “The cause is a ring – putting a championship in your trophy case. Tom brings that attitude every single day and it permeates through the entire locker room.”

But Brady wasn’t the only key free agent the Buccaneers added last offseason. Running back Leonard Fournette, wide receiver Antonio Brown and kicker Ryan Succop were signed in 2020. The Bucs also traded for tight end Rob Gronkowski, who came out of retirement.

The defense, which shut down Patrick Mahomes and the Chiefs’ high-powered offense in the Super Bowl, is filled with homegrown talent from star linebackers Devin White and Lavonte David to the entire starting secondary: Carlton Davis, Sean Murphy-Bunting, Jamel Dean, Jordan Whitehead and Antoine Winfield Jr.

But Arians knew the Buccaneers needed to get the right leader at the most important position. Asked at last year’s NFL combine who he wanted, Arians didn’t hesitate.

“The question back then was, ‘If there was a quarterback that was a free agent, who would you want?’ Of course, it was Tom Brady, not thinking he’d become a free agent,” Arians said. “Once he did, it was a pursuit that we wanted to make and (we) knew he had some interest.”

Other teams who won Super Bowls after making important pickups in free agency:

John Elway’s free-agent spending spree in 2014 paid off in 2015 when the Broncos beat the Carolina Panthers 24-10 to win the Super Bowl in Peyton Manning’s final season.

The Eagles made several key signings in free agency in 2017, adding wide receivers Alshon Jeffery and Torrey Smith, running back LeGarrette Blount and nickel cornerback Patrick Robinson. Each played an important role in helping them reach the Super Bowl.

But they beat the Patriots 41-33 because of an under-the-radar signing who ended up outplaying Brady and earning Super Bowl MVP honors. Nick Foles got an $11 million, two-year deal to be the backup quarterback. When Carson Wentz went down in Week 13, Foles stepped in and became a Philly folk hero.

Bill Belichick wasn’t known for spending money in free agency until this year. But a pair of signings in 2017 helped the Patriots reach the Super Bowl that season and win it the following year.

New England gave cornerback Stephon Gilmore a five-year, $65 million contract and defensive tackle Lawrence Guy a four-year, $20 million deal in March 2017. Gilmore has been a two-time All-Pro and was the 2019 AP Defensive Player of the Year. Both players were part of a defense that shut down the Los Angeles Rams’ high-octane offense in a 13-3 win in the Super Bowl following the 2018 season.