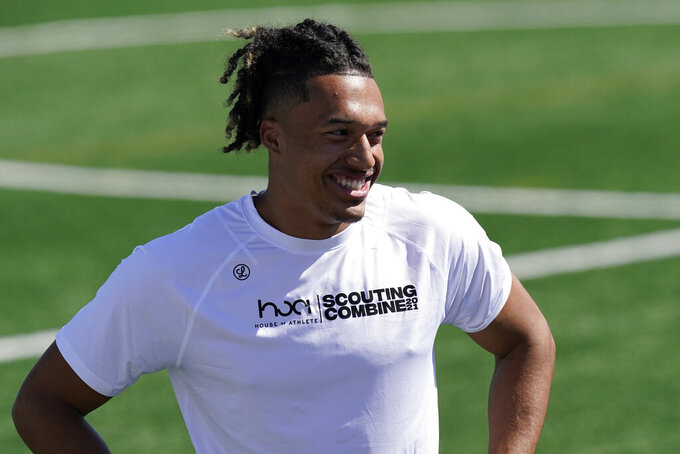 FILE - In this March 5, 2021, file photo, Texas A&M quarterback Kellen Mond watches the competition at a mini combine organized by House of Athlete in Fort Lauderdale, Fla. The Minnesota Vikings have drafted Mond, with their first of four third-round picks in the NFL football draft. (AP Photo/Marta Lavandier, File)

MINNEAPOLIS (AP) — For the first time since he signed with the Minnesota Vikings, Kirk Cousins has some competition on the depth chart.

There won't be any mystery this year about who the quarterback is, but Kellen Mond will surely be taking notes.

The Vikings drafted Mond out of Texas A&M with the 66th overall pick on Friday night, targeting a potential successor to Cousins with their first of four third-rounders.

North Carolina linebacker Chazz Surratt came next at No. 78 overall. Then the Vikings checked boxes at positions of the most glaring needs, with Ohio State guard Wyatt Davis (No. 86) and Pittsburgh defensive end Patrick Jones II (No. 90).

Mond was the No. 66 overall pick, the seventh quarterback off the board after five went in the first 15 selections. Mond, who was a four-year starter for the Aggies, has the ability to be the type of dual-threat player that's all the rage now for his position in the NFL.

“We felt he was on the right trajectory and has a lot of upside to develop,” general manager Rick Spielman said, before dismissing a question about whether he'd need to explain the decision to Cousins: “Kirk’s our starting quarterback.”

Cousins is under contract for two more years and $66 million guaranteed, so the Vikings have the benefit of time for Mond to develop. There's rarely a downside to that, and one of the dings against Mond during his career in the gauntlet of competition that is the SEC was that he was inconsistent.

“If you look at it literally, I think everyone to a certain extent is inconsistent. It’s just about reducing that inconsistency,” Mond said on a video conference call with reporters. “But I’m a guy who loves to learn, and I’m sure Kirk is going to have so many different tips and tools."

Mond managed to improve his completion percentage every year and in 2020 had 19 touchdowns with three interceptions in 10 games. He also had 294 yards rushing and four scores. Mond finished as the program record holder in passing yards, touchdowns and several other categories. The native of San Antonio went 3-0 in bowl games.

The Vikings entered the draft without a second-round pick, due to the trade with Jacksonville that fetched defensive end Yannick Ngakoue near the end of training camp. They flipped him after six games to Baltimore but got only a late third-rounder (No. 90 overall) to cover their losses.

Spielman stayed true to form, though, moving down nine spots in the first round to net two additional third-round picks (Nos. 66 and 86) in a swap with the New York Jets. Their own selection (No. 78) gave them yet another asset to try to jump up into the second round for a higher-rated prospect, but they didn't bite and found their quarterback of the future anyway.

“We felt like the asking price was too much,” Spielman said. “We decided to stay patient.”

Mond, the MVP of the Senior Bowl after leading Texas A&M to a 9-1 finish in the pandemic-shortened 2020 season, is the highest-drafted quarterback by the Vikings since Teddy Bridgewater was a first-round pick in 2014.

Speaking of quarterbacks, that's what Surratt was until he switched to the other side of the ball.

“We felt that he had such natural instincts for the position. He run and he can cover and he can hit,” Spielman said.

The Vikings addressed one of their most pressing matters in the first round after the trade with the Jets by picking Virginia Tech’s Christian Darrisaw, who will slide in at left tackle.

Darrisaw arrived at team headquarters on Friday for the standard meet-and-greet, one of the pre-pandemic customs being reintroduced as teams around the league take baby steps back toward normal operations.

With his long-armed, 6-foot-5, 322-pound frame and an athleticism to handle NFL-caliber speed on the edge, Darrisaw ought to give Cousins — and, someday, Mond — more confidence to deliver those critical passes from the pocket. Darrisaw didn’t allow a sack in 2020, his junior year for the Hokies.

“I just take pride in keeping the quarterback clean. I had the mindset that the quarterback’s not going to get touched my way, and if that happens, then usually a big play will happen,” Darrisaw said. “Blocking the blind side, you’ve got to get the play started first."

With Darrisaw and Davis, who could take over at left guard, the Vikings could finally field an offensive line that's all composed of day one or two draft picks with center Garrett Bradbury (first round, 2019), right guard Ezra Cleveland (second round, 2020) and right tackle Brian O'Neill (second round, 2018).

The 6-foot-4, 315-pound Davis — who is the grandson of the late Willie Davis, a Hall of Fame defensive end for the Green Bay Packers — meets the goal of coach Mike Zimmer to bulk up the interior of a line that has often been overpowered by stronger and bigger rushers.

“Let’s get bigger up front, and that was a directive," director of college scouting Jamaal Stephenson said. “Wyatt Davis definitely fits that mold.”

The story has been updated to correct that Mond is highest drafted quarterback by Vikings since Teddy Bridgewater in 2014.