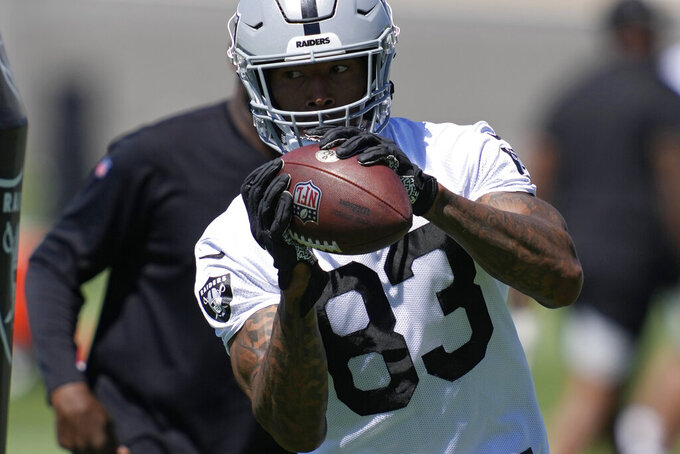 George Kittle and many of the NFL’s tight ends will gather in a few weeks for the second Tight End University camp. They’ll watch film, run routes, catch passes and surely talk about being underpaid as a position group.

The idea to bring all the tight ends together generated from Kittle inviting Greg Olsen to work out with him in Nashville last year. Olsen, the three-time Pro Bowler who will become the lead analyst for Fox, suggested they turn it into an event. Travis Kelce loved the idea and it grew from there.

“Basically the whole concept is just bring as many as we can get under one roof and just talk ball, be on the field, watch each other run routes, just ask questions, learn from each other, and then just hang out and get to know each other through,” Kittle said on the AP Pro Football Podcast.

More than 50 professional tight ends attended the camp last year and 75 are expected for the three-day event at Vanderbilt University on June 22-24. Former players are coming, too. Kittle said Hall of Famer Tony Gonzalez and Dallas Clark are planning to be there and he’s hoping to get Antonio Gates.

“We’re really excited about bringing them back,” Kittle said. “Really the whole thing is doable because we have such fantastic partners. We’re presented by Charmin. They’ve been a wonderful partner for us and they’re really allowing us to do all these awesome things. ... And then at the end of it, with all the money that’s left over, we just donate it right back to all these charities in Nashville, and it’s awesome. We did a lot of work with the Boys and Girls Club last year, but we were able to donate a lot of money to kids in need, and that’s the whole point. We get kids to come out, they play some football with us, and then we get to go do all of our football stuff.”

Las Vegas Raiders tight end Darren Waller is excited to go back for the second year and Kittle said a few quarterbacks, including San Francisco’s Trey Lance, are coming out to throw passes.

“Just building relationships with guys and having conversations with them just as human beings, but also the classroom aspect,” Waller said. “George teaching more specifics about the run game. Greg Olsen teaching certain routes that he was able to build a career off of just running consistently.

"Travis Kelce talked about just his creativity and his route-running and not being a robot in how you run routes but really putting your personality into how you run routes. And then, I was able to get up there and talk about option routes and choice routes. So it’s just guys who are amazing in different facets of their game sharing and not being afraid to share what they’ve learned and the knowledge they’ve accumulated. It doesn’t get any better than that there.”

No doubt the tight ends will talk about earning more money.

“For all the things that we do in the run game, the pass game, it makes a lot of sense for me for tight ends to get paid even more,” Kittle said. “And while we’re trending in the right direction, I was able to set the market a little bit and guys are now making more money, it’s up to younger guys who are coming into contracts. I hope T.J. Hockensen gets $17-18 million. I hope other guys are making money like that. Darren Waller is going to be up for a huge contract here soon as well.

"And they deserve that money. I hope that they can reset the market and blow the top off because that’s the only way we’re going to get paid more as guys just keep playing at a high level and keep adding on, keep stacking and hopefully we get up there at some point. But I do still think tight ends are undervalued and underpaid, but hey, it’s a game that we play and we’re just living in it and just trying to be better.”

Waller has two years and $13.8 million remaining on his deal. He just saw Cleveland give David Njoku four-year, $56.75 million contract extension. Njoku caught 36 passes for 475 yards and a team-high four touchdowns last season. Waller has averaged 84 catches, 1,002 yards and five TDs over the past three seasons despite missing six games in 2021.