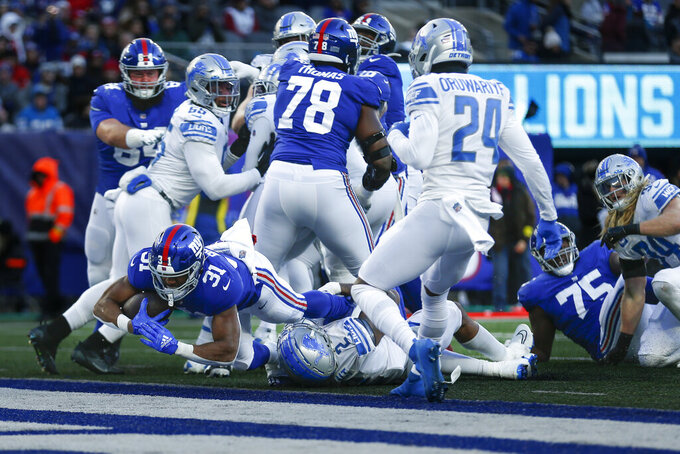 New York Giants running back Matt Breida (31) dives in for a touchdown against Detroit Lions linebacker Austin Bryant (2) during the second half of an NFL football game, Sunday, Nov. 20, 2022, in East Rutherford, N.J. (AP Photo/John Munson)

EAST RUTHERFORD, N.J. (AP) — The New York Giants are going to be without top cornerback Adoree Jackson on Thanksgiving against the Dallas Cowboys, and the list may be a lot longer before kickoff.

Coach Brian Daboll on Tuesday said that Jackson will be sidelined for the first time this season with a knee injury that happened returning a punt against Detroit in Sunday's 31-18 loss.

Six Giants were injured in the game and Daboll said there will be a lot of game-time decisions on who will be playing. Rookie wide receiver Wan'Dale Robinson is going to miss the rest of the season with an ACL injury.

The biggest concerns are at cornerback and on the offensive line. Besides Jackson, cornerback Fabian Moreau is a question mark with an oblique injury. He has been starting since Aaron Robinson went down with a knee injury.

If Moreau can't play, the Giants would have to use rookie Cor'Dale Flott and second-year pro Rodarius Williams along with Darnay Holmes and Nick McCloud.

The offensive line has been without starting right tackle Evan Neal (knee) for the past three games and it is uncertain whether he will be able to return this week. Center Jon Feliciano, left guard Josh Ezeudu and right tackle Tyre Phillips also all have neck issues, while starting left tackle Andrew Thomas (illness) and guard Shane Lemieux (toe) were added to the injury report Tuesday.

Because of the short week, the Giants (7-3) held walkthroughs instead of practicing.

“It’s going to go right to the end,” Daboll said. “We’ll see who we have healthy.”

The Giants are hoping to get some reinforcements when they play host to Washington on Dec. 4. Outside linebacker Azeez Ojulari (calf) should be ready to come off injured reserve and there is a possibility rookie tight end Daniel Bellinger may be ready to play for the first time since injuring an eye and needing surgery following a game in Jacksonville on Oct. 23.

“We’re not the only line in the league that’s dealing with stuff, guys going down and stuff like that," Neal said. "It’s the nature of this game, and it’s pretty much next man up.”

Cager was promoted off the practice squad the past three games and caught four passes for 29 yards and a touchdown.

Vannett was released by New Orleans on Saturday. He has played in 80 regular-season games with 35 starts for Seattle, Pittsburgh, Denver and New Orleans.