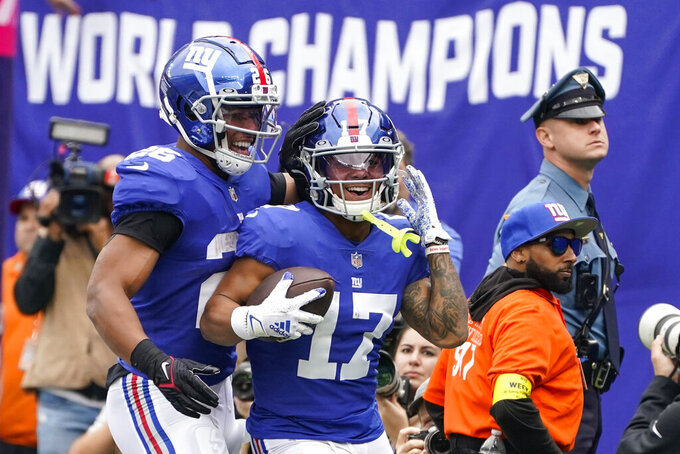 New York Giants' Wan'Dale Robinson (17) celebrates with teammate Saquon Barkley (26) after scoring a touchdown during the first half of an NFL football game against the Baltimore Ravens, Sunday, Oct. 16, 2022, in East Rutherford, N.J. (AP Photo/John Minchillo)

Want to laugh at the Giants and Jets?

Football in the Big Apple is rotten no more. But it certainly has been a while.

The Giants are 5-1 after an impressive 24-20 win over Lamar Jackson and the Baltimore Ravens on Sunday. The Jets are 4-2 after stunning Aaron Rodgers and the Packers in Green Bay 27-10.

They both are riding three-game winning streaks and have winning records together for the first time since 2015. There's a tangible culture shift being felt in the facilities of both teams. It has stemmed from changes in coaching staffs, building young player cores through the draft and injecting fresh approaches to adversity — and success.

“It’s something we’ve preached since Day One, since we’ve been here — coaches, people in the building — this league is hard," Giants first-year head coach Brian Daboll said. "It’s not always going to be perfect. There will be a lot of people down on you. And you might be down on yourself, wish you could do better.

“But you keep on getting back up. You keep on swinging, keep on competing, regardless of the score or the situation of the game. And that’s not easy to do, right?”

Just ask any Giants or Jets fan that has endured lots of losing the past few years, but has suddenly seen their frustration turn to cautious optimism. Griping on sports talk radio and social media is now more about XXXXXXXXXXX.

It's the first time since 2010 both New York/New Jersey-area teams have won at least four of their first six games. It's also only the sixth time since the 1970 merger that it has happened.

The promising starts are a surprise to many — especially since the Giants haven't been to the playoffs since 2016 and the Jets have the NFL's longest postseason drought at 11 seasons.

“The Jets are better than we thought,” Hall of Fame coach Tony Dungy said Sunday during NBC's “Football Night in America. ”A lot of good things happening from that Jets offense and defense. Young guns just hustling, fighting, playing well and just getting the job done.”

The same can be said of the Giants, whose 5-1 start under Daboll is the team's first since 2009.

“Playing smart football, what fits their football team," said Dungy's on-air teammate Chris Simms — whose father Phil was part of two Super Bowl-winning teams with the Giants. "They’re just making the game close waiting for you to make a mistake. They’re very comfortable in those one-score games late in the fourth quarter.”

The Giants have overcome 10-plus point deficits three times this season, with the win over Baltimore the latest. They also pulled off wins after being down 17-3 midway through the second quarter against the Packers in London two weeks ago, and trailing Tennessee 13-0 at halftime in the season opener.

Daboll's bunch is the fourth team to record three such wins within the first six games of the season.

“I think it’s the same mentality that we have every week," defensive lineman Leonard Williams said. "We’re a team that fights all four quarters, every minute of the game. And I think the best thing about this team is we don’t bend, we don’t fold, we don’t break and all that type of stuff.”

Meanwhile, the Jets are off to their best start since 2015, when they also opened 4-2 before finishing 10-6 under Todd Bowles.

After the Jets lost their season opener 24-9 to Baltimore, coach Robert Saleh insisted things were going to turn positive for the franchise.

“It’s going to happen," Saleh said then, just one game into his second season. “We’re all taking receipts on all the people who continually mock and say that we ain’t going to do anything. I’m taking receipts, and I’m going to be more than happy to share them with all y’all when it’s all said and done.”

It seemed funny then. Not anymore.

The Jets have been betting underdogs in every game. They open as 3.5-point underdogs at Denver next week. None of that matters to the Jets, who joined the 2001 Cleveland Browns as the only teams in the Super Bowl era to have a winning record despite being an underdog in each of its first six games.

“We have a lot of guys here that don’t care about what’s been said in the past about this organization," said left tackle Duane Brown, in his first season with the Jets. “We’re here to write our own story - and so far, it’s been a pretty good one."

During their three-game winning streak, the Jets rallied from 10 points down at Pittsburgh to beat the Steelers in Zach Wilson's season debut; they turned a close game against Miami into a blowout with a 21-point fourth quarter to end a 12-game skid vs. AFC East opponents; and then dominated Rodgers and the Packers at Lambeau Field.

“We’ve got to start expecting stuff like this,” Saleh said. "It is a big win obviously because any time you win in this league is big. But they’re another opponent, another championship opportunity. We’ve got to get ready to go next week.”

Because the jokes could return in full force with a few lousy games.

But for now, the armchair comedians need to find new material. Now, about those baseball teams ...