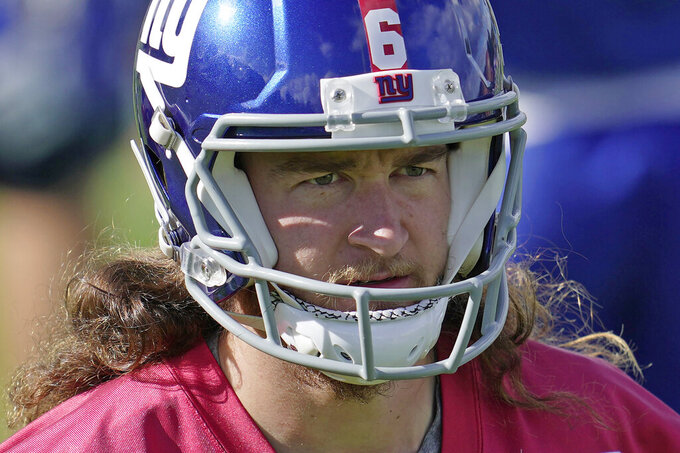 Before he celebrates a homecoming when the Giants face the Green Bay Packers on Sunday in London, he wanted to pay tribute to his alma mater, the University of Arkansas at Pine Bluff.

It's a historically Black university — an HBCU — and Gillan had no idea what that meant when he accepted its scholarship offer. He thought it was “a sponsor or something.”

“I showed up there and I was very much a minority at the school, which didn’t matter to me. I’ve grown up in many different places with my dad’s job being in the military,” said the 25-year-old Gillan, whose flowing, red locks extend below the back of his helmet.

Gillan, a native of Inverness in the Scottish Highlands, moved to southern Maryland as a teenager. His father worked in anti-submarine warfare for the British armed forces. He started kicking and punting in high school where he earned his nickname.

“It was just a totally different experience from what a lot of people have done in football and maybe sports,” Gillan said after the Giants practiced Friday in the English countryside north of London.

“But it taught me a lot of things. Although I am grounded it was a very grounding experience for four years there, especially with some of the guys I played with, the backgrounds they came from, only made me appreciate everything that my family provided for me that much more over the years. It was a different four years. It was tough in certain areas, but it made me who I am right now. It was great."

Gillan's parents, sister and close friends will be in attendance Sunday at Tottenham Hotspur Stadium. He'll see his parents before then, opting to stay near the hotel rather than visit London.

“I’m probably going to stay in Ware and hang out with my mom and dad. I haven’t seen my dad in a long time, so it will be really good to see them,” he said.

Gillan spent three seasons with the Cleveland Browns but was waived last December, and he signed with the Buffalo Bills' practice squad. He joined the Giants in early February.

Gillan is averaging 51 yards per punt — with a net average of 41.3 yards — and has six punts inside the 20 and three touchbacks.

He's still working on his touch — so that he doesn't crush the ball into the end zone.

“That’s something he’s going to always have to deal with because he has such a strong leg,” Giants special teams coordinator Thomas McGaughey said. “He's getting better. That’s all you can ask for as a coach. Just keep working at it, keep trying to control the power. It’s encouraging, for sure.”

No complaints from Gillan.