Giants QB Daniel Jones is suddenly a celebrity after 1 game 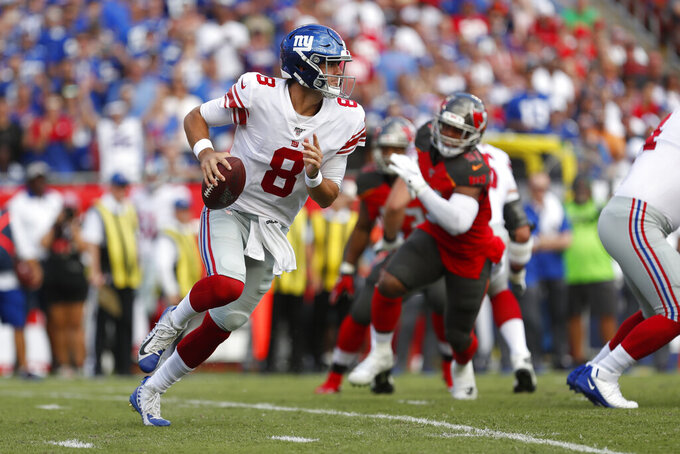 EAST RUTHERFORD, N.J. (AP) — Daniel Jones has become one of the hottest commodities in the New York City metropolitan area, and beyond.

Look at the lead to most of the local sports shows, and even some national shows. It's mostly about the Giants rookie quarterback. The videotape of the kid from Duke scampering into the end zone from 7-yards to cap a 32-31 come-from-behind win over the Tampa Bay Buccaneers is being played three days later.

When Jones talked before the full media Wednesday as the Giants (1-2) began preparations for Sunday's game against the winless Washington Redskins, it was a feeding frenzy.

There were 11 camera crews, photographers, beat writers and more columnists than usual around to listen to the new-found folk hero, who replaced two-time Super Bowl MVP Eli Manning and put some life back into the season.

Asking a question in the roughly 10-minute interview period was like a shouting match.

The Giants even changed their normal routine. Manning used to speak in front of his locker on Wednesdays. Jones was on the patio at the team facilities in the Meadowlands to give everyone a little room.

What was interesting was Jones didn't change in the least. He came off as a low-key Manning clone when the Giants took him with the sixth pick overall in the draft and nothing changed after his career started in spectacular fashion, running for two touchdowns and passing for two more.

When asked about his new celebrity status, a wry smile appeared on his face.

It was hard to tell whether Jones was amused, surprised or even liked it. The 22-year-old laughed a little. He said his life has not changed.

"It's the same thing," he said. "I go home and then I come into work every day. But no, I don't feel like it's changed a whole lot."

He said he is aware that he is in more demand and he has received more messages from family and friends, telling him what they see.

"But like you said, I'm trying to focus on this week, focus on what we're doing here and making sure that I'm preparing myself to play as well as I can this week."

Jones hit 23 of 36 passes for 336 yards and become the first Giants quarterback with at least two passing and two rushing touchdowns in a game since Nov. 28, 1948, when Charlie Conerly did it against the Boston Yankees.

Jones also is the second quarterback since the 1970 merger to throw for at least 300 yards and two touchdowns and run for two scores in his starting debut.

The next step is doing it again Sunday.

"I think, like I said, there is a whole lot that I need to clean up to do better," he said. "I'll focus on that, I'll lock in on those things this week and hopefully play better on Sunday. I'm looking forward to that."

Giants coach Pat Shurmur had a funny line when asked if Jones either had changed in any way since the weekend or if he was carrying himself any differently.

"You're asking if he has a big head?" Shurmur said. "Is that what you're asking? No. No. Not at all. I see the same player I saw last week preparing to play his first game."

Sterling Shepard, who caught one of Jones' two TD passes, had played his entire career with Manning. But he was impressed how Jones lifted the team after an 0-2 start. He played well and he used a few words in the huddle that caught teammates by surprised. He cursed.

"He's smart and he plays with a lot of poise," Shepard said. "You can see that, and you usually don't see that out of a rookie."

"Some of the things he did were crazy," added center Jon Halapio, who said the one play that stood out to him was the game-winning, fourth-down touchdown run up the middle with 1:16 to play.

It's the play that keeps showing up on television.

Jones has seen it a few times. When asked if he ever turned the channel, he sounded like Manning.

Coming from the celebrity, it drew laughter.

NOTES: LB Alec Ogletree (hamstring), LB Tae Davis (concussion), RB Saquon Barkley (ankle), DT Olsen Pierre (knee) and WR Russell Shepard (foot) did not practice. LB Lorenzo Carter (elbow) and WRs Bennie Fowler (hamstring) and Cody Latimer (concussion) were limited. ... RB Wayne Gallman will start for Barkley, who will be sidelined for an extended time, according to Shurmur. "I view it as a big opportunity, an opportunity I've had since I came into the league. It's unfortunate for my brother to go out, but this is what I've prepared for," Gallman said. ... The Giants will probably sign RB Jon Hilliman to the practice squad. With Barkley out, Eli Penny is the only other RB.