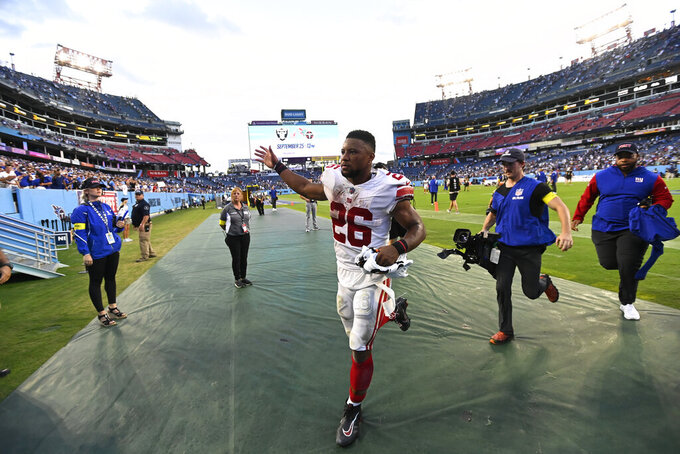 OPENING LINE: Giants by 1 1/2, according to FanDuel SportsBook.

TURNOVER DIFFERENTIAL: Panthers minus-1. Giants minus-1.

PANTHERS PLAYER TO WATCH: RB Christian McCaffrey. McCaffrey only got 14 touches in the loss to the Browns. He only had five touches in the team’s first 27 plays, far below what was expected. Coach Matt Rhule knows the 2019 All-Pro needs to be more involved and that is expected to happen this week. Look for a heavy dose of McCaffrey early in the game, particularly in the running game.

GIANTS PLAYER TO WATCH: Defensive end Leonard Williams didn’t play in the preseason and finished with five tackles in the opener. He helped bottle up Titans RB Derrick Henry. Expect him to be in the face of both Mayfield and McCaffrey.

KEY MATCHUP: Saquon Barkley vs. Panthers' run defense. Barkley had a huge game in Week 1 rushing for a league-best 164 yards on 18 carries as the Giants came up with a big win against the Tennessee Titans. Given the Panthers allowed Nick Chubb, Kareem Hunt and the Browns to rush for 217 yards and average 5.6 yards per carry in the season opener, New York will almost certainly look to exploit that weakness.

KEY INJURIES: The Panthers will be without returner Andre Roberts, who was placed on injured reserve following a Week 1 knee injury. Shi Smith is the backup punt returner but he is questionable with a groin injury. Either Chuba Hubbard or Smith will handle kickoffs. Giants WR Wan'Dale Robinson (knee) and starting CB Aaron Robinson (appendicitis) are out. WR Kadarius Toney (hamstring) is questionable and starting OLs Azeez Ojulari (calf) and Kayvon Thibodeaux (knee) are doubtful.

SERIES NOTES: The Panthers won the first three games in the series and three of the past four.

STATS AND STUFF: The Panthers have lost eight straight games going back to last season, the longest active streak in the NFL. ... Rhule is 10-24 as the head coach. ... Panthers offensive coordinator Ben McAdoo was the Giants offensive coordinator from 2014-2015 before serving as head coach from 2016-2017. ... He was the most recent coach to lead them to the playoffs (2016). ... Mayfield had four fumbles on snap exchanges last week, although none of them resulted in turnovers. ... Mayfield had five passes batted down at the line of scrimmage by the Browns. ... WR Robbie Anderson had five catches for 102 yards vs. the Browns, including a 75-yard touchdown in the fourth quarter. ... Rookie LT Ickey Ekwonu allowed two sacks in Week 1, one of which resulted in a fumble. Giants QB Daniel Jones had his highest single-game completion rate last week, finishing 17 of 21 (81%) for 188 yards, two TDs and an interception. ... WR Sterling Shepard caught a 65-yard TD pass and led New York with 71 yards receiving. ... Rookie LB Tomon Fox has the team’s only sack. ... S Xavier McKinney had all five of his interceptions at home last season. ... WRs Kenny Golladay and Kadarius Toney are looking for their first TDs as Giants after failing to reach the end zone even once last season.

FANTASY TIP: Barkley. This is the best and the healthiest Barkley has been since his rookie season. He scored eight of the Giants’ 21 points and his 164 yards rushing and 194 total yards from scrimmage were league highs. He’s also had success against the Panthers. He had 129 yards from scrimmage — 81 receiving and 48 rushing — and caught two TDs in his only career game vs. Carolina on Oct. 7, 2018.