Giants vaunted D falters, fails to get off field vs. Broncos 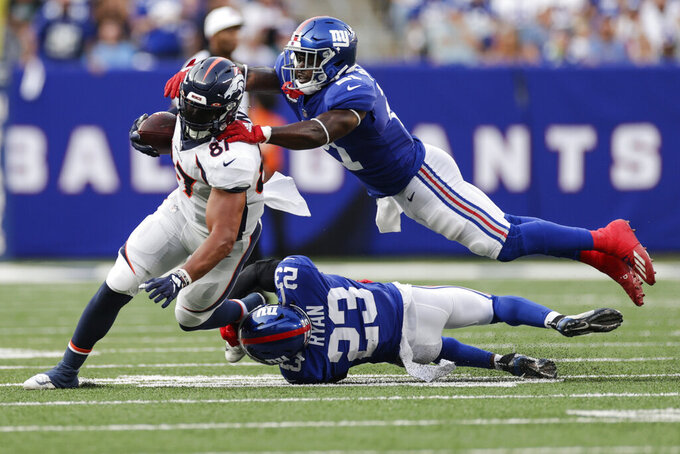 EAST RUTHERFORD, N.J. (AP) — The New York Giants' vaunted defense was supposed to carry the team while Daniel Jones and his banged-up skill players on offense ironed things out after an training camp marked by injuries.

In the opening game of the season, the D just couldn’t get off the field.

Teddy Bridgewater threw two touchdown passes and kept the Broncos on the field for more than 35 minutes by making one clutch play after another in a 27-13 win over the Giants at MetLife Stadium on Sunday.

The Broncos were 7 of 15 on third-down chances and made all three fourth-down opportunities. Bridgewater completed passes on the fourth-down attempts, with the last resulting in a 4-yard TD toss to Albert Okwuegbunam.

Giants inside linebacker Blake Martinez, who had nine tackles, said the inability to get off the field was backbreaking.

“I think we had a lot of chances,” Martinez said. “It came down to us just executing the play call, and we didn’t do that. Obviously, they made us pay for it.”

Denver’s 16-play, 75-yard drive to open the second half was the biggest case in point. Rookie linebacker Azeez Ojulari allowed Bridgewater to slip out of his grasp on the third play and complete a 10-yard pass to KJ Hamler. On the TD toss, the quarterback stiff-armed safety Xavier McKinney and got off the pass.

“That’s Teddy. Teddy’s been doing it all camp,” said Denver receiver Tim Patrick, who caught a go-ahead 2-yard TD pass just before halftime, “It’s nothing new to us. We knew he could do that stuff. It was up to us to get open and make a play.”

Denver finished with 420 yards on offense and their defense held New York to 314, including 60 yards rushing. Saquon Barkley had 26 yards on 10 carries in his first game since Sept. 20 of last year when he tore an ACL.

“It’s disappointing to lose anytime,” Barkley said. “I don’t think it’s any different if we put up 13 points or three points or put up 38 points and lost. Losing a game (stinks).”

The Broncos also forced a fumble by Giants quarterback Daniel Jones at their 15 in the third quarter with Denver ahead 20-7.

“Turnovers are always going to hurt you at any point in the game and they’re big plays,” said Jones, who finished 22 of 37 for 264 yards and a 4-yard TD run on the final play. “We’ve got to do a good job of taking care of the ball. But we’ll keep moving forward and keep improving.”

“We have to do a better job defensively playing our assignments and just making sure that we’re not having any busts back there, communication-wise,” he said.

Broncos coach Vic Fangio said the time of possession sometimes means nothing. This time it was important.

“We weren’t getting big plays,” he said. “We were more of Hank Stram matriculation which is good, if you can finish it with points. When you are going efficient, or matriculating, you got to be able to finish it.”