Giants' Williams says he got what he wanted in free agency 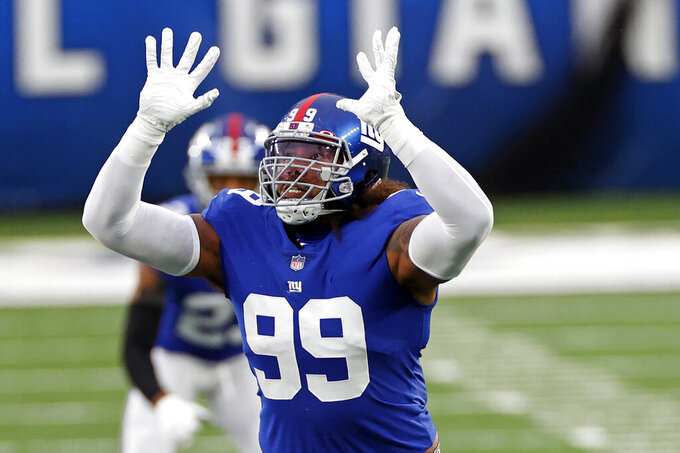 FILE - New York Giants defensive end Leonard Williams (99) is shown in action during an NFL football game against the Dallas Cowboys in East Rutherford, N.J., in this Sunday, Jan. 3, 2021, file photo. Leonard Williams got everything he wanted in a three-year, $63 million contract with the New York Giants before the start of free agency. (AP Photo/Adam Hunger, File)

Leonard Williams got everything he wanted in a three-year, $63 million contract with the New York Giants before the start of free agency.

The 26-year-old, twice-franchised defensive lineman got money, stability, the chance to play in the same defensive system that led to a career year and to be with a team and staff that had faith in him after a shaky start to his career with the Jets.

With everything now in hand, his goal is not to change, except to get better.

“I don’t feel the need to have to change or anything like that,” Williams said Thursday after signing his new contract at the team headquarters in East Rutherford, New Jersey.

Williams had a career-best 11 1/2 sacks this season along with 30 quarterback hits and 57 tackles. He was acquired from the Jets during the 2019 season and finished with half a sack but showed the ability to apply pressure and handle the run.

The Giants had franchised Williams for a second time last week and finalized a new deal that guarantees him $45 million. The big difference will be this year when the 2015 Jets' first-round pick counts only $11 million against the $182.5 million salary cap. That cleared up $8 million in cap space and allowed the Giants to make other moves, including two in the past two days.

A person with knowledge of the deals told The AP the Giants have worked out contracts with two-time Pro Bowl tight end Kyle Rudolph, fellow Vikings defensive end Ifeadi Odenigbo and veteran quarterback Mike Glennon. The person spoke on condition of anonymity because the deals have not been announced.

Rudolph, 31, is joining the team on a two-year contract after catching 28 passes for 334 yards and a career-low one touchdown in 12 games last season. He was playing on a Vikings' team that struggled on the offensive line and it cut down on his receptions. He had 83 catches in 2016.

Evan Engram is the starting tight end and the team has hopes his enormous talent and speed will yield one big, injury-free season. He is in the option year of his rookie contract and will count $6 million against the cap.

The Giants lost defensive tackle Dalvin Tomlinson to the Vikings in free agency this week.

Glennon probably will replace Colt McCoy as the backup to Daniel Jones. McCoy is a free agent.

Williams said he is in his prime and he has a lot of personal goals, which he would not disclose.