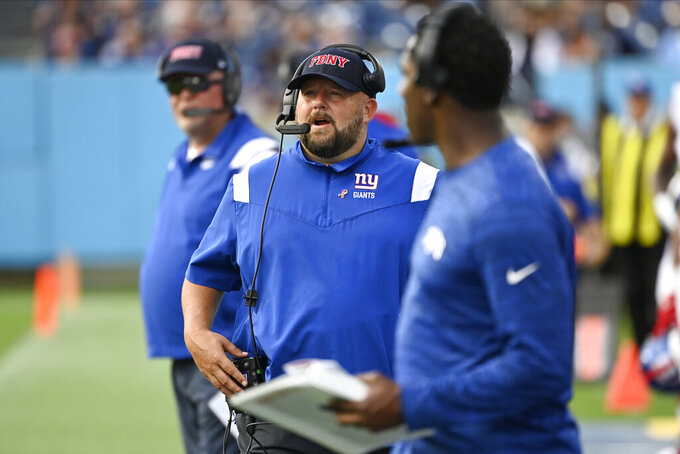 Speaking to reporters after practice Wednesday, Golladay confirmed Daboll told him earlier in the week he would not get much playing time against the Panthers on Sunday.

The 28-year-old, who has a $13 million base salary in the second year of a four-year, $72 million contract, didn't view his limited play as punishment. He said he has done everything the staff has asked of him.

“I should be playing regardless,” Golladay said, adding even teammates were confused by the decision.

Golladay struggled in his first season with the Giants, catching 37 passes in 14 games for 521 yards. He did not score a touchdown. He got the big contract from New York based on 2019, when he caught 11 touchdowns. He was limited in 2020 by injury.

Golladay said on Wednesday that he seemed uncertain about his role.

"Well, of course, you know, I really don’t agree with it or like it, but I mean, I can only control what I can control, that’s coming to work every day," the said.

Golladay said he immediately told Daboll last week how he felt after being informed he wasn't going to play a lot. He said the conversion was an exchange of ideas and not an argument. He would not say what the two said when asked if the coach told him he wanted more from him.

“I feel like everything that was done in the game I, for sure, could have done,” Golladay said, adding the positive was the Giants won to move to 2-0 on the season.

Golladay said he has never been treated this way in his football career. He has always played, when healthy.

The former Detroit Lions sidestepped questions about whether he would wanted to be traded if things don't change. He said he talked to general manager Joe Schoen but would not disclose details.

“I came here to play, I’m pretty sure, they also are paying me to play,” Golladay said. “I guess they want to see more.”

Golladay said his relationship with the coaching staff is business-like, noting players and coaches are co-workers. He said being on the sideline Sunday was odd and he tried to stay ready in case he was needed.

In the season opener against Tennessee, Golladay was on the field for 47 plays and had two catches for 22 yards. He is uncertain what his role will be against Dallas on Monday night.

“I’m going into every practice, thinking I’m going to play or whatever,” he said. “I mean, I treat every rep out there, like a game rep. So if I do play, what is it Monday night, I’ll be ready to go.”

NOTES: DL Leonard Williams (knee) underwent rehab and was not on the field for practice. He has started 21 consecutive games and never missed a game in his eight-year career. ... CB Aaron Robinson (appendicitis) is not ready to practice. ... WRs Sterling Shepard (rest), Kadarius Toney (hamstring) and Wan’Dale Robinson (knee) did not practice.