Good-plus-lucky equals a 2-0 start for the Cardinals 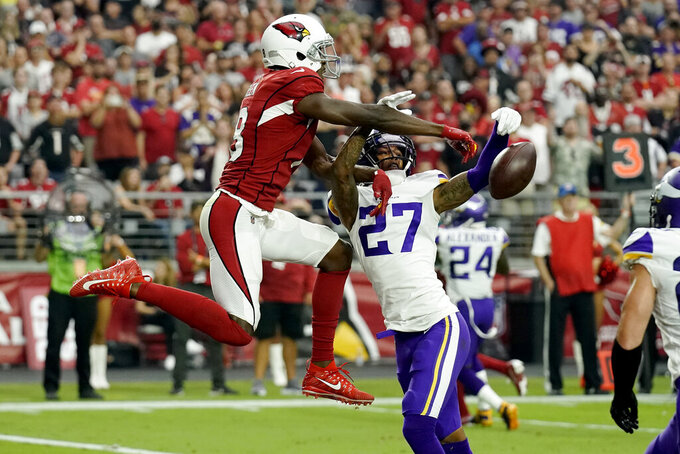 GLENDALE, Ariz. (AP) — The Arizona Cardinals have proven that they're a pretty darn good football team through two weeks.

They're also a little lucky.

That's a great combo for a 2-0 start in the NFC West, where it looked as though a lot of wins are going to be needed to win the loaded division that also includes the San Francisco 49ers (2-0), Los Angeles Rams (2-0) and Seattle Seahawks (1-1).

Yes, the Cardinals got some good fortune in their 34-33 win over the Vikings when Minnesota kicker Greg Joseph pushed a potential game-winning, 37-yard field goal wide right in the final seconds.

But Arizona is also making a lot of its own luck: Third-year quarterback Kyler Murray had more jaw-dropping moments with 400 yards passing and three touchdowns, rookie receiver Rondale Moore looked like a potential star with seven catches for 114 yards and a touchdown, and the defense recovered from a slow start to slow the Vikings considerably in the second half.

Murray also added a running touchdown, topping it with a meditation pose in the end zone. It wasn't the only time he appeared in the zone.

“I see it all out there, it’s slowed down, for sure,” Murray said. "I understand our offense, the guys understand what we’re trying to do. We’re moving as one, for the most part. We’ve just got to clear a lot of stuff up. It’s a long season, so I feel great as far as command, what’s going on, all that type of stuff.”

The hard-fought win over the Vikings was much different than Week 1, when the Cardinals played close to perfect in a 38-13 road win over the Tennessee Titans. But thanks to some good plays and a little game-ending luck, Arizona is still undefeated.

“I was proud of their fight,” Cardinals coach Kliff Kingsbury said. "We’ve got a lot we’ve got to clean up. It wasn’t nearly good enough, but they fought hard.”

Arizona's offense has usually been exactly what it hoped: High-tempo and unpredictable. DeAndre Hopkins and Christian Kirk both caught two touchdowns in Week 1. But in the win over the Vikings, it was A.J. Green, Maxx Williams and Moore who were often Murray's preferred targets. That presents quite a headache for opposing defenses, who will have a hard time guarding all those playmakers on every play.

The Vikings had a good game plan to avoid Arizona's front seven, running Dalvin Cook right through the middle of the defense before edge rushers Chandler Jones and J.J. Watt could make much of an impact. The Cardinals solved some of those problems in the second half and didn't allow an offensive touchdown. Still, Minnesota's success on the ground will provide future opponents with a blueprint for how to attack the Cardinals.

Williams. The Cardinals weren't expected to get a lot of production from their tight ends this season but Williams surprised with seven catches for 94 yards against Minnesota. Williams will never be confused for a burner, but he does have pretty good hands. He could have some productive games with defenses so focused on DeAndre Hopkins, A.J. Green and Christian Kirk.

LB Zaven Collins. The 16th overall pick is still going to be very useful, especially for a rookie, but it's clear the Cardinals don't want to give him too much to handle in these opening games. He played 25 of 61 snaps against the Vikings. The 6-foot-4, 260-pounder is still a huge part of Arizona's future, he just might not be ready for stardom this season.

Rookie cornerback Marco Wilson is dealing with an ankle injury, while right tackle Kelvin Beachum (ribs) was limited in his second straight game. Kingsbury said both players will be evaluated on a daily basis.

62 — Matt Prater is still launching footballs from his foot, even at 37. His 62-yard field goal to end the first half was the longest in Cardinals history and gave them a 24-23 halftime lead. Arizona won't need Prater to do that every week, but it's a luxury to have a kicker who can. Prater also has the longest field goal in NFL history — 64 yards — that he kicked in 2013.

The Cardinals have a 2-0 start despite facing two of the league's premier running backs in Tennessee's Derrick Henry and Minnesota's Cook. Murray needs to cut down on the major errors like his pick-6 in the second half, but the offense still looks formidable. The defense didn't have a great game Sunday, but it bodes well for the future that they were able to make quick adjustments and slow the Vikings in the second half.