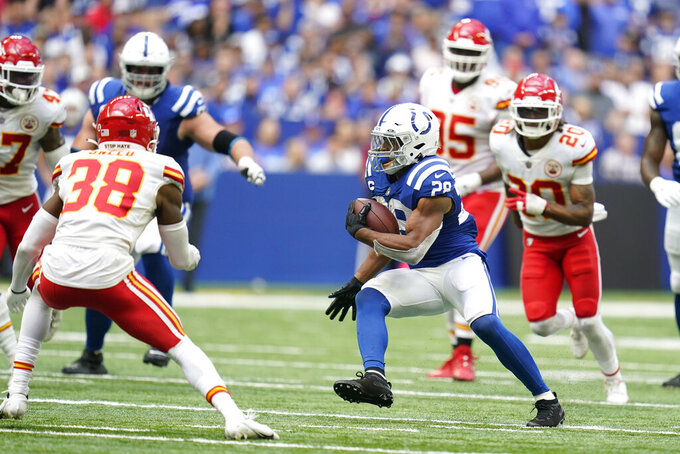 His approach generally worked during his first four seasons. Now, though, everything seems to be out of sync.

New quarterback Matt Ryan is struggling with turnovers, a revamped offensive line has not met expectations, and a young, unproven group of receivers continues to battle inconsistency. Worst of all, Indy's strong ground game has hit a rut.

“If you go back and look at all our runs on first down, a lot of second-and-longs and some third-and-longs,” Reich said Monday. “I feel very confident we’re going to get the run game going. We have a good process, the way we scheme plays, the way we teach it, the players we have. We're making adjustments to players. You guys know how we say it, it takes all 11 in the run game."

So far, Indy (1-2-1) has been unable to overcome the mounting obstacles.

Jonathan Taylor, last year's NFL rushing champ, has one 100-yard game and scored once in the season's first month while averaging a meager 3.34 yards per carry over the past three weeks.

And after a toe injury limited his practice time last week, Taylor left Sunday's 24-17 loss to Tennessee with an ankle injury that could keep him out of Thursday's game at Denver (2-2). If he can't play, the Colts will likely split time between Nyheim Hines and former Bronco Phillip Lindsay.

But the more glaring issue has been the inability to find running lanes.

The results have been underwhelming. Indy ran 23 times for 38 yards against one of the league's lowest-ranked run defenses Sunday. Reich knows those numbers — and the overall ground game — must improve quickly for the Colts to achieve their goals.

Defense. Despite giving up another 100-yard rushing game to Derrick Henry, the Colts limited Tennessee to 52 plays, 243 total yards and pitched a second-half shutout. This group played well enough to win and perhaps the Colts would have prevailed if the Titans hadn't converted two turnovers into 14 points.

Turnovers. Indy has gone from being one of the league's most opportunistic teams to one of the least efficient in turnover margin. A year ago, they shared the league lead at plus-14. This year, they're minus-6, near the bottom of the NFL.

Colts tight ends. Over the past two weeks, Jelani Woods and Mo Alie-Cox have combined for four TD catches and Kylen Granson has produced some big plays, too. The combined total for this trio against Tennessee: 11 receptions, 180 yards, two TDs.

Taylor. The explosive runner hasn't posted a run longer than 21 yards since Week 1 and has struggled to find holes in 15 of Indy's 16 quarters. On Sunday, he produced the third-lowest single-game per-carry average (2.1 yards) of his three-year career.

Linebacker Shaquille Leonard, a three-time All-Pro, and versatile defensive lineman Tyquan Lewis are in the concussion protocol and won't play Thursday night, Reich said. Leonard made his season debut on Sunday. Taylor's status will be determined later this week. It's unknown whether safety Julian Blackmon (sprained ankle) will be available after sitting out Sunday.

65-23. That's the margin by which Indy has been outscored in the first half this season. The Colts have managed to stay competitive because they've played well after halftime.

Indy still doesn't appear to have solutions for its most glaring issues — pass protection, turnovers and a lack of takeaways. Could a Western road trip help turn things around? Perhaps if the short week forces Indy to focus on the basics.