A healthy Barkley back as Giants open minicamp under Daboll 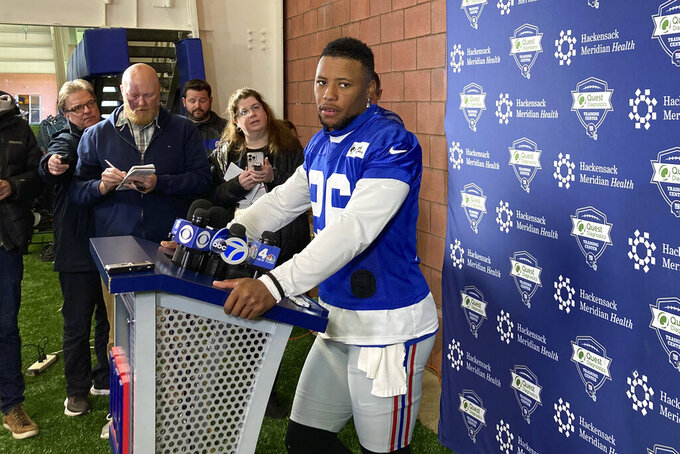 EAST RUTHERFORD, N.J. (AP) — There's something different about Saquon Barkley as the running back approaches his fifth season with the New York Giants.

Unlike last season, no one is asking the 25-year-old whether he is worried about coming back from the ACL and meniscus injuries in his right knee that put his career in jeopardy.

The questions about whether he will be ready for minicamp, training camp or even the start of the 2021 season are history.

Barkley's focus is on 2022 and his first campaign under new coach Brian Daboll, the former Buffalo Bills offensive coordinator. He is not concerned about getting a new contract and whether this is a make-or-break year with the Giants after two frustrating seasons.

“I definitely feel a lot different, a lot better,” he said Wednesday as the Giants held a second day of a voluntary three-day minicamp. “I feel like myself again. Obviously, I don’t want to jump the gun, I just want to keep focusing on the little things and get better every day.”

The past two seasons have been brutal for the second overall pick in the 2018 draft. He was limited to 19 carries and 34 yards in a 2020 cut short by a knee injury in the second game. Coming off the rehab, he rushed for 593 yards, caught 41 passes and scored four touchdowns last season as New York posted a 4-13 record, leading to the firing of coach Joe Judge and general manager Dave Gettleman.

Last season's statistics could be misleading. The Giants' offensive line was horrible. There were not a lot of holes for the backs or time for quarterback Daniel Jones to throw.

New general manager Joe Schoen signed guard Mark Glowinski and center Jon Feliciano in free agency and it is hoped New York will take a tackle in the first round as a bookend to Andrew Thomas.

The offense that Daboll is bringing from Buffalo uses the running backs to catch passes, and Barkley is good at that. He had 91 catches as a rookie in 2018. He also caught a circle route out of the backfield on Wednesday for a touchdown and high-fived Daboll after the play.

Barkley said his focus is to stay healthy by keeping his body in shape.

"I’ve got to worry about taking care of all my body parts so I can be healthy — because I know when I’m healthy I know what I can do for this team and what I’m able to bring to the table,” Barkley said.

Barkley has taken part in the Giants voluntary offseason program.

“He’s been here. Great in the meeting room,” Daboll said. “He’s elusive, quick, he’s fast. Again, we’ve had 12 plays in seven-on-seven here, a couple individual periods. But excited to work with him.”

Receiver Kenny Golladay said he started to get excited about Barkley last season.

“Toward the end of last season, you start seeing that same 2-6,” Golladay said. “As of now, he’s healthy, had a full offseason to get his body right. I’m excited. I was excited for him last year. I’m even more excited for him this year.”

Barkley seemed to be the league's next great back in his rookie season. The Penn State product rushed for 1,307 yards and 11 touchdowns in winning the NFL Offensive Rookie of the Year. He rushed for 1,003 yards in 2019 despite missing three games because of a sprained ankle sustained against the Bucs in September.

The numbers have slipped in recent years as the Giants have struggled on the field, missing the playoffs the past five seasons with losing records.

“I want to go out there and prove to this organization that the player they drafted is still there, I can still do special things with the ball in my hands, and I can help this team,” he said, adding he wants a long career and he would like it to be with the Giants.