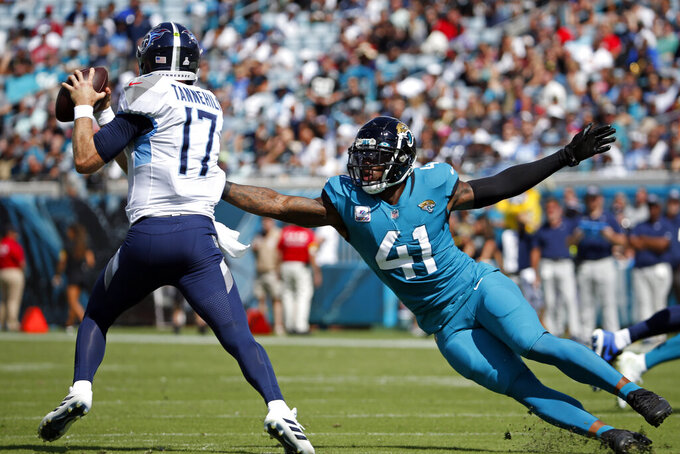 The 2020 AP Offensive Player of the Year is leading the NFL with 640 yards rushing. He's atop the league with 142 carries and seven touchdowns, and he scored three more in a 37-19 win in Jacksonville in an almost pedestrian performance for Henry with 29 carries for 130 yards.

“Derrick understands what his responsibility is to this football team and how to prepare,” Titans coach Mike Vrabel said Monday.

“We just have to try to be as smart as we can with recovery and how it's going in the game and how he feels. Then there's a fine line there between knowing what he needs and the impact he has throughout the course of the game. You see how he ran in the fourth quarter."

The Titans have had to lean on Henry with Vrabel busy piecing together lineups after learning who's healthy enough to play each week. It hasn't been an easy task even with the NFL giving teams more flexibility with the injured reserve list.

The Titans (3-2) have 16 players currently on injured reserve and had 23 on the final injury report last week.

Seven-time Pro Bowl wide receiver Julio Jones has missed two straight games with an injured hamstring. Outside linebacker Bud Dupree, the big free agent signee, has sat out the last three as he recovers from a torn ACL that ended his 2020 season.

The Titans have an extra day to rest this week. They host the Buffalo Bills (4-1) next Monday night, and managing the week's schedule to help players be as fresh as possible is near the top of Vrabel's to-do list.

The run game, aka Henry. He now has more yards rushing over a 40-game stretch than any other running back in league history.

The Titans' run defense. Vrabel said the Titans missed 15 tackles, and Jaguars running back James Robinson gashed Tennessee for 149 yards, averaging 8.3 yards per carry. Five Titans also had a chance, but failed, to tackle receiver Laviska Shenault on a 58-yard catch and run. Four Titans had Shenault surrounded at midfield near a sideline and still couldn't stop him early in the fourth quarter.

Harold Landry III is forcing the Titans to think about signing him to an extension as soon as possible. The fourth-year outside linebacker leads the team with 4 1/2 sacks after getting two against the Jaguars. According to Pro Football Focus, Landry also is the only player in the NFL with at least five quarterback pressures in each game this season.

A.J. Brown. The 2020 Pro Bowl wide receiver returned after missing two games with a hamstring injury. But he caught three of the six passes thrown to him for 38 yards. Brown was on a snap count that limited him to 41 of 64 offensive plays.

20 — Tannehill was sacked three times by the Jaguars and has gone down the most of any quarterback in the NFL. Tannehill also has been hit 39 times, more than any other quarterback in the league. The Titans' injury report is long enough as it is, and they certainly need to better protect the man who helped put the offense into overdrive.

The Titans head into the toughest stretch of their schedule. They host Buffalo, followed by a visit from Kansas City six days later. Then they go to Indianapolis before a prime-time game in Los Angeles against the Rams on Nov. 7.

The defending AFC South champs currently have the divisional lead. Staying there could depend on how they handle these four games.