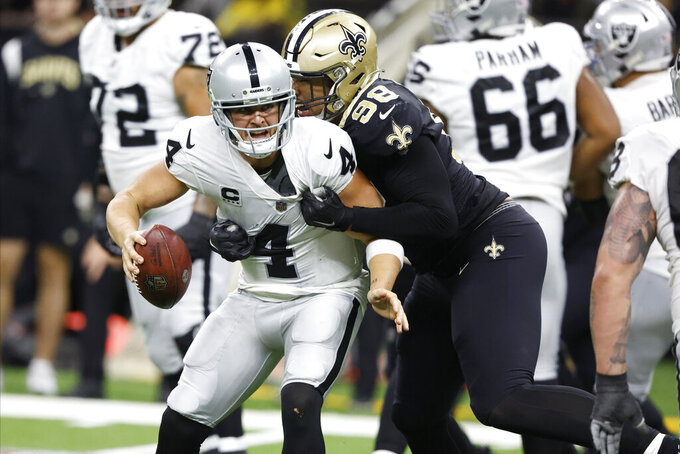 The two star running backs had memorable games on Sunday with Henry rushing for 219 yards and two TDs against Houston and McCaffrey having a rare touchdown Triple Crown against the Rams.

Henry had his sixth career game with at least 200 yards on the ground, tying Hall of Famer O.J. Simpson and Adrian Peterson for the most in NFL history.

Henry has also run for at least two TDs in all six of those 200-yard games — twice as many games with at least 200 yards rushing and two TD runs than any other player in history.

Perhaps even more noteworthy is that four of those have come in his last four games against the Texans, meaning Henry has more 200-yard, two-TD games against Houston than any other player has in their entire careers. Hall of Famers Jim Brown, Barry Sanders and LaDainian Tomlinson did it three times.

McCaffrey matched another mark held by Tomlinson when he threw, ran and caught a touchdown, becoming the fourth player since the merger to do that in a single game. The last to do it was Tomlinson against the Raiders in 2005.

David Patten also did it for New England in 2001 against Indianapolis and Walter Payton did it in 1979 against Minnesota.

McCaffrey became the first player to do it while having at least 30 yards rushing, passing and receiving since Gene Gedman did it for Detroit against San Francisco in 1958.

Big-play touchdowns are eluding the Pittsburgh Steelers early this season.

Pittsburgh's longest offensive touchdown of the season was an 8-yard throw from Mitchell Trubisky to Pat Freiermuth in Week 2 against New England. Six of the Steelers other 10 TDs on offense came from inside the 5, along with two 6-yard scores and a 7-yard pass from Kenny Pickett to George Pickens.

There seemed to be an invisible fence at the 50-yard line for the Raiders offense at New Orleans.

The Raiders failed to cross the midfield stripe for the first 58 minutes of a 24-0 loss to the Saints. Las Vegas didn't run its first play in New Orleans territory until garbage time after the two-minute warning, the second longest a team has gone without crossing the 50 in the past 16 seasons.

Carolina kicker Eddy Piñeiro had a game he'd like to forget.

Piñeiro missed an extra point with 12 seconds left in a tie game after a penalty backed the kick up 15 yards and then missed a 32-yard field goal in overtime in a loss to Atlanta.

That marked just the second time in the past 20 seasons that a kicker missed a potential go-ahead extra point in the last 30 seconds of regulation and a potential game-winning field goal in overtime.

The only other time it happened was in Week 1 when Cincinnati's Evan McPherson did it in a loss to Pittsburgh.

Tom Brady added another record to his resume.

Brady was sacked three times last Thursday, giving him 556 in his career — two more than Ben Roethlisberger for the most for a quarterback in NFL history.

Brady has also been sacked by a record 384 players over his career — one more than Roethlisberger.

Building a big lead hasn't been a problem for the Baltimore Ravens this season. Keeping it hasn't always gone as well.

The Ravens became the ninth team to take a double-digit lead in each of the first eight games of the season.

While the previous eight combined for a 62-2 record, Baltimore is only 5-3, having blown leads to Miami, the Giants and Buffalo.

Murray became the third player to appear in two games in London in the same season, following u his trip with New Orleans in Week 4 with one with Denver on Sunday.

The only other players to play twice in London in the same season were Gareon Conley (2019) and Adrian Peterson (2017).

Murray made the most of his trips abroad, running for a TD in both games and getting the win each time.