Herbert, new coach Staley look to get Chargers back on track 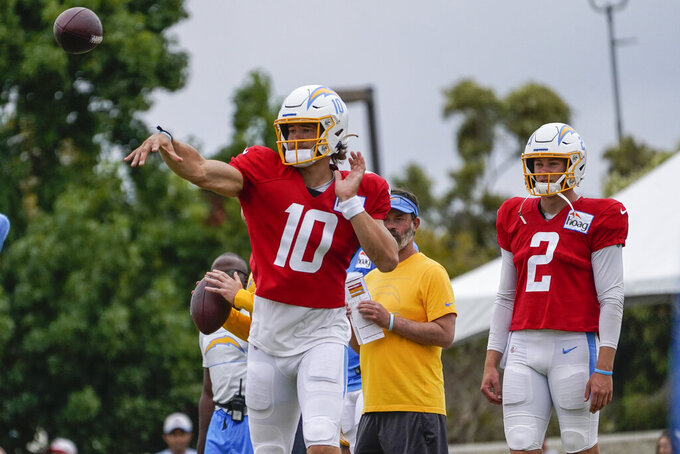 COSTA MESA, Calif. (AP) — Justin Herbert and Brandon Staley have created plenty of buzz around the Los Angeles Chargers. Whether both can help lead a turnaround after two disappointing seasons remains one of the more intriguing questions in the AFC going into the Sept. 12 opener at Washington.

Herbert looks to take another step forward among the league’s top quarterbacks after winning AP NFL Offensive Rookie of the Year honors last season. He has an emphatic supporter in Staley, who was hired as coach in January after one season as Los Angeles Rams defensive coordinator.

“It’s always a tough situation when you bring in a new staff and a lot of new players, but I feel like they’ve done a great job of building relationships with our team,” Herbert said. “We had a lot of good work in the offseason. All of the guys were committed, showed up and did a lot of great work.”

Herbert — who threw for a rookie record 31 touchdowns last season — will run a more up-tempo offense while also taking advantage of his ability to throw deep and make plays on the run. Herbert’s 10 touchdown passes on throws of at least 20 yards are the most by a rookie since 2006, according to Sportradar.

Joe Lombardi’s scheme also features more personnel groups and formations, putting more on Herbert’s plate. But for Herbert, who won college football’s version of the academic Heisman in 2019 — it is a challenge he enjoys.

“We’re going to utilize his big arm. We’re keeping the defense on their heels, especially when a new personnel group comes in while you’re in the huddle,” Lombardi said. “By the time they figure out who’s in the huddle, they’re trying to get their call in. We’ll already be breaking and then the ball snaps. The less time you give the defense to think about it, the better.”

Herbert has plenty of weapons with running back Austin Ekeler and wide receivers Keenan Allen and Mike Williams. They also came out of camp without significant injuries, which was Staley’s primary objective during the preseason.

“I do feel like we’re on schedule as a team. I know in all three phases of the game that people know how we want to play. I feel and see that full investment,” said Staley, who replaced Anthony Lynn after he went 5-11 in 2019 and 7-9 last year after reaching the divisional round in 2018.

After Herbert, Derwin James was one of the first players Staley reached out to after being named coach. The fourth-year safety is looking to bounce back after missing last season due to a knee injury.

James, an All-Pro selection as a rookie in 2018, will play various spots in Staley’s defense and could be a rush end at times. It is similar to how Florida State used James in college.

The most significant difference is that James will also be calling the plays in the huddle after getting them from Staley.

“We want to be the No. 1 defense in the league. If that’s not our goal, then I don’t know what is,” James said.

The Chargers made a considerable investment to their offensive line with three signings in free agency and the selection of left tackle Rashawn Slater in the first round.

Corey Linsley became the league’s highest-paid center, while guards Matt Feiler and Oday Aboushi have added some stability to the interior. Slater, the 13th overall pick in the draft, looked solid in the first preseason game against the Rams.

Any improvement from the line would be welcome after Herbert was constantly under pressure last season. The starting group appears set, but there remain depth issues.

With the Chargers switching to a 3-4 base defense, Joey Bosa won’t be lining up with his hand on the ground on every play. There will also be some snaps where the talented rush end will drop back in pass coverage, which is something new for him.

“It’s a fun challenge going into year six teaching an old dog new tricks. I didn’t didn’t think it was possible, but I guess it is,” Bosa said. “I need to see the formation and see the field more on first and second down, but I’m comfortable. When it’s time to make money, I’m going to have my hand in the dirt memory flying off the ball.”

Los Angeles has a tough opening six-game stretch before the bye week as it takes on four teams — Washington, Kansas City, Cleveland, and Baltimore — that made the playoffs last season. The only one not on the road is against the Browns on Oct. 10.

The other two games — Dallas and Las Vegas — aren’t pushovers by any stretch, either.