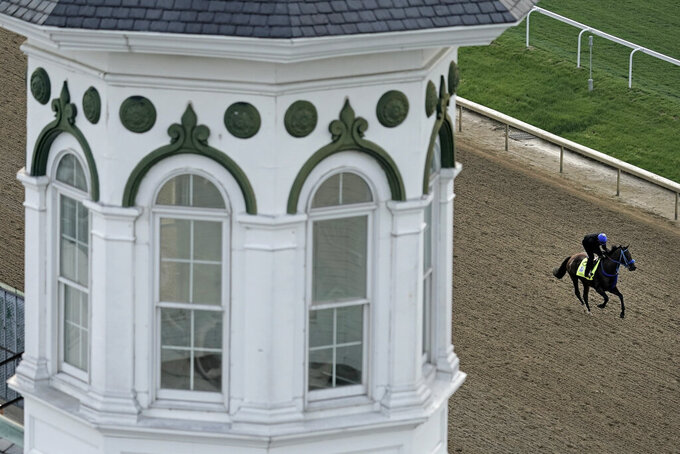 Kentucky Derby entrant Simplification works out at Churchill Downs Thursday, May 5, 2022, in Louisville, Ky. The 148th running of the Kentucky Derby is scheduled for Saturday, May 7. (AP Photo/Charlie Riedel)

LOUISVILLE, Ky. (AP) — With interest among the general public at its highest with the 148th Kentucky Derby coming up Saturday, horse racing is once again under intense scrutiny.

The industry has been rocked by scandal in recent years, including the disqualification of last year’s Kentucky Derby winner, a horse doping conspiracy involving trainers and veterinarians, and the punishment of its highest-profile trainer.

The sport’s seeming inability to police itself drew the attention of the federal government in 2020. The result is the Horseracing Integrity and Safety Act set to go into effect July 1.

The act will be implemented in stages, with the racetrack safety program starting immediately. The antidoping and medication rules aren’t expected to begin until early 2023, leaving states in charge for now.

"We have to do it,” said Tom Rooney, new president and CEO of the National Thoroughbred Racing Association. “We have to have the same standards in every jurisdiction.”

Unlike the central offices that govern the NFL, NBA, MLB and NHL, the 38 U.S. racing states operate under patchwork rules that vary from track to track. Horses, owners, trainers and jockeys move frequently between states to compete. Locales honor punishments meted out elsewhere, but inconsistencies can create confusion and make it possible to game the system.

Hall of Fame trainer Bob Baffert is serving a 90-day suspension imposed by Kentucky racing officials that will keep him out of the Derby on Saturday, a race he’s won six times. The punishment came after 2021 Derby winner Medina Spirit failed a post-race drug test. The colt was later disqualified.

East Coast trainer Jorge Navarro is serving five years in prison for his role in a horse doping conspiracy. He also was fined $25.8 million.

Trainer Jason Servis is set for trial next year as part of the same case. He has declared his innocence. Servis trained 2019 Kentucky Derby winner Maximum Security, who was disqualified for interference during the race.

Navarro and Servis were among over two dozen people indicted after a lengthy FBI investigation.

Despite such hits to the sport’s reputation, there appears to be growing trepidation in the industry over the prospect of sweeping change brought by HISA.

The program has already been challenged in the courts, with two lawsuits seeking to kill it.

In late March, a lawsuit filed by the National Horsemen’s Benevolent and Protective Association and a group of its affiliates questioned HISA’s constitutionality. It was dismissed by a federal judge in Texas and is being appealed.

The second suit filed in Kentucky by the state of Oklahoma and eight other states is similar to the NHBPA’s suit. It has yet to be heard.

Whether the implementation of HISA is a reaction to placate vocal critics or representative of meaningful change is an ongoing debate within the industry.

"As trainers, we have mixed emotions because we’re going to have people making decisions that aren’t very educated in our sport,” said D. Wayne Lukas, a Hall of Fame trainer. “It just seems hard to tell where they’re going to go.”

Rooney, a former Republican congressman from Florida, believes training fresh eyes on the sport is crucial.

“Having a large group of people who are not horse people is a positive as long as they’re not out to hurt the industry,” he said. “They’ve agreed to sign on to this board to help horse racing succeed.”

“I worry that all the decisions are being made by people that have other forms of income and would be eliminating people like my family, where lower-level racing was all of the income,” he said. “I would think that would be very negative for the sport going forward.”

Trainer Tim Yakteen is based in California, where some of the strictest rules involving medications, drug testing and veterinary examinations were enacted after dozens of horses died at Santa Anita in 2019.

"I embrace what we have coming our way because I think it will create unity amongst our industry. It should benefit us because we have been very much fragmented,” said Yakteen, who has two horses in the Kentucky Derby. "I’m hoping that this unity that we’re starting with will carry over into other aspects of our industry that can be capitalized on.”

HISA is in a headlong rush to the starting gate with the July deadline fast approaching.

Lisa Lazarus began her job as CEO of HISA’s board of directors in mid-February. She completed her first major task this week: hiring an independent enforcement agency to oversee the antidoping and medication rules.

After negotiations with the U.S. Anti-Doping Agency fell through, HISA chose Drug Free Sport International, a Missouri-based company that works with the NFL, NBA, MLB and NASCAR, among other leagues. The company will set up an integrity and welfare unit overseen by a five-member advisory council, headed by Jonathan Taylor, a London-based attorney with experience in antidoping in international sports.

California, Kentucky and Minnesota are the first states that have agreed to work with HISA by paying their prorated share of costs.

“We're close to reaching agreements with the vast majority of racing commissions,” Lazarus said. "We’re learning as we go, but we’ve made a lot of headway.”

A cleaner and fairer sport may boost horse racing’s popularity among a younger generation and help it cash in on the online sports betting gold rush.

"Maybe we can get our fanbase built up,” Yakteen said.

HISA’s greatest influence may be in leveling the playing field.

"We need to show the world we’re doing everything we can to protect the athlete, the jockeys and the integrity of the sport,” Rooney said.

AP Sports Writer Gary B. Graves contributed to this report.