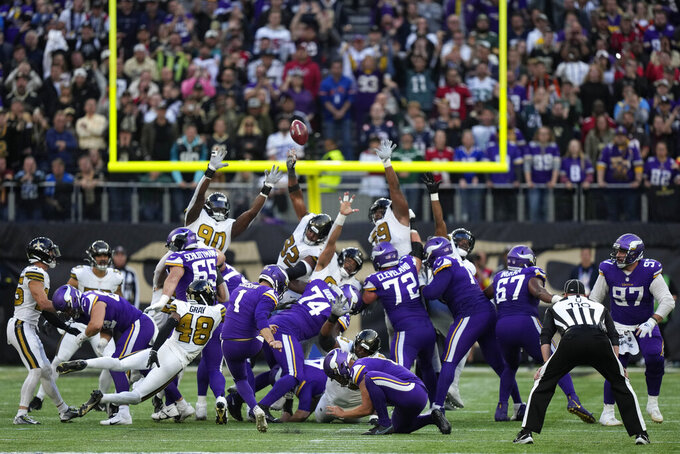 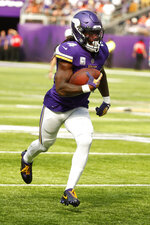 His top two quarterbacks, Tua Tagovailoa and Teddy Bridgewater, are in the concussion protocol. The Dolphins have lost two straight after starting 3-0. And Miami will start a rookie quarterback Sunday against the Minnesota Vikings (4-1).

McDaniel, in his first head coaching job, said there’s no time to feel sorry for himself.

“Being in the National Football League, whether you’re a coach or a player, is hard,” he said. “All things that are worth achieving are hard. I think I would feel guilt and feel as though I was shortchanging the Dolphins and the team if I was spending any time thinking about how hard it is.”

Overcoming adversity, for better or worse, is what the Dolphins will need to do on Sunday against the NFC-North leading Vikings, who under new coach Kevin O’Connell are off to their best start since they went 5-0 in 2016.

With Skylar Thompson at quarterback, the Dolphins will hope to build on last week’s best rushing output of the year and correct their issues in defending the pass.

That won’t be easy against Pro Bowl receiver Justin Jefferson.

Through five weeks, Jefferson leads the NFL in receiving yards with 547 and is second in receptions with 40. He has eight catches of at least 20 yards.

Quarterback Kirk Cousins has been steady, and O'Connell said the Vikings' offense has been consistent because opponents can't be sure if they need to worry about Jefferson or a running game led by Dalvin Cook.

“I think we’ve been able to establish some foundations in our run game that’s allowed us to have some things off of those things to apply pressure to the defense,” O’Connell said. “You’re seeing Kirk kind of control a lot at the line of scrimmage, get to our whole offense at the line of scrimmage and that’s really what we want to be.”

Cook will play in his native Miami for the first time in his NFL career, with relatives and friends planning to be at Hard Rock Stadium. Cook played there a few times for Miami Central High School when big games dictated a move to a bigger venue. He played against Miami in college at Florida State and never lost to the Hurricanes.

“It’s always good getting back into some warm weather. Minnesota is upon us right now, as you can tell by the way I’m dressed,” Cook said Wednesday, wearing a hooded sweatshirt underneath his purple practice jersey and a black stocking cap on his head. “It’s going to be a good Sunday. Go down there, play some good football, get a win and get out of there.”

Minnesota’s Greg Joseph was the NFC Special Teams Player of the Week after going 5 for 5 on field goals against New Orleans in London on Oct. 2, though he missed an extra point. Sandwiched around that performance has been a pair of missed field goals against Detroit on Sept. 25 and against Chicago last Sunday.

Those failed attempts came from 56 yards (wide right), 56 (wide right), 53 (wide right) and 51 (blocked). O’Connell said he could “do a better job of maybe playing the field position game at times” to keep Joseph from having to try lower-percentage kicks.

“My confidence in Greg will not waiver. I expect him, when he goes out there, to make those kicks. And I’m going to continue to give him opportunities,” O’Connell said. “Because you just never know when those three points can be a difference-maker, like it was in London for us, or at other times during the season. We’d love to give him some more chip-shot type of field goals.”

McDaniel admitted after last week’s loss that Thompson’s debut was rough. He completed 19 of 33 passes for 166 yards without a touchdown, with an interception and a lost fumble.

McDaniel said some of Thompson’s struggles were about footwork or timing, a natural result of his first regular-season action.

Thompson also didn’t have the benefit of a veteran quarterback on the sideline to help coach him through the game since both Bridgewater and Tagovailoa were out. Bridgewater was injured on the Dolphins’ first offensive snap.

If Bridgewater clears the concussion protocol, he is expected to be active on Sunday and serve as Thompson's backup.

“It might be one word, it might be a pat on the back,” McDaniel said. “That teammate support is a very immensely huge thing for a player like that.”

Thompson and his teammates are certain Sunday's game will be better.

“For me to have a week to build that, build confidence with the guys,” Thompson said, “and build that trust and timing is going to be really, really important.”